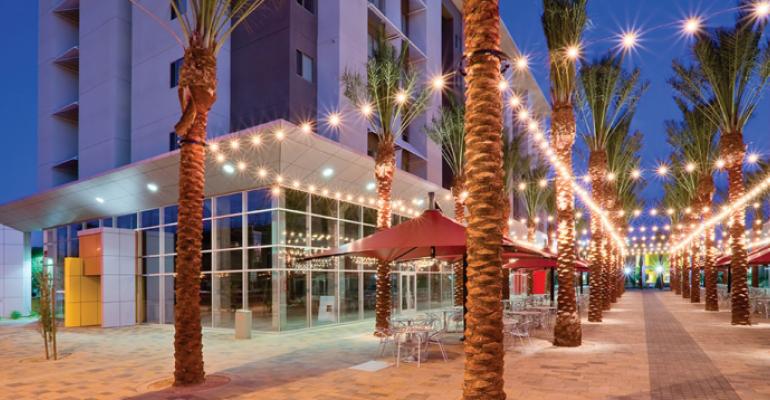 As Projects Get More Expensive, Student Housing Developers Focus on the Most In-Demand Amenities

A good site close to the campus is still the most important feature for a new student housing project.

Development sites are getting more expensive and student residents are more sensitive to the rising rents. That means that once a developer has paid for a good site, it may be a struggle to get more amenities into the property, especially ones that require a great deal of space.

“It takes more creativity from the developer and architect to piece together land for a student housing project [that] make sense,” says Greg Faulkner, president for Humphreys and Partners Architects. “In many cases we’ve had to work around existing buildings, creating a unique footprint.”

Small, expensive sites often require developers to build taller mid-rise or high-rise buildings, which involve more expensive construction. “Land prices have been bid up and construction costs continue to skyrocket, so deals in core locations can be very thin from a return perspective and execution needs to be perfect,” says J.J. Smith, president of CA Student Living, an investor, developer and manager of student housing properties.

The extra expense means developers will probably need to charge higher rents that not every student will be able to pay. Some are making the numbers work by creating smaller new projects.

Other developers are simply creating buildings with smaller units. “We are seeing an increased focus on micro-units ranging from 300-to-400 square feet of space—particularly in supply-constrained markets, or in markets where there is a higher proportion of international students,” says Smith.

The challenge of finding a good place to build is also creating a struggle to find room for the kind of amenities that students demand. More expensive sites also leave less money in the development budgets for expensive amenities. “Tough choices have to be made on everything, from how much amenity space to program to the level of finishes and furnishings,” says Smith.

Higher rents can’t solve that challenge in many parts of the country. Though occupancy rates are still high on average, the markets around many universities are already crowded with extremely expensive new properties. “Decisions are more heavily weighted toward heightened sensitivities around rental price points and how we can program communities that are attainable to a larger population of a target market,” says Smith.

Internet service is one amenity that at least does not take up extra space. “As technology changes, developers are focusing on removing cable television service, while increasing internet bandwidth,” says William Vonderfecht, associate director of national student housing with CBRE.

They are also trying to get the most out of their community spaces. “Group and private study areas and fitness centers remain our highest demanded spaces, but both are secondary to location,” says Smith. “An outdoor space is a must, whether it’s a pool in warmer climates, or fire pit with seating in cooler climates.”

“High-end gyms and resort-style lounge areas are becoming standard. We’ve also seen a big emphasis on a place to study or work together in groups,” says Faulkner. “It truly is about making each property a community where students can live and play, but also get their schoolwork done.”