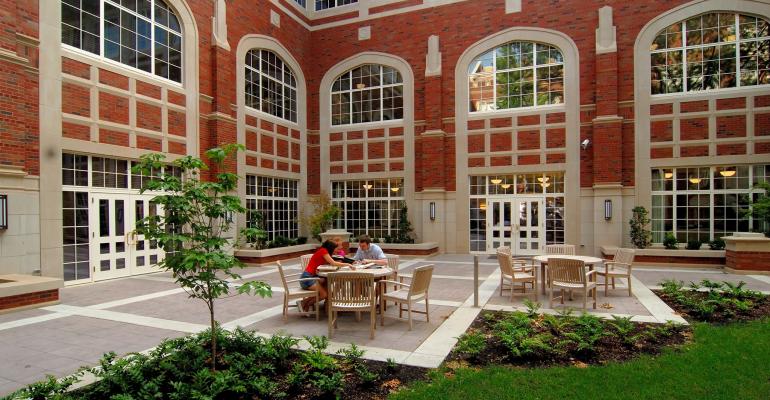 University of Oklahoma Is Weighing Rent Subsidies for Troubled Dorm

The project was too slow to cut rents and had trouble attracting students earlier this year because it was still under construction.

(Bloomberg)—The University of Oklahoma may help a struggling municipal-bond financed luxury dorm by offering housing "scholarships" to help students afford rental payments, university administrators and the non-profit owner of the project said on a conference call with investors.

The university, which has about 27,000 students on its main campus in Norman, is also weighing whether to allow first year students to live in the 1,230-bed complex or reduce occupancy in other dorms. The new apartment building, known as Cross, opens in August and is just 28 percent leased. It features a "blow dry bar and salon," cycling studio, cafe and a Lululemon store.

"We are keenly aware of the challenges that Cross is facing," Steve Hicks, chief executive of Baton Rouge, Louisiana-based Provident Resources Group, a non-profit that financed the student housing with $250 million of municipal bonds, said on the call late Tuesday. “We have complete confidence that we have the right team to address these issues, these challenges and to effectively address them in the coming months."

The Oklahoma project and another municipal-bond financed complex at Texas A&M, which had to slash rents to fill beds, underscore the risk to investors of overbuilding luxury accommodations as students become more cost-conscious. While many universities have tapped outsiders to finance and build dorms to conserve money for academics, the University of Oklahoma project shows that developers will turn to the universities for assistance if projects falter.

In late May, S&P Global Ratings downgraded the dormitory bonds to BB, two steps into junk, and left a negative outlook on the securities, signaling they may be cut deeper. Some of the taxable securities due in 2037 last traded for an average of 88 cents on the dollar, down from about 109 cents in October.

Cross is opening in a housing market in Norman that "is very different," than originally anticipated, said Marty McBurney, an assistant vice president at a unit of Balfour Beatty Plc, which built and manages Cross Village. The average occupancy for off-campus student housing is 74 percent and competitors have cut rents by as much as $100 a month.

“Competitors lowering their rates definitely had an impact on our rates," McBurney said.

Cross was too slow to cut rents and had trouble attracting students earlier this year because it was still under construction and prospective residents couldn’t tour it, said Provident and Balfour executives.

Provident has hired a consultant to review and improve advertising and the university is marketing the complex to prospective transfer students, executives said. But there is a limit to the university’s assistance: Oklahoma won’t require sophomores to live on campus or return a $20 million lease payment, officials said.

There’s no danger of imminent default on the bonds. Cross has enough money to pay debt service in 2018 and 2019. Provident is forecasting 60 percent occupancy in 2019.

The university must analyze the impact of opening Cross to first year students on the revenue that supports existing dorms and the debt that financed them, said Chris Kuwitzky, the university’s chief financial officer.

“We can’t do anything that would harm the debt service coverage ratio on that debt," Kuwitzky said, adding he expected to report back to investors in 30 to 60 days.

Provident and its banker Royal Bank of Canada are also studying the feasibility of buying some of the university’s existing dorms to crate a "housing system." Provident would finance the purchase by selling new debt backed by revenue of the portfolio, allowing it to "cross-collateralize" the assets and revenue stream for the new bondholders.