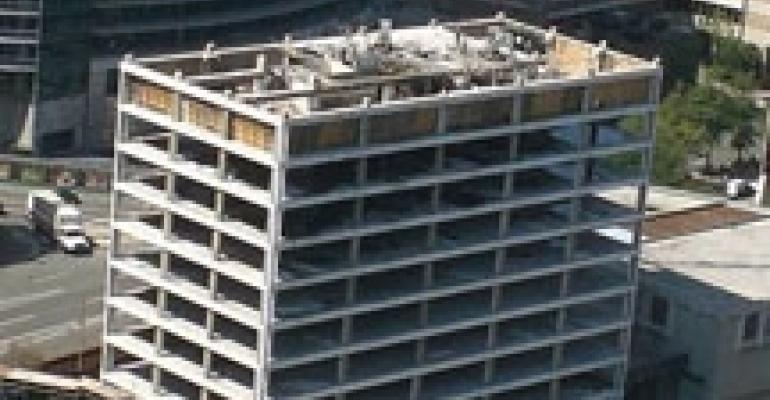 For many commercial real estate developments and every remodeling job, demolition offers developers and landlords their earliest opportunity to conserve resources and minimize the impact of a green building project on the environment.

Torn-down commercial and residential buildings take up huge swaths of landfill space each year. The nation generated 136 million tons of demolition and construction debris in 1997 alone, according to U.S. Environmental Protection Agency estimates. That’s almost two-thirds as much as the 209 million tons of municipal solid waste generated in the same year.

That’s why New York-based Monday Properties chose not to begin with a wrecking ball in order to remove an 11-story office building from the site where it plans to construct a 580,000 sq. ft. office tower in Rosslyn, Va. The company has been systematically abating and deconstructing the existing structure virtually by hand for several months, effectively hollowing out the building from the inside out and then removing the exterior walls in preparation for the final demolition.

“Monday Properties was determined to complete the demolition of the existing structure at 1812 North Moore Street in a sustainable manner,” says Tim Helmig, chief development officer for Monday Properties. “Although it takes longer to demolish a building this way, it is inherently a cleaner process and far less damaging to the environment and surrounding buildings.”

The new project, 1812 North Moore Street, has been designed by DCS Architects to be the tallest office building in the Washington, D.C. area when completed in 2011. But first, crews are busy removing every recyclable material from the structure, from wiring and mechanical systems to glass, carpets and steel.

Monday Properties is seeking Leadership in Energy & Environmental Design (LEED) certification for the new building from the U.S. Green Building Council, and hopes to make it the first office building in Virginia to receive LEED platinum level certification. The Green Building Council gives credits toward LEED certification to new projects that divert at least 50% of construction and demolition debris away from landfills, with additional credit given to projects that divert 75% or more.

Recycling is only part of a green demolition, however, says Marc Heisterkamp, manager of corporate and investment real estate at the Green Building Council. The other side of the equation is reuse of existing structures and non-structural components, such as mechanical systems and fixtures. “Certainly the best approach from an environmental perspective is to use existing elements,” Heisterkamp says.

The Green Building Council provides credit toward LEED certification to projects that retain at least 75% of existing walls, roofs or floors in a reconstruction or significant renovation. Builders who manage to use 95% or more of the shell structure earn even more credit toward LEED.

Architecture firm Gensler designed the new 2000 Avenue of the Stars office building in Century City, Calif. to incorporate 60% of the support columns already in place under a building that was removed to construct the new project. Developer The Trammell Crow Co. implemented an extensive recycling and reuse plan as part of the construction, which replaced the outdated ABC Entertainment Center with the 790,000 sq. ft., $400 million Avenue of the Stars complex.

“We recycled everything in the building that wasn’t asbestos-laden,” says Brad Cox, managing director in Trammell Crow’s Los Angeles office. The developer wrapped the older building in plastic during asbestos abatement to protect air quality in the neighborhood, and then removed all asbestos products and materials according to EPA regulations. To boost recycling, the developer also removed asbestos coatings so that structural steel could be recycled.

Crews in the past had to sort demolition debris on site before it could be sent to recyclers, she says, but recyclers have grown more efficient in recent years and many now offer to accept bulk recyclables and do the sorting themselves. A contractor must pay about $20 more per ton of mixed material to have it sorted by the recycler, but that saves valuable time and space at the job site, according to Nancy Brewer, an associate at Trammell Crow who worked on 2000 Avenue of the Stars. “It’s worth the time saved,” she says.

Recycling avoids tipping fees, or what a landfill charges per truckload of material it accepts, and that mitigates some of the added costs that stem from labor required to deconstruct a building rather than simply knocking it down. What’s more, the high prices being paid for scrap steel and copper help the recycling aspects of a demolition pay for themselves. “It’s either a wash or you make money,” Brewer says.

Remodeling offers excellent opportunities for green demolition methods, as it did for Houston developer and property manager Hines when that firm rebuilt the interior of two floors in the Williams Tower to expand its headquarters in 2007. The company filled four, 30-yard containers with metal for recycling and sent 29,470 pounds of carpet back to the manufacturer for re-use in other products, according to Alan Cranfill, Hines’ manager of corporate services.

Rather than discard acoustic ceiling tiles in the space, Hines carefully stacked and stored 26,000 sq. ft. of them on palates for later use in other offices in the Williams Tower. The company sent another 4,000 sq. ft. of the tiles, which were a discontinued pattern, back to the manufacturer for reuse. “We also reused materials such as the existing ceiling grid, electrical conduit, door hardware, glass doors and panels as well as above-ceiling HVAC units and ductwork,” Cranfill says.

Hines’ green demolition experience took a little more time than a conventional approach to prepping a space for renovation, Cranfill says, but the extra cost was negligible. Now that Hines and its contractors have established relationships with recyclers and have nailed down their own procedures, he says future green demolitions will go faster and at only a marginally higher cost than old-style demolition.

Green demolition is becoming mandatory in some cities. In San Diego, Calif., developers must post a sizable deposit based on square footage with the city as a condition of obtaining a building permit. To retrieve the deposit upon completion of construction, the developer must demonstrate that at least 50% of construction debris and demolition material were recycled rather than landfilled.

In practice, construction site debris is delivered to one of several city-approved service providers who then sort and recycle the material before taking what isn’t recyclable to a landfill. The practice avoids tipping fees and provides a simple process builders can follow to achieve compliance.

“They’ve done a pretty good job of it,” says Patrick Willette, a project manager at Johnson & Jennings General Contractors in San Diego. “The city had to do a lot of due diligence to assure there were services in place that the construction community could take this stuff to, and that would comply with the city’s requirements.”

Rather than set up an expensive enforcement infrastructure to catch and penalize violators, San Diego’s deposit system has put the burden on contractors to demonstrate their compliance with the city’s recycling objectives. Willette believes the program offers an effective model for other cities to emulate.

“Diverting material from the landfill is the critical first step to extending the life of the landfill,” Willette says. “The way the city has gone about this with the refundable fee, that’s hitting you where it hurts.”