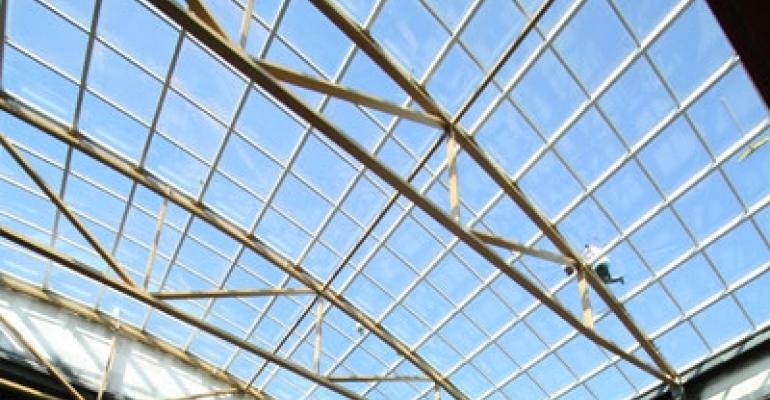 Destiny USA isn’t only the name of the project that’s on track to become the largest LEED Gold-certified retail building in the country and the first to boast only LEED Gold-certified tenants, it might also be a metaphor for the evolution of the American shopping mall.

Or so Pyramid Cos. developer Robert J. Congel hopes. When Destiny USA opens in Syracuse, N.Y. in spring 2012, it will replace the 21-year-old Carousel Center mall and the former adjoining “Oil City,” a 120-acre oil tank wasteland and scrap yard and longtime local eyesore, which Congel remediated in partnership with the City of Syracuse.

Congel, a Syracuse native and founder of Pyramid Cos., which owns 17 malls in the Syracuse area, including Carousel Center, has undertaken Destiny USA as his company’s premier green project following a personal interest in green building that began with a conference held in his home in 2002, says Destiny USA executive Sara Wallace.

According to David Aitken, Destiny USA executive in charge of development, Congel initiated the project because having grown up near Oil City “makes him very passionate about developing an environmentally sustainable and energy-efficient project” and one that promotes regional economic development.

Upon completion, the 2.4-million-sq.-ft. Destiny USA will encompass a newly retrofitted 850,000-sq.-ft. Carousel Center plus a 1.55-million-sq.-ft. expansion with LEED Gold-certified exterior and interior constructed using 23,000 tons of 95 percent recycled steel and 270,000 gallons of biodiesel fuel.

Aitken says that green elements are already being incorporated as much as possible into the original Carousel Center. “It’s a green retrofit,” adds Wallace, “and we’re striving for LEED certification there too.”

The new building has been designed for consumer convenience, says Aitken, and features 47-ft.-wide thoroughfares with carpeted areas for seating. Restaurants on the first floor will spill out onto the thoroughfare to create outdoor areas, and a three-story glass atrium, along with several large glassed-in roof sections will provide natural lighting to “ensure perfect weather year-round, since Central New York winters tend to be very long and very dark,” says Wallace.

In addition to its green components, Destiny USA looks to offer some economic benefits to the region. Oxford Economics projects that 1,600 full-time jobs will have been created upon completion of the facility.

Currently, the adjoining 120 acres are being used as satellite parking areas during the holiday season, explains Wallace, but Destiny USA plans to develop that area to accommodate both new hotel developments and permanent parking spaces for the expected influx of new visitors.

Central New York has the third densest population in the U.S., Wallace explains, and people are used to traveling considerable distances for shopping and entertainment. In addition, the area has a strong university population. Once completed, Destiny USA will extend its draw of destination shoppers and tourists from Albany to Buffalo and into Northern Pennsylvania and Canada.

Destiny USA will offer many retail innovations as well. The mall will mix traditional and luxury outlet shopping with dining and entertainment, and bring outlet stores indoors, creating an “all-in-one experience,” says Wallace.

All 100 of the facility’s tenants are required by their leases to build-out and operate LEED Gold-certified facilities. Because the Destiny USA team works with each tenant “from the get-go” to ensure compliance, says Wallace, tenants are “excited to be part of something new…this entire shift toward green initiatives.”

Because of the way the facility is being built, says Wallace, tenants are provided 21 points toward LEED Gold certification at the outset, and only need to supply the other half of the qualification points through lighting and fixtures.

A shopping facility can qualify for LEED certification through the construction of its exterior only, says Wallace, so ensuring that the building is LEED Gold on the inside is taking an extra step. “We have gone above and beyond the traditional realms of retail development,” says Aitken, “all while remaining cognizant of environmental sustainability.”