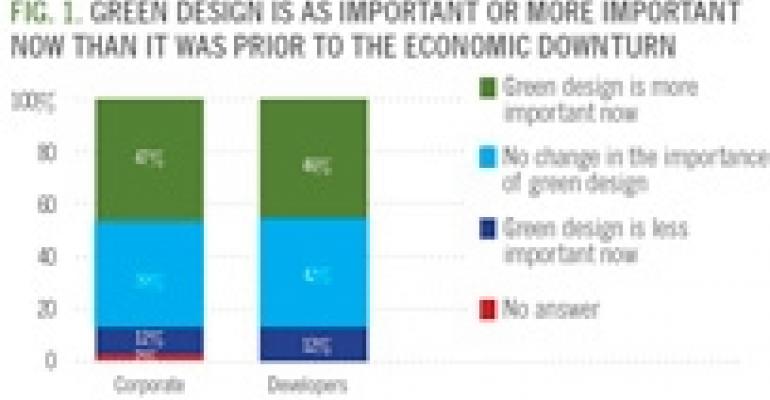 Doubling Down on Green

The past two years have been brutal for U.S. businesses and their employees. That reality has trickled down to commercial real estate owners and landlords who have been grappling with how to pay debt service on properties with rising vacancies and falling rents. Against such a bleak economic backdrop, green building has not retreated, but in fact sunk its roots even deeper into the commercial real estate industry’s psyche and practices.

“We see an increase in awareness and activity, particularly on existing buildings and retrofitting of existing buildings,” says Marc Heisterkamp, director of commercial real estate for the U.S. Green Building Council based in Washington, D.C. “It is in a tough economy that top companies rise to the occasion and find ways to save money and position their real estate for the future.”

According to an exclusive green building survey of developers, corporate real estate executives, and city and county government officials conducted by National Real Estate Investor in partnership with the U.S. Green Building Council, sustainability in commercial real estate has gained ground over the past year. An overwhelming majority of developers (88%) and corporate executives (86%) indicate that they consider green design to be as important or more important now than it was before the recession [Figure 1].

Industry data continues to reflect a surge in green building activity. A total of 1,784 buildings across major property types have earned certification through the Leadership in Energy and Environmental Design (LEED) program over the past 12 months ending in August, a 47% increase over the prior year.

“Two years ago I would have told you our LEED initiatives program was very aggressive, but today we’re focusing on the portfolio-wide green initiatives we undertake because of the economic environment,” he adds.

Government respondents also have jumped on the bandwagon to lower utility bills, with 78% indicating that they are upgrading or planning to upgrade one or more products in the next year, including HVAC, lighting or water controls in public buildings. Survey findings also show that more state and local governments (56%) would consider using performance contracts to improve energy efficiency in their facilities, up from 50% in 2008 and 45% in 2007 [Figure 3]. But the $787 billion stimulus package, otherwise known as The American Recovery and Reinvestment Act, has had little impact on the decision of jurisdictions to retrofit their facilities for greater energy efficiency. Just 34% of respondents say that the federal stimulus influenced their decision.

Respondents differ on how long it takes to recoup the costs for energy retrofits. Corporate executives and developers indicate that it takes between three and four years to recover costs, while government respondents are most likely to report it takes five years or longer to recoup costs [Figure 4].

“Anything that has a payback period of three years is a no-brainer,” according to Piccinich of SL Green. “That’s something that you should just pursue.”

Determining how to accelerate the payback period requires expertise and smart planning, according to George Gosieski, chair of the sustainability community for Atlanta-based CoreNet Global, a professional association for corporate real estate executives serving multinational companies.

Gosieski, also a partner with sustainability consultant Business EcoSystem based in Richmond, Va., maintains that through a combination of tax incentives at the federal, state and local levels and “the ability to monetize your reduction in your carbon footprint” through current and future regulations, smart corporations can turn the revenue drain of energy retrofits into revenue streams.

There are two dueling pieces of energy legislation in Congress: the Waxman-Markey energy bill, widely known as the “cap-and-trade” bill, introduced in May of this year; and the Kerry-Boxer clean energy bill, proposed at the end of September.

The 2009 Green Building Survey focused on familiarity with and attitudes toward the proposed cap-and-trade bill, which passed the U.S. House of Representatives in June and is now being debated in the U.S. Senate. Six out of 10 corporate respondents and 58% of developers indicate they are very or somewhat familiar with the cap-and-trade legislation, which would allow businesses to trade or buy carbon credits if they exceed specified limits.

While both bills are far from the president’s desk, survey respondents widely believe that the impact of federal energy regulation on commercial real estate would be largely negative. For example, 59% of developers and 44% of corporate executives say that energy legislation will translate into higher costs. In contrast, only 28% of developers and 19% of corporate respondents say that federal regulation would result in higher-quality properties.

At the end of October, the U.S. Environmental Protection Agency analyzed both pieces of energy legislation and provided this analysis: “The cap-and-trade policies outlined in these bills would transform the way the United States produces and uses energy.”

The survey shows that 45% of corporate executives and 44% of developers believe that some form of the legislation will be enacted into law. Despite pending legislation, Heisterkamp of the U.S. Green Building Council maintains that the strong market forces of tenant demand will encourage developers to go further with their sustainability efforts than the minimum required by law. In addition, a majority of developers (66%) believe that green requirements will eventually become part of required building codes, up from 56% in 2008 and 51% in 2007 [Figure 5].

Office developer SL Green has experienced rent declines of roughly 10% over the course of the downturn. The good news is that the company’s average occupancy rate portfolio-wide is 97%, a stark contrast to New York City’s office occupancy rate of 88.6% at the end of the third quarter, according to New York-based researcher Reis.

While the premium to build green depends on geographic location, materials, planning and the desired level of sustainability, developers indicate that building green adds an average of 6% to construction costs.

In 2006, when Novato, Calif.-based Fireman’s Fund Insurance Co. offered the first green building coverage with up to a 5% discount on commercial property premiums, many industry experts predicted that other carriers would quickly follow suit.

While up to 10 insurance carriers now offer green insurance policies, according to Tom McGaffic, assistant vice president with global insurance giant Marsh, these companies are charging an average premium of 5%, rather than a 5% discount.

“We haven’t seen the aggressive pricing that we had hoped for these green buildings,” he says. “There’s still some apprehension on the part of underwriters about exactly how superior these buildings truly are in that regard.” McGaffic forecasts the demand for specialized green insurance policies for new and existing buildings will remain largely dormant at least through 2010.

When asked which financial carrots were the most beneficial, nearly three in four developers and 58% of corporate respondents cite tax incentives.

“Now is certainly not the time that we can put money into [financial incentives] because we’re still on the downward trend as far as the budget goes,” says Phoenix City Councilman Claude Mattox, who also chairs the energy, environment and natural resources committee for the National League of Cities, a Washington, D.C.-based non-profit group that is an advocate for 19,000 cities, towns and villages.

What Phoenix has done to promote green building since 2005 is comply with a policy that all new city buildings be constructed to LEED standards, including the recent $600 million expansion of the Phoenix Convention Center. Its inspectors also are trained to inspect projects to the LEED standard.

What’s in a label?

By one definition, a label is just a sticker. But of course it’s what a label represents in terms of green design verification that attracts developers and corporations to certifications such as LEED, whether it’s to meet tenant demand and maximize property values, or to fulfill corporate sustainability mandates.

Some 85% of corporate executives and 76% of developers say that they are at least familiar with the U.S. Green Building Council’s LEED program. A slightly lower percentage of government officials (59%) are familiar with LEED. Overall, familiarity with LEED has risen significantly since 2007 [Figure 7].

Among corporate respondents familiar with LEED, 61% say the designation is important in the site selection process, up from 45% in 2008 and 38% in 2007 [Figure 8]. A majority of both corporate and developer respondents report that they believe LEED to be an effective system for energy savings and environmentally friendly buildings.

“I use the survey to look at the market for green building and the opinions of the players out there in terms of where green building is and where they think it’s going,” she explains. Akason’s class not only attracts students who are curious about green building, but also those who wish to incorporate the “latest thing into their knowledge and skills.”

Given the seismic shift toward sustainability and the swift adoption of green practices by the commercial real estate industry, green will eventually become common practice, Akason predicts. “Perhaps my class won’t even be necessary in the future as a specific green building class because all real estate development will be green.”