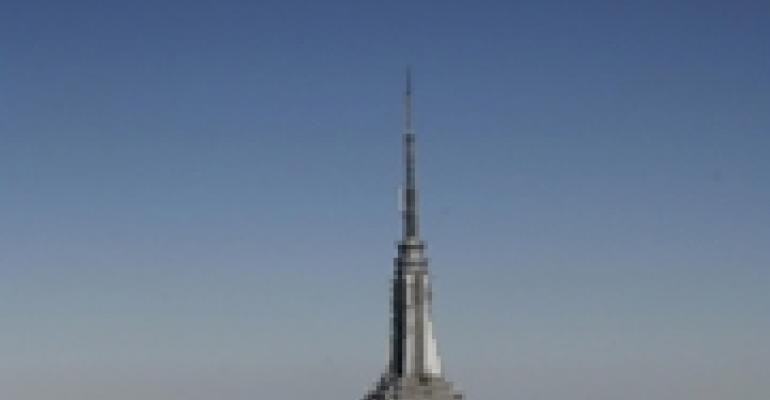 When the Empire State Building opened in Manhattan in 1931 during the Great Depression, rising an imposing 1,454 ft. above Fifth Avenue, it was the tallest building in the world, and state of the art. Over the years, the skyscraper drew visits from presidents, prime ministers, the queen of England, and film stars recovering from sleepless nights in Seattle, as the building cemented its status as an American landmark.

Through the steel veins of its pipes, water coursed for 70 miles, and 2.5 million ft. of electrical wire pulsed with 40 million kilowatt hours of electricity needed by tenants to light their offices, propel their machines and provide for the building’s energy demands. Some 50 miles of radiator pipe kept the workers warm.

But it literally cost a fortune to heat and cool the building and serve its energy needs, an estimated $16 million annually by 2008. Heat seeped away to the exterior walls in winter, while in summer, the sun toasted offices. When it came to energy consumption, the iconic building was no longer state of the art.

Now, through a $20 million project involving the Clinton Climate Initiative, a program to reduce greenhouse gas emissions, Johnson Controls, a Milwaukee-based technology firm, and other participants, the Empire State Building has cut its energy use by 38% and begun to save $4.4 million annually. Jones Lang LaSalle manages the work done by Johnson Controls and implements certain projects with other vendors.

“The ownership of this building, together with Clinton Climate Initiative and Rocky Mountain Institute, decided to take the world’s most famous office building and make it the most visible case study in sustainability,” says William Cohen, executive vice president and principal of Newmark Knight Frank, a New York-based real estate firm that handles leasing at the Empire State Building. The landmark is part of W&H Properties' office portfolio, and is supervised by Malkin Holdings LLC.

Because of the upgrades started in 2009, carbon emissions at the high-rise will drop by estimated 105,000 metric tons over 15 years, executives report. Although the work is not scheduled for completion until at least 2011, the energy savings already is substantial, says Cohen.

The $20 million energy savings project is part of a broader, $500 million renovation underway at the iconic building, explains Cohen. As part of the move toward greater efficiency, the tenant list has been consolidated and hundreds of smaller occupants were compelled to leave the skyscraper.

“The building used to be occupied at one point by as many as 850 little tenants. We made a strategic decision to purge the building of the smaller tenants, which are generally associated with a higher credit risk, and we’ve aggregated not only entire floors but also large blocs of contiguous floors. So when we’re done, there’ll be less than 200 tenants in the entire building,” says Cohen.

Current tenants include many media, advertising and law firms, as well as newcomers Coty, the New York- and Paris-based cosmetics firm, which leased 100,000 sq. ft. and plans to grow, and the Federal Deposit Insurance Corp., which recently took 100,000 sq. ft.

To appeal to trophy tenants, the landmark needed to address its energy efficiency issues, while it upgraded other systems. As part of the larger rebuilding program, the Empire State Building’s 73 elevators are being updated, for instance.

“We’ve invested the necessary funds to reduce the operating costs,” of the high-rise, says Cohen. “For the past 80 years, the building’s radiators have been wasting energy heating the outside masonry wall. So every one of the 7,000 radiators in the building has been removed, and we placed a heat shield up against the masonry wall, so that no longer will the energy be wasted heating a brick wall, but rather whatever energy is created is pushed out in the form of heat to the tenant.”

The windows also are getting an energy makeover. All 6,500 windows, which were replaced with high quality, double-paned models in the 1990s, are being retrofitted again to add a third pane, a sheath of Mylar, and insulating gas in the void, to raise energy efficiency.

“The building’s got windows on four sides,” says Cohen. So there’s nothing to block the interior from the sun. “We take a heavy heat load.” Further insulating the windows and adding the third pane counteracts the sun’s heat. “So right there we made a huge impact. We’ve eliminated the heat load through the windows,” notes Cohen.

Attacking the cost of light

One of the skyscraper’s biggest expenses is lighting. A new design calls for better use of the naturally lighted central core. “With windows on four sides, there’s a lot of natural daylight. Nobody’s ever far from light,” says Cohen.

Newly installed fixtures use “daylighting” control, meaning that they brighten and dim with outside conditions. “If you go up on most of the new floors, during the day if the lights are on, they’re on dim because they’re just not needed. They come on as necessary,” says Cohen. Motion detectors trigger the lighting. “When the elevator opens and someone walks off, the lights go on,” he adds.

Other aspects of the sustainability initiative include recycling 95% of tenants’ cartable waste, and 60% of tenants’ construction debris. The building uses “green” cleaning products and pesticides, and recycled paper goods.

Visitors to the Art Deco structure will find many changes, including a lobby restored to its original condition after a $15 million investment, says Cohen. “I understand there’s something like $11 million in 23-carat gold and aluminum leaf on the ceiling alone.”

What does the makeover mean for the landmark’s 3.8 million annual visitors and for other commercial real estate trophies that may be showing their age?

“What we’re showing is that an 80-year-old office building can operate more efficiently than a building less than 10 years old,” asserts Cohen.

Architects and developers of 10-year-old structures, however, may believe that 10 is a more appealing age than 80. But Cohen doesn’t budge. “I don’t necessarily agree with that.”