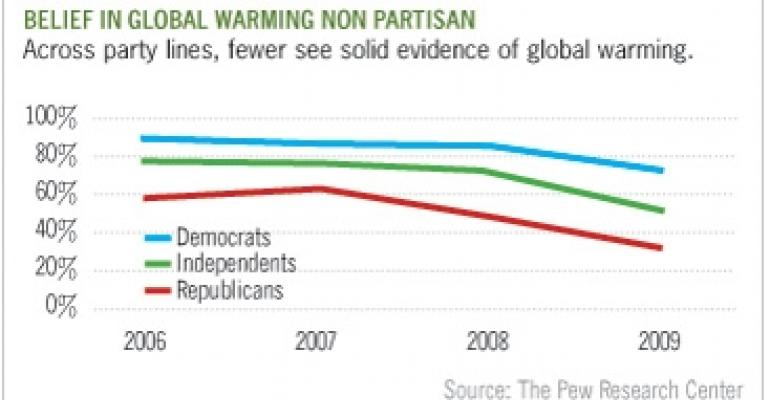 American’s belief in global warming and its human causes has begun is waning. That’s the conclusion of the latest national survey by the Pew Research Center for the People & the Press, which revealed that just 57% of respondents today say there is solid evidence of rising global temperatures compared with 71% who held that same belief in April 2008.

Over the same period, there has been a comparable decline in the proportion of Americans who say global temperatures are rising as a result of human activity, such as burning fossil fuels. Just 36% say that currently, down from 47% last year.

Fewer than four-in-ten (36%) now say global warming is mostly caused by human activity such as burning fossil fuels, while 16% say it is occurring mostly because of natural environmental patterns.

The survey was conducted Sept. 30 through Oct. 4 and included 1,500 adults reached on cell phones and landlines.

And while the GOP recently made headlines by boycotting a U.S. Senate hearing to begin marketing up the Democrat-sponsored Kerry-Boxer climate bill, across the political spectrum fewer Americans are convinced that solid evidence of global warming exists.

The trend was most prevalent among independents, of which only 53% now see solid evidence of global warming, compared with 75% in April 2008. Republicans, who were already highly skeptical of the evidence of global warming, according to the Pew study, have become even more so. Just 35% of Republicans now see solid evidence of rising global temperatures, down from 49% in 2008 and 62% in 2007. Democrats have also backed off in their belief to 75% today, down from 83% last year.

There are two dueling pieces of energy legislation in Congress: the Waxman-Markey energy bill, widely known as the “cap-and-trade” bill, introduced in May of this year; and the Kerry-Boxer clean energy bill, proposed at the end of September. Cap-and-trade would allow businesses to trade or buy carbon credits if they exceed specified limits.

However, a third option, announced last week by Senators John Kerry, Joe Lieberman and Lindsey Graham, seeks to find middle ground in legislation that could pass the Senate with 60 votes. While this bill would still encompass a cap-and-trade program, it would also include some measures important to Republicans such as strengthening nuclear power in America.

With the Health Care Reform slowing winding its way through Congress, however, experts now say the prospects of passage for any major energy legislation this year are dim.