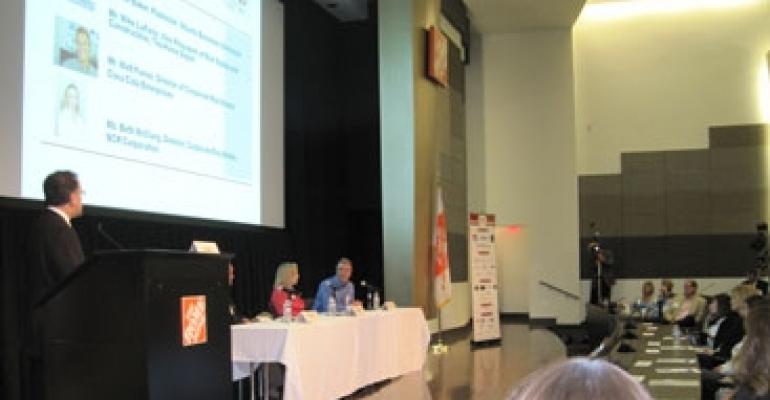 The corporate real estate divisions of a growing number of Fortune 500 companies are aggressively pursuing energy-conservation measures, from relocating warehouses in order to save fuel costs to applying Japanese ideas to the design and operation of manufacturing plants.

From The Home Depot, which operates 2,245 retail stores occupying 235 million sq. ft. and owns 89% of the real estate it uses, to Coca Cola Enterprises, which owns 70% of the 43 million sq. ft. it occupies in North America and Europe, the companies’ commitment to green measures has a substantial impact on them and the communities in which their facilities are located. Both firms are headquartered in Atlanta.

At a newly opened, 350,000 sq. ft. industrial plant in Columbus, Ga. where it manufactures automated teller machines, Duluth, Ga.-based NCR Corp. applies Japanese “lean” techniques to cut costs and energy use, from construction to operations. Lean manufacturing involves eliminating waste and streamlining processes. The company recycled cinder blocks and carpet at the facility, and is seeking LEED certification following a retrofit of the building.

Converting the plant to a more energy-efficient facility is a challenge, but the company has made a commitment to green measures, says Beth McClurg, director of corporate real estate at NCR. “It is taking extra cost to do that, which may not have immediate payback in terms of our financials, but because of the importance, we’re proceeding and hope to have LEED certification soon.”

NCR, which recently relocated its headquarters to the Atlanta area from Dayton, Ohio, uses upgraded lighting and streamlines such tasks as office trash removal. “In many of our facilities, we don’t pick up the trash at employee workstations five days a week. We do it two or three days a week,” she says. It saves money. “Our employees learn that if they’re going to eat lunch at their desks or have any food products, they need to empty their trash themselves.”

The Home Depot, based in Atlanta, is taking aggressive steps to conserve energy, says Mike LaFerle, vice president of real estate. “We’re reclaiming water off our rooftops to serve our garden centers, which use a tremendous amount of water, especially in the Sunbelt,” he says.

“It’s all about energy conservation and the carbon footprint. Being a retailer, it’s also about cost and value.” However, although Home Depot has six LEED-certified stores, certification by the U.S. Green Building Council is not always in the best interest of the company, says LaFerle. “For example, you get credits for putting bike racks and showers in your stores. Yet, if your store is located in an interchange outside the city, it’s not really relevant to have bike racks and showers at that store. They’re probably not going to be used.”

Overall, the company is on track with the idea of making buildings more environmentally friendly, he says. However, “LEED is a little bit of a challenge for us to make financial sense, and just operational sense for the stores.”

Since 2004, Home Depot has cut energy use by 16% or about 2.6 billion kilowatt hours, by changing lighting sources in its retail stores.

The company also uses energy management systems that allow lighting and temperature to be controlled remotely from Atlanta, so that lights can be turned off during hours when the store is closed. In Canada, during peak times of energy use, store lights are turned down to about 30% of capacity, and skylights in the Canadian stores provide natural light.

“Going forward, we have made a commitment to reduce our kilowatt hours per store by 20% over the next five years, which will be a huge savings,” says LaFerle.

Coca Cola Enterprises is turning its attention to alternative energy production such as solar and fuel cell technologies, says Matt Fanoe, director of corporate real estate at Coke. “We just did a solar roof down in Macon, and we’ve done quite a lot for California and Arizona.” Fanoe spoke at a panel sponsored by the group Commercial Real Estate Women (CREW) in Atlanta. McClurg and LaFerle also participated.

The company built a major recycling plant in South Carolina about two years ago, and has retrofitted about 26 plants over the past two years. “I think there’s a real recognition at the very senior levels of Coke of how much of an impact we do have,” in energy use and conservation, says Fanoe. Alternative energy and green programs also help the company retain younger employees, he says.

But the programs have to make economic sense, he cautions. “We can pretend that cost is not number one. But it’s still number one.”