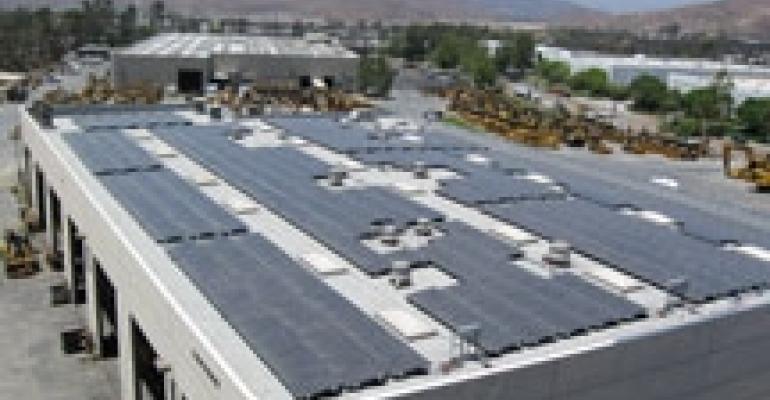 Across the nation, green development has suffered from the credit crunch along with conventional commercial real estate projects, according to attorney Mary Anne Sullivan, partner in the Washington, D.C. office of law firm Hogan & Hartson. Earlier this year, one of her clients arranged financing with Lehman Brothers for a renewable energy project only to have the loan fall through a month before closing when the lender went bankrupt.

“I’ve seen among my own clients the funding for several projects disappear very close to an anticipated financial closing date because of the economic crisis,” says Sullivan, who is a co-chair of her firm’s climate and clean energy working group. “It’s clearly having an impact on the ability to fund projects.”

As recently as early November, lenders were still shocked into a state of immobility by the credit crisis and weren’t interested in discussing new loan applications, according to Ezra Green, chairman & CEO of Clear Skies Solar, a Long Island, N.Y.-based designer and installer of solar photovoltaic systems. “You couldn’t get them to answer the phone,” Green says.

Yet Green believes the high cost of capital that has accompanied the credit crunch will ease in 2009. He says the Federal Reserve’s dual half-point rate cuts, which pushed the overnight Fed funds rate down from 2% to 1% in October, are helping to control borrowing rates.

Anecdotally, Green says some of his developer clients and their lenders have resumed efforts to arrange funding for sustainable projects. “The lenders are coming back to the table, getting their pens and paperwork back on their desks,” he says. “So the money is starting to loosen up.”

A surprising impediment to sustainable projects that has arisen this fall is plummeting fuel costs. When the cost of conventional fuels and energy falls, it makes power from wind, solar and other renewable sources seem more expensive by comparison. Deflating gasoline prices have taken some of the wind from the sails driving the renewable energy industry, and there is some concern that falling fuel costs will erode interest in green building as well.

The cost of heating oil, for example, averaged $2 per gallon in November, down 25% from a year ago, according to the Department of Energy. A corporation that made plans to install an energy-efficient climate control system in its headquarters this year may have expected to recoup its renovation costs from energy savings in, say, five years. If energy costs have come down, however, that may add a year or two to the time it takes for the payback from utility savings to recover the expense of the initial upgrade to the mechanical system.

A few extra years added to the payback period on a green building investment isn’t going to deter many tenants or landlords from proceeding with planned improvements, Sullivan says. Why? Because green building projects are usually motivated by a desire to reduce a company’s carbon footprint, conserve resources, or meet a specific goal for certification rather than purely to save money on utilities.

By the same token, power-generation projects like wind farms are driven by demand that is largely unrelated to the cost of conventional energy. Much of the demand for alternative energy projects comes from utility providers who want to meet government mandates for providing renewable energy, Sullivan says. “The demand is independent of the cost of fuel for the most part.”

As late as this summer, the greatest threat to green building seemed to be the looming Dec. 31 expiration date for federal tax credits that have helped to encourage investments in renewable energy. Then in October, lawmakers seemed to knock down that barrier to the industry when they approved tax credit extensions valued at $18 billion.

Unfortunately for promoters of sustainable design, the recession may thwart the government’s intention of using tax credits to boost sustainability efforts. That’s because tax credits only reduce a company’s tax burden, and therefore offer little incentive for firms that expect flat incomes or even net losses in 2009.

“It really is ironic,” Sullivan observes. “Right after that tax credit they had fought so long and hard for got approved, the economic situation upon which the tax credit was premised turned upside down, so the tax credit can’t function as intended.”

To promote green investments in a changing economic landscape, Sullivan says, some of the same organizations that lobbied for tax credit extensions are expected to push for a conversion of those tax credit provisions into a tax refund program.

Even with the recession, tax credit renewal was a victory for renewable energy, according to Green of Clear Skies Solar. Tax credits and other government incentives help mitigate the cost of green projects and shorten the time it takes to recoup costs through savings in energy bills. Thanks to tax credits and state incentives, an onsite solar power generation system in New Jersey can pay for itself in as little as four years, he says. Incentives vary by state, so the same system could take as long as nine years to cover its own cost in some states.

Tax credits, in part, make photovoltaic panels a worthwhile investment for landlords, and even for tenants who plan to occupy their space for more than 10 years, he says. Most solar power systems will continue to generate electricity for 30 years or more, reducing the need for purchased power throughout that time. “It’s always going to be a great investment,” he says. “You’re going to make a small fortune over the course of that term.”

Clear Skies continues to install solar power systems for clients that are able to undertake projects using little or no leverage. That includes a 159 kilowatt photovoltaic setup the company installed this year at the Rancho Bernardino, Calif. headquarters of Hawthorne Machinery, a heavy equipment dealer. Federal tax credits and a state-level incentive are helping to bring Hawthorne’s cost down to about 20% of the project’s $1.28 million price tag.

Glimmer on the horizon

Margaret Montgomery, a principal in the Seattle office of global architecture firm NBBJ, sees opportunities as well as challenges for sustainable design going into 2009. For one, she is encouraged by the Obama administration’s commitment to reduce carbon emissions. “And we can expect focus on clean energy and conservation -- both very positive steps for the green building industry,” she says.

There is even an opportunity for the Treasury to promote sustainability as part of future economic stimulus measures, Montgomery says. That could take the form of funding for high-efficiency energy infrastructure and building-efficiency improvements, which would serve the dual purpose of increasing spending by businesses and consumers while potentially slowing the consumption of natural resources.

The falling cost of oil isn’t a long-term serious setback for renewable energy sources, Montgomery says, and if anything will only bring a temporary reduction in the relative savings that commercial landlords can expect from green investments. “Energy prices will rise again,” she says, adding that when prices do climb, the advantage of using the most efficient heating, ventilation and air conditioning systems available will become apparent.

And although the credit crunch has increased the difficulty of financing nearly all projects -- green or not -- the slow economy may kindle interest in sustainability among a wider range of businesses that will be searching for new ways to control expenses, Montgomery says. The potential for legal restrictions on carbon output will only add to that interest.

“We believe that this is a sea change in how we deliver value,” Montgomery says. “When the economic crisis is over it won’t be back to business as usual but will be a new game altogether, where green buildings, smart urban design and lower carbon planning will be requirements, not options.”