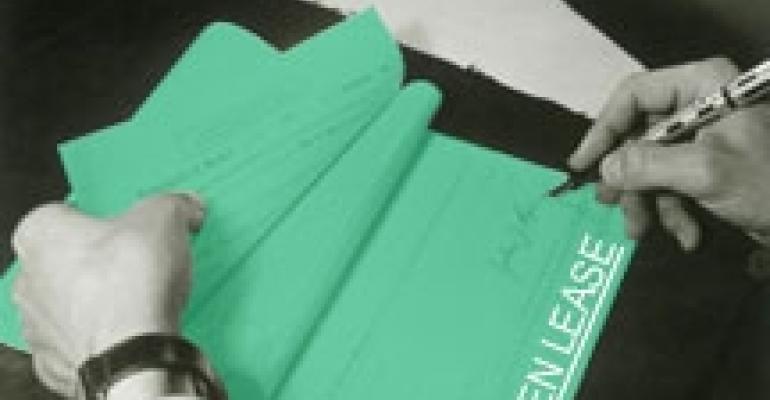 Green Leases: A Matter for Debate

As companies stake their branding and corporate reputations on sustainability, office landlords and their tenants are exploring ways to hold one another accountable for green practices through lease provisions.

While few leases in green buildings directly address carbon footprints or sustainable practices today, leasing experts say green leases will become common in the next few years. That will give tenants leverage to compel landlords to maintain energy efficient practices in their space and prevent future maintenance and repairs from degrading the sustainable features of a property. A green lease could require that a broken toilet, for example, be replaced with the latest low-flow model rather than a conventional fixture.

Green leases are a two-way street, however, and offer landlords a boost in maintaining green operations. If the U.S. Green Building Council requires buildings that have already achieved Leadership in Energy and Environmental Design (LEED) designations to renew those ratings — which is expected to happen in the coming years — then a building owner may rely on lease provisions to ensure that a tenant’s operations won’t thwart the building’s performance.

In fact, leasing provisions may help a property owner to meet LEED standards for existing buildings by enlisting tenants to make some of the necessary improvements. Renovating a building to comply with LEED EB, or LEED for existing buildings, can also translate into improved marketability and higher rents, according to Mark Pillsbury, an attorney and tenant representation specialist in the downtown Houston office of CB Richard Ellis.

“On the bright side for owners, it’s a great opportunity for improved performance and repositioning of a building,” Pillsbury says. “Re-branding is hard to do, and this is a great way to do it. You can buy an older building, retrofit it and make it a LEED EB building.”

What’s in a green lease? The Pennsylvania Governor’s Green Government Council drafted sample provisions and posted them online here: Model Green Office Leasing Specifications. Line items range from suggested mechanical systems and water fixtures to janitorial services, each providing a goal for sustainability and requirements for both the landlord and tenant to meet that objective.

One provision, for example, requires at least 75% of waste generated by interior construction to be redirected away from landfills. A landlord who doesn’t agree to that point must provide a written explanation, with evidence to substantiate those reasons, in order to comply with the lease agreement.

Rather than draft an entire set of environmentally friendly lease provisions, some tenants simply embrace industry standards as an attachment to a conventional lease. In a recent office lease in Houston, for example, CBRE helped a major energy company to include a LEED checklist for new construction as part of its lease.

“That can be included in the lease as an exhibit just as you would include an exhibit for how a building will be cleaned every night,” says Pillsbury, who serves on the executive committee of CBRE’s national sustainability practices group.

The difficulty of imposing green practices through lease documents will vary greatly depending on the number of tenants at the site, says Marisa Manley, president of New York-based Commercial Tenant Real Estate Representation. For example, a suburban office building with only two tenants may be an easy place to submeter utilities, which enables occupants to benefit from energy savings brought about by green practices.

On the other hand, submetering may be out of the question for a downtown building with 10 tenants per floor. “The ability to offer directly metered electricity and allow a tenant to benefit from energy savings and bear that cost directly is certainly a consideration,” Manley says.

If some tenants are interested in sustainability and others are not, the landlord may have a hard time introducing energy conservation measures into leases as they renew. Will tenants agree that any changes they make to their space over the course of the lease meet LEED requirements for construction?

“You may find tenants aren’t willing to sign onto that,” Manley says. Likewise, tenants may not agree if the landlord attempts to schedule janitorial work during normal office hours in order to reduce electric consumption afterhours. Clearly, landlords and tenants are treading new territory in negotiating green leases and it will require some experimentation before uniform standards emerge for the industry.

Whatever terms a company and its landlord decide upon, however, need to be included in the lease, along with means for both parties to enforce those provisions, says Pillsbury, the CBRE senior associate. “You can put anything into a lease,” he says. “The key is a remedy for nonperformance.”