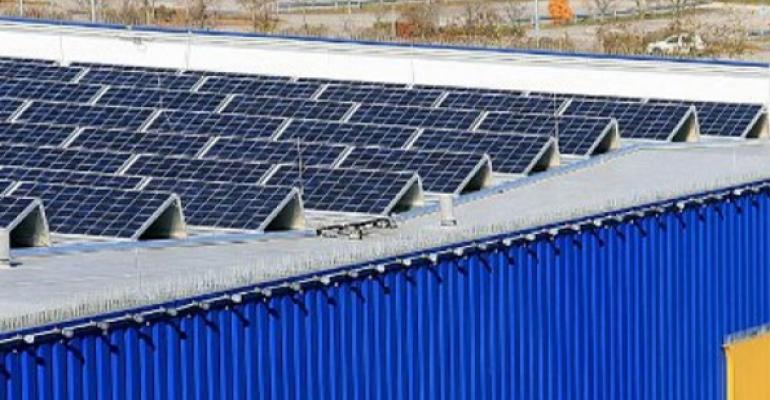 IKEA is pursuing a massive clean-energy program with the installation of solar panels on at least 20 of its 44 U.S. locations. In addition to slashing its need for power generated by fossil-fuel-fired power plants, the home furnishings retailer expects to reduce its long-term operating costs with lower utility bills.

“About a year ago, IKEA made the decision to begin evaluating every location around the world for sustainability,” says Joseph Roth, the company’s national director of public affairs. “We looked not just at stores, but at offices, distribution centers and vacant pieces of land to see what was feasible.”

In years past, IKEA has leased rooftop space to third parties for solar panel installation. Privately held IKEA has more than 320 stores in 38 countries, including 37 in the U.S.

The company began experimenting with purchasing and installing a system of its own last summer at an IKEA store in Tempe, Ariz. The success of that prototype convinced the retailer that similar systems at some of its other locations would be a good investment, according to Roth.

“It became clearer and clearer to us that it was a much more straightforward process and technology than it used to be,” Roth says of the Tempe installation. “And it was more financially feasible as well.”

Photovoltaic cells emit electricity when exposed to sunlight, a technology originated in the 1940s and 1950s to power satellites. Gradual improvements boosted the efficiency direct current (DC) produced by solar panels, but the industry has made great advances in the past 20 years with inverters that convert DC power to usable alternating current.

The owner of a large, commercial installation typically feeds power generated by solar panels directly into the local electrical grid. Arrangements vary by state and municipality, but the utility provider can pay the property owner for electricity produced on the site, deduct the amount of power contributed to the grid from the property owner’s billable consumption, or both. State or federal rebates can also come into the calculation, accelerating the property owner’s savings and ultimate return on investment.

While IKEA doesn’t disclose financial cost or benefit details about its solar initiative, the systems do pay for themselves over time. “We wouldn’t be doing it if we weren’t confident of financial success as well as sustainability,” he says. “It made good business sense and good sustainable sense to take this initiative.”

To continue reading, go to NREIOnline.com.