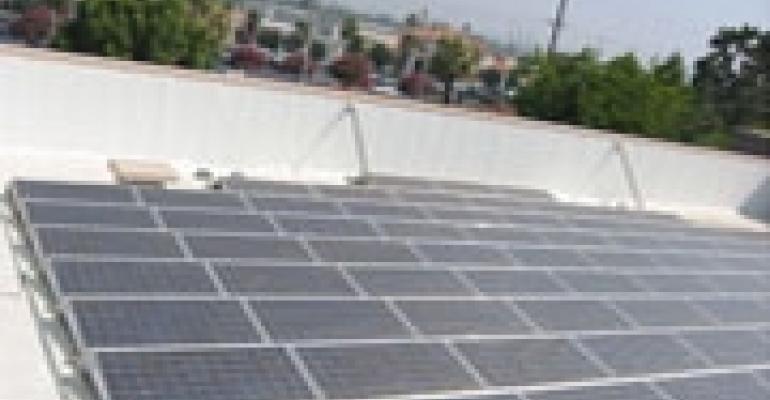 High energy prices this summer are turning up the heat on research and development to make solar power generation more effective and affordable. For commercial property owners, that means options are increasing to supplement electricity use with on-site photovoltaic systems.

This year, Long Island-based Clear Skies Solar introduced TetraPort, a solar-paneled carport system. Available in varying sizes, the basic TetraPort unit spans 40 linear feet of parking spaces and generates as much as 65,000 kilowatt hours per year depending on location, according to Ezra Green, CEO at Clear Skies Solar. The system enables property owners to maintain their own architectural style while providing independent AC power outlets for electric or hybrid automobiles. “It can certainly charge a number of vehicles at one time,” he says.

June alone was a busy month for solar technology innovators. On June 16, Intel Corp. announced it is spinning off part of its New Business Initiatives group to form SpectraWatt Inc., which will manufacture solar cells. In announcing the spinoff, executives at Santa Clara, Calif.-based Intel stated that SpectraWatt will focus its development efforts on improving existing manufacturing methods and capabilities to reduce the cost of solar cells, which are used to build solar panels.

Intel Capital is leading a $50 million investment round in SpectraWatt. Cogentrix Energy LLC, a wholly owned subsidiary of The Goldman Sachs Group, along with PCG Clean Energy and Technology Fund and Solon AG are joining Intel Capital in the funding round.

Intel isn’t the only technology giant pushing solar innovation. The same day Intel announced the SpectraWatt spinoff, IBM announced a partnership with Japanese solar component manufacturer Tokyo Ohka Kogyo Co. to develop low-cost solar energy products. The partnering companies plan to create thin film solar cell modules known as Copper-Indium-Gallium-Selenide (CIGS). Because CIGS cells can be 100 times thinner than their silicone-wafer counterparts and can be cast on inexpensive glass, materials costs are lower for CIGS. Researchers believe CIGS could be arranged on a flexible backing suitable for application to the tops, sides and even tinted windows of commercial buildings.

Also in June, Palo Alto, Calif.-based HP announced an agreement that could lead to the development of solar energy systems that generate twice the power of traditional solar panels at half the cost. The licensing agreement will enable Livermore, Calif.-based solar products developer Xtreme Energetics to use transparent transistor technology that HP developed with Oregon State University.

Xtreme Energetics’ flat solar system eliminates the need for mechanical tracking of the sun as it traverses the sky. When combined with HP’s transparent electronics technology, the system can be artistically patterned to mimic the appearance of a building material or terrain for aesthetic appeal, according to developers. “Blending art and science, our ultra-high efficiency solar energy systems can serve both the central utility and rooftop markets using low-cost, ecologically harmonious and architecturally inspiring designs,” says Colin Williams, CEO of Xtreme Energetics.

Clear Skies Solar is a good example of a service provider that has branched into product development. Most of company’s business comes from large-scale panel installations, such as a $1.7 million project to install 15,000 sq. ft. of solar panels this summer at Scott Brothers Dairy Farms in Riverside County, Calif. When completed, the dairy farm will generate approximately 240 kilowatts of power from its new panels to offset utility costs and reduce its carbon footprint.

Yet Clear Skies is clearly a product developer as well. The company recently unveiled XTRAX, a solar monitoring system that tracks power generation of less than 100 kilowatts for both residential and commercial customers. Another Clear Skies Solar product that has yet to be released commercially is a solar power supply developed for a vehicle-data monitoring company. The unit recharges delicate electronic instruments installed on vehicles tracked by vehicle fleet owners, such as car dealerships.

The company recently hired technology pros Dennis Wingo and Kenneth Kledzik to lead its development team. Wingo, who has worked for many years in the aerospace and technology fields on projects such as solar system outposts and high-level defense industry programs, will be Clear Skies Solar’s new chief technology officer. Kledzik, a seasoned computer industry professional, will become vice president of tech operations.

The science behind today’s photovoltaic hardware was originally developed to power satellites 1940s and 1950s. Gradual improvements have boosted the efficiency of DC current produced by solar panels, but the real technology gains in the sector have been changes to the inverters that convert that power from DC to usable AC electricity. “Inverters have improved by leaps and bounds, from about 60% efficiency to 90% efficiency, over the past 20 to 25 years,” Green says.

Innovation has accelerated with the increased flow of investment capital to the solar energy sector. Today, the end-user market for solar technology is approximately $30 billion, up 50% from 2006, according to Photon Consulting. “In the past two years we’ve seen a real push in Wall Street money into this sector, which is a direct result of higher priced oil and electricity,” Green says.

Demand for solar products and improvements to existing technology is increasing globally, Smith says. Not surprisingly, Clear Skies Solar is expanding with new offices in Greece, Italy, Spain and India. “Energy prices there are higher and rebates are much more generous than in the United States,” says Green.

That marks a contrast with United States, where the federal government has scaled back on solar power programs. The government has halted new solar energy projects on federal lands in Western states while it studies their environmental impact, and commercial tax deductions for energy efficiency improvements on commercial buildings are slated to expire at the end of this year.