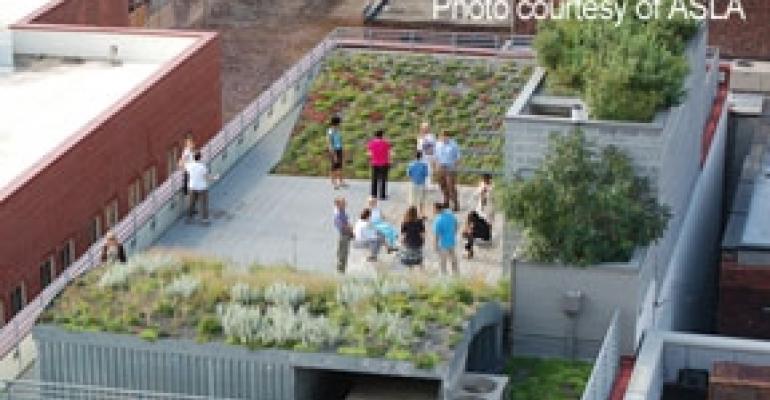 Green building is often touted as a winning strategy for commercial property owners, but insurance experts are learning it is fraught with risks to owners and their service providers.

Underwriters of casualty liability policies worry that the widespread use of new and untested products, materials, and processes in sustainable construction could cause a spike in the number of product liability claims. The risks are compounded by a lack of contractors qualified to install these products and systems, which could result in faulty workmanship and construction-defect claims.

Those were just a few of the findings presented in “The Green Built Environment in the United States: The State of the Insurance Marketplace,” a recent report by insurance giant Marsh. The report’s authors found that a few insurers are tweaking their policies and developing new products to better accommodate green building. Many providers, however, are staying on the sidelines as they determine the extent and types of exposures arising from sustainable design.

“Understanding how the risks emanating from green building differ from those emanating from traditional buildings is very important,” says Catha Pavloff, a senior vice president in the construction practice at Marsh. Pavloff leads the company’s green-building risk management initiative and worked with risk-management professionals around the nation to help produce Marsh’s report.

Landlords who ignore the unique risks that arise from green building may be opening themselves up to a variety of liabilities or gaps in insurance coverage, according to real estate attorney Paul D’Arelli, a shareholder in the Fort Lauderdale law office of Greenberg Traurig LLP.

“If you purchased a green building and didn’t give any thought to your property insurance, I would certainly revisit it and look at some of these issues,” says D’Arelli, who is working with Marsh to identify ways to improve insurance offerings for sustainable properties.

Counting costs
How can conventional property insurance be insufficient for a policyholder? Suppose that a fire destroys an office building that had achieved a LEED gold certification under the U.S. Green Building Council’s Leadership in Energy and Environmental Design program. The owner might expect the property insurance on the building to not only pay for replacing the asset, but also to pay consulting fees and other expenses associated with reapplying for LEED gold certification.

“You have soft costs you might not have in a non-LEED-certified building,” D’Arelli says.

What’s more, because the Green Building Council periodically raises the bar in its criteria, a property that had earned LEED gold a few years ago might need to significantly increase the number of sustainable features in its design to re-qualify for that same gold level certification after reconstruction. Standard property insurance may be inadequate to cover the extensive cost of such claims, D’Arelli says.

It’s critical to establish accurate property values when obtaining a property policy, Pavloff says, or the policyholder may receive insufficient coverage or wind up paying too much in premiums. Assessing value can be difficult because sustainable projects frequently involve new materials and technologies. Owners should also make sure the policy provides enough coverage to meet the owner’s goals for repair or replacement in the event of a loss, allowing for the longer construction times necessary to complete a green project, she says.

Marsh looked beyond property policies to assess insurers’ treatment of design firm professional liability, pollution liability, construction insurance, surety bonds, and casualty coverage. Researchers found that insurers’ worries over green building and the manner in which they adapt their products vary by type of coverage.

Those that insure builders, for example, voiced concern over project delays while procuring special equipment or waiting for ventilation systems to clear after construction. Surety bond providers worry about the risk of inadvertently guaranteeing performance for energy usage, water consumption, or LEED certification.

LEED and liability
There is the potential for LEED submittals — forms submitted to the Green Building Council to verify completion of steps toward LEED certification — to be deemed performance guarantees by the architect or engineer who signs the forms. That presents a problem for members of the design team — and for their clients — because professional liability insurance typically excludes coverage of a claim when the policyholder has failed to deliver a guaranteed result.

For example, suppose an engineer signs a LEED submittal confirming that the heating and cooling system selected for a project meets criteria for ozone control. If testing at some later point reveals that the system produces too much ozone, the owner could demand that it be replaced, and the engineer would then likely file a professional liability insurance claim to cover that cost. The engineer’s insurer could reject the claim because professional liability policies carry exclusions for breach of warranty.

The question of whether a LEED submittal constitutes a warranty hasn’t been tested in the courts, but at least one insurance company isn’t waiting to find out. XL Design Professional Insurance Co. advises clients to add contract language in which the owner must acknowledge that LEED verification documents submitted to the Green Building Council are based on professional opinion, are solely for the purpose of asserting LEED compliance and do not constitute performance guarantees. “It’s as simple as putting that in your contract,” says Gary Kingery, a Chicago-based underwriter for XL Design Professional Insurance.

Similarly, architects and engineers risk coverage exclusions if they guarantee to a developer that a project will achieve a certain level of energy savings or green certification, according to Frank Musica, senior risk management attorney at insurance underwriting manager Victor O. Schinnerer & Co. in Chevy Chase, Md.

Rather than risk a warranty exclusion that would limit the architect’s ability to correct problems down the road, Musica says a savvy developer won’t demand a guarantee but will instead make its performance goals clear to the design team and then let those professionals do their jobs. “Look at it as an interactive process.”

Hard lessons
Musica has collected examples of insurance claims that illustrate how well-intended efforts at green building can result in costly damages. In one case, cork flooring installed at an office building collected moisture in a kitchen and sprouted mold, requiring removal and replacement with linoleum.

In another instance, windows at a new university library that were intended to usher in fresh air instead brought in air contaminated by pigeon droppings that accumulated under a solar shade on the roof. Students reported respiratory illness when using the library.

Other insurance claims have included water damage due to an improperly engineered vegetated roof; project delays while waiting for a green product from a new manufacturer; and even a claim that an architect violated a security-conscious client’s confidentiality by detailing plans of the client’s green building in an awards competition.

Green building will create more challenges for insurers — as well as claims and lawsuits — in the coming years as more and more government bodies legislate sustainable construction standards, according to attorney Ujjval Vyas, principal at Chicago-based sustainability consultancy Alberti Group.

Last month, San Francisco adopted an ordinance that will require new construction and renovations of large properties to meet various levels of LEED certification. In a separate move, the California Building Standards Commission adopted green elements to the state’s building code, including efficiency requirements for plumbing fixtures and a goal to reduce landscape water usage by 50%.

If a local ordinance requires any major building renovation to meet or exceed requirements for a LEED silver certification, for example, property owners in that area should examine their existing insurance policies to ensure adequate coverage in case they need to rebuild following a property loss. As Vyas sees it, “developers are going to have to deal with some very strange legislative environments.”