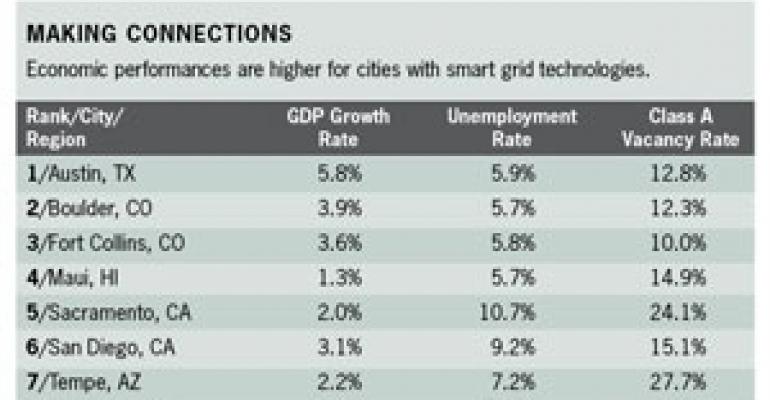 When comparing smart grid cities with North American averages, Jones Lang LaSalle researchers found that connected cities have an annual GDP growth rate that is 0.7 percent higher, an unemployment rate that is a full percentage point lower and office occupancy rates that are 2.5 percent higher than less advanced cities.

What makes a city smart?

A smart grid is a power delivery system that uses advanced information technology to improve the effectiveness and sustainability of energy production and distribution. Integrated facilities management systems that enable real-time energy-use monitoring make it possible for companies to manage proactively their use of the public grid, achieving cost savings and carbon footprint reduction by optimizing the power drawn off the smart grid.

Although Beaudoin notes that “it was noticeable that the largest cities didn’t have a presence”—including, for instance, New York, Los Angeles and Chicago—“because, in part, they have their own fiscal challenges right now that limit investment in new energy and technologies.” He says second-tier cities like Austin, Texas and Boulder, Colo. are more likely to have the capacity to invest in smart grid technology right now.

But Beaudoin says he “wasn’t terribly surprised but was very encouraged” by the data. He explains, “The broader picture for commercial real estate now is that there are almost two economies: There is the average U.S. city and there is the technology market, which is booming. A lot of cities are struggling with vacancies and employment rates; however, in places like Silicon Valley, Boston and Austin, Texas, things are booming and it’s almost like 2006.”

Overall, says Dan Probst, JLL’s chairman of energy and sustainability services, the commercial real estate industry is starting to embrace the idea of smart cities. He says that companies are now considering prospective city locations in terms of “the environmental performance of that city and how progressive the city is with things like smart grid and technology” in addition to traditional criteria like labor demographics. “Companies want to do business in cities that are consistent with their own goals for things like environmental sustainability and energy performance and advanced technologies, so, to me, those certainly contribute to why cities that are making those investments are seeing the benefit of that,” he says.

According to the recent Corporate Real Estate 2020 report, CoreNet Global experts predict that by the year 2020, buildings will be contributors to the grid, not just consumers of energy—but this will require both smart grid infrastructure and efficiently managed corporate facilities. “Newer buildings and buildings that have made an investment in alternative energy technologies will be the first ones that are in a position to put energy back onto the grid,” says Probst.

“The smart grid is great but it doesn’t do any good unless if you just have a bunch of dumb buildings,” he adds. “You can’t reap the benefits of the smart grid until you’ve made investments in the building technology itself to connect up to the smart grid and have that two-way communication. You can’t have a smart and sustainable city unless you have smart and sustainable buildings within it. The investment has to happen at the government level, the city level, the utility level, the building owner level, down to the individual level.”