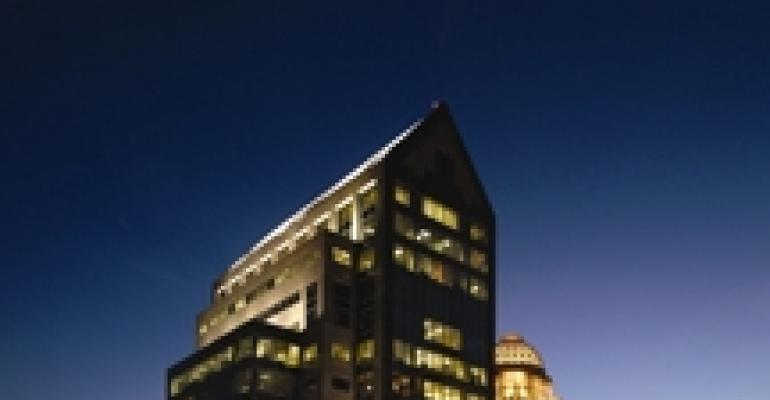 Two prominent towers in the nation’s Heartland, both built in the 1980s, are demonstrating that office buildings need not be new to be energy efficient, stellar performers. The buildings are located in Louisville, Ky., and Minneapolis.

“This award is a reflection of our company’s commitment to the environment. We see Louisville as tomorrow’s center for sustainability and a paradigm for growing cities across the nation.” says Robert Friedman, president of Harbor Group Management Co., managing agent for the building.

Built in 1989, the 288, 000 sq. ft. office building is one of Louisville’s most prominent structures. It affords dramatic views of Louisville and the Ohio River. The building proves a “highly efficient” floor plate and enhanced natural lighting in tenant spaces, according to a listing on LoopNet, where 17,219 sq. ft. of space was advertised in April for $16.50 per sq. ft. annually.

Owned by an affiliate of Harbor Group International LLC, the LG&E building is approximately 93% occupied with spaces still available from 1,300 to 8,600 sq. ft.

The building received its first Energy Star label in 2007 and has continued to make energy conserving upgrades over the years. It uses 35% less energy and generates 35% fewer greenhouse gas emissions than comparably-sized non-energy efficient office properties, according to Harbor Group, a diversified property management company.

The tower is located at 220 Main Street. The award was presented recently by the Louisville Energy Alliance in coordination with Energy Star. Local chapters of national commercial real estate organizations sponsored the presentation, including the Building Owners and Managers Association, the Institute of Real Estate Management and the Certified Commercial Investment Member (CCIM) Institute, as well as the Louisville Energy Alliance and Louisville Jefferson County.

Staying dry in Minneapolis
In Minneapolis, where the annual snowfall reaches 50 inches, and the phenomenon of “thundersnow” is not a rare event, buildings need to protect occupants during chilly winters and hot summers.

NorthMarq, which manages the 42-story Campbell Mithun Tower, built in 1985, is focusing not just on heating and cooling, but also on water usage, says Kevin Connolly, NorthMarq’s general manager of the tower.

NorthMarq also continues its recycling and programs to monitor and reduce environmentally harmful products. The recycling rate at the tower has risen to more than 50%.

“The building continues to be efficient in its electricity, steam and chilled utility cost reductions, savings that were achieved prior to the LEED process and that far exceeded the requirements. It also has seen a continuing decline in water consumption and expenditures.“In fact, the building has realized water consumption savings of 50%,” says Connolly.

Owned by Principal Real Estate Investors of Des Moines, the Campbell Mithun Tower earned the gold certification by putting into place many environmental programs. The building reduced water used in plumbing fixtures by 55%, saving up to 2,264,000 gallons of water annually.

Now named for the largest ad agency in Minneapolis, the tower is an attention-getter. Formerly, it was the headquarters of investment firm Piper Jaffray. The building is connected to the TCF Bank Tower by a skyway sys tem.

In 2009, it was recognized by the U.S. Green Building Council with a gold-level Leadership in Energy and Environmental Design (LEED) designation for existing buildings. At that time, the 729,638 sq. ft. building was the only Class-A multi-tenant high-rise in downtown Minneapolis to achieve gold certification.

More than 80% of the electronic durable goods purchased for the building are either Energy Star labeled or EPEAT-rated (Electronic Product Environmental Assessment Tool), says Connolly.

NorthMarq reduced the installation of mercury in lamps at the site by 72%. It also secured a commitment from its district chilled water provider to discontinue use of chlorofluorocarbon (CFC) refrigerants by 2013. More than 90% of janitorial products and materials used at the property are sustainable, says Connolly.