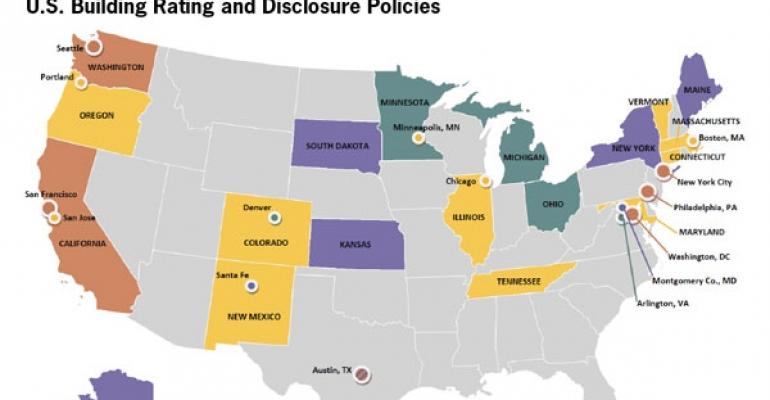 Philadelphia’s City Council recently passed an energy disclosure bill requiring commercial property owners of space totaling more than 50,000 sq. ft. to report on their energy and water usage annually. After a year’s worth of planning, discussion and amending, the bill was passed by a unanimous vote.

The bill also integrates the use of the Environmental Protection Agency’s (EPA) Portfolio Manager system, a publically accessible, Internet-based database system to track and assess the energy and water use of a given property. Mixed-use buildings, of which at least 50,000 sq. ft. are used commercially, will also be required to submit information.

All affected properties must have the prior year’s energy usage data submitted by June 30 of each year. The bill is slated to go into effect on June 1, 2013.

“What we’ve realized is that it’s the large buildings in Philadelphia that are the primary cause of greenhouse gases,” says Katherine Gajewski, director of sustainability for the City of Philadelphia. “It’s not public transit or transportation.”

Gajewski points out that Philadelphia, which also owns several commercial buildings, has been keeping tabs on its properties’ energy expenditures, looking at properties of 10,000 sq. ft. or more.

“Energy use in Philadelphia is up in the last five years or so,” she says. “We were trying to understand why it might increased and we think it’s the commercial building sector, primarily, because of things like deferred maintenance. It hasn’t been an area of focus.”

So now Philadelphia is turning its focus to those properties. The aim is to track how much a particular commercial building spends each year on energy and water costs. From there, after information has been collected consistently for several years, new legislation could be set and implemented to shave those costs. In addition, by making the information public, real estate investors and customers will be able to make more informed decisions.

“This is going to help consumers and owners become informed about their use of energy, period,” says Councilwoman Blondell Reynolds Brown, the main driver of the bill. “And that information will drive an increase in profitability by managing and lowering operating costs.”

“Each initiative we roll out we want to get it right,” says Reynolds Brown. “And that means taking your time.”

Philadelphia commercial property owners have a year to get on board and understand the process.

“[In] June 2013 the bill will go into effect,” says Gajewski. “For the next year, we are working with outreach, unrolling a marketing/education campaign and helping owners with technical assistance so that it isn’t a burden to owners. We want to help prepare them. It is an opportunity for all of us.”

It also means following the lead of those who have gone through the process already and learning from their challenges.

“We’re talking with New York City,” says Gajewski. “They’ve gone through their first year [of benchmarking] and we’re asking, ‘Was it impactful?’ ‘What was your experience?’ ‘Was it burdensome?’”

As far as how the bill is being received, it depends on who you ask, says Reynolds Brown. “Many believe and agree that this is the right thing to do,” she says, “but some would prefer to hold the information and not release it to the public. The purpose is not to penalize. That’s not the intention.”

Gajewski agrees. “Our intent is to start making end roads in benchmarking this information,” she says. “It’s ultimately another set of information to make decisions from. We want to know what costs might be like to prioritize investments for energy upgrades.”

“We have been benchmarking our managed buildings in Energy Star Portfolio Manager for several years now,” notes Thalheimer. “The tool is not hard to use, although it is important the data be correct.”

Thalheimer emphasizes the importance of offering building managers and owners training in the online system. She also echoes Reynolds Brown’s and Gajewski’s sentiments about the use of the information gathered.

“I feel strongly that a mandatory benchmarking and disclosure environment should not be that of ‘naming and shaming,’ but a positive focus on making improvements and recognition for those improvements,” she says.

In the end, it’s about making Philadelphia a more livable city. The bill, says Reynolds Brown, is just one piece of the larger green picture that the city is aiming to paint.

In 2009, Philadelphia Mayor Michael Nutter announced his Greenworks Philadelphia initiative, which aims to put Philadelphia at the top of the greenest cities in America by 2015.

“We have planted trees, we have established green parks and we are well on our way to the top five [cities that are taking steps to become more environmentally friendly],” says Reynolds Brown.

“We all want cleaner air and reduced energy use,” says Gajewski. “Those are really critical components to the kind of city we want to be.”