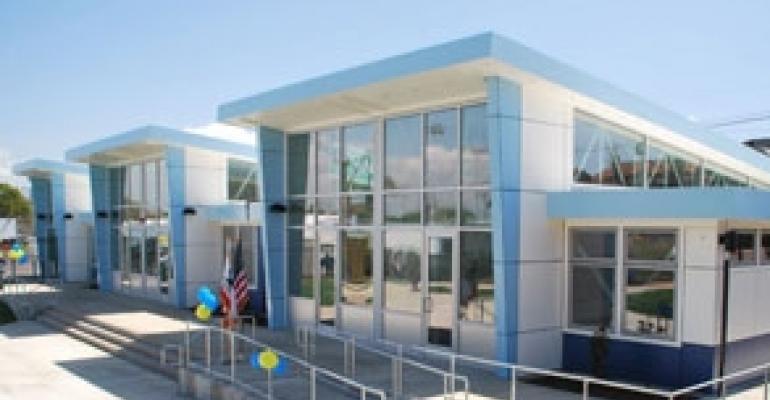 Construction of a new child development center at Lincoln Elementary School in Redondo Beach, Calif., generated plenty of curiosity among students and faculty members last spring. Significant portions of the 5,000-sq.-ft. structure arrived preassembled, to be set in place and bolted together into a sleek array of steel, wall panels and glass.

“It was kind of like Legos putting it together because it’s a prefab steel-beam facility, and the kids really enjoyed the process,” says Steven Keller, superintendent of the Redondo Beach Unified School District.

Completed in March, the student development center was built by Project Frog, a San Francisco company that has married green building and prefabricated construction techniques. Project Frog’s buildings consist of modular components made from eco-friendly materials designed and tested to reduce energy consumption by at least 25% compared with conventional structures. The structures take from one to six months to build.

“The building is vibrant; the natural lighting and taller ceilings really do engage the kids. Natural lighting as opposed to loud, traditional lighting really brings in an element of comfort for the kids,” Keller says. “Our community is very excited about the building.”

For years, modular builders have maintained that their construction process is easier on the environment than mainstream building techniques. With much of a project’s assembly occurring in a factory, weather delays and damage to building materials is nearly eliminated, making for less waste and faster completion. Work time at the job site is short, lessening disturbance to the soil and air from construction and vehicles.

“A lot of the materials we use have recycled content in them, and people like the idea that our product is basically steel and concrete,” says Brown. “It’s not wood trailers or wood modules that use up trees.”

In 2009, NRB completed its first LEED-rated, modular commercial project: The Xstrata Nickel Rim South Office and Dry Complex, a mining facility in Sudbury, Ontario, earned LEED Gold certification from the Canada Green Building Council. The 60,000-sq.-ft. structure was constructed chiefly at NRB’s plant in Grimsby, Ontario – 250 miles from the site – and the entire construction time from engineering through occupancy took less than one year.

If green modular building systems gains greater favor among developers and property owners, most building contractors will be happy to accommodate those plans, according to Ken Simonson, chief economist for the Associated General Contractors of America.

“Contractors are very willing to use/learn whatever the designer and owner specify, if they will pay appropriately. Certainly, contractors have shown lots of interest in green construction concepts and techniques, including LEED,” Simonson says.

For its part, much of Project Frog’s 20 completed projects are on school campuses, reflecting the company’s early focus on education. Three clients have constructed Project Frog buildings for office use, however, and the firm is actively marketing itself to office, retail, and healthcare operators, according to Project Frog President Adam Tibbs.

“We are pretty diverse in who we are selling to now,” he says. “Some people think we just do schools, but we are looking to grow are in other commercial spaces -office, healthcare and retail.”

At Project Frog, prices start at about $150 per sq. ft. and rise depending on the overall design and quality of interior finish work. Project Frog’s largest building to date measures 10,000 sq. ft., but the company is developing new modules that will allow construction as large as 70,000 sq. ft. says Tibbs. That product will become available by the second quarter of 2012.

A number of financial backers are excited about the firm.

In September, GE Energy Financial Services led a $22 million investment round in the modular building firm. Project Frog will use the funds to expand its sales pipeline and execute on orders. Joining the GE business unit in the funding round were Claremont Creek Ventures, Greener Capital Partners and RockPort Capital Partners. The investment amount contributed by each firm was undisclosed. Based in Stamford, Conn., GE Energy Financial Services controls approximately $20 billion in assets.

GE is pursuing the U.S. Green Building Council’s Leadership in Energy and Environmental Design (LEED) certification for several buildings at the center, and the Project Frog component will showcase the corporation’s commitment to environmental responsibility.

“The campus build-out will be over multiple years, so they wanted to get something up fast to show the direction they were going,” Tibbs says. The Project Frog structure for GE is slated for completion by the end of this year.

GE’s investment in Project Frog formed part of the second phase of the ecomagination Challenge that it launched in January to promote energy-efficient building technology. So far, GE and its partners have invested or committed to invest $134 million in the energy- and power-grid technology developers selected as winners in the challenge. The challenge program has also produced 22 new commercial partnerships and resulted in the acquisition of FMC-Tech, a smart grid technology company selected in the first phase.