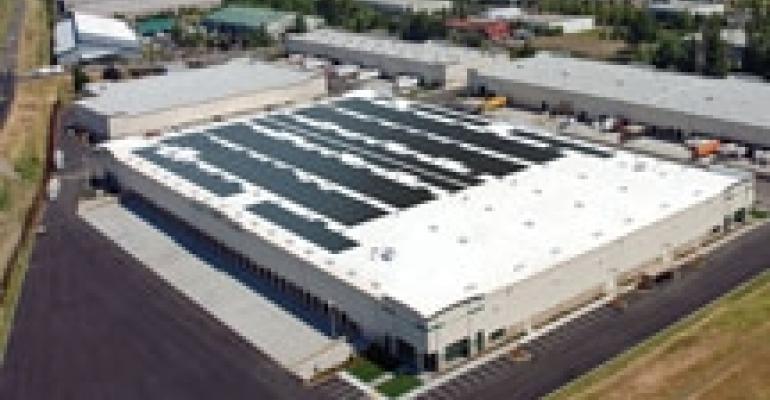 An Oregon utility company will install a 1.1 megawatt photovoltaic power generation system on three industrial roofs it has leased in Portland from distribution center provider ProLogis. In the second deal of its kind this year by ProLogis (NYSE: PLD), the company is moving toward a goal of covering 65 million sq. ft. of commercial buildings with solar panels in the next five years.

“ProLogis is committed to implementing enough renewable energy systems to obtain a combined generation capacity of over 25 million kilowatt hours per year by 2010,” says Jack Rizzo, ProLogis’ managing director of global construction. “This project will certainly help us achieve that goal.”

Portland General Electric (NYSE: POR), an electric utility that serves approximately 813,000 residential, commercial and industrial customers in Oregon, has leased the roof of a 246,000 sq. ft. distribution center at ProLogis Park PDX for the bulk of the solar installation. Known as Building 4, the structure in northeast Portland will provide a platform for panels generating 534 kilowatts.

The project is expected to reach completion by the end of this year and will constitute the largest photovoltaic installation in the Pacific Northwest. Each site will consist of building-integrated, thin-film solar material, which is lighter and requires less structural support than traditional crystalline solar panels. The service provider chosen to integrate and install the system, Solar Integrated Technologies, has worked with ProLogis on solar energy systems in both France and Spain.

ProLogis now has approximately six megawatts of photovoltaic projects installed or under development globally. In Europe, ProLogis has solar installations in France, Spain and Germany. In addition, the company has completed three wind turbine installations in Japan for a total of 68 kilowatts.

Energy Trust of Oregon Inc., a nonprofit organization dedicated to promoting energy efficiency and clean renewable energy, is providing $1 million in incentives to help fund the project. US Bank and Portland General Electric have formed SunWay 2 LLC to own and operate the system and to secure state and federal solar tax credits to help finance the project.