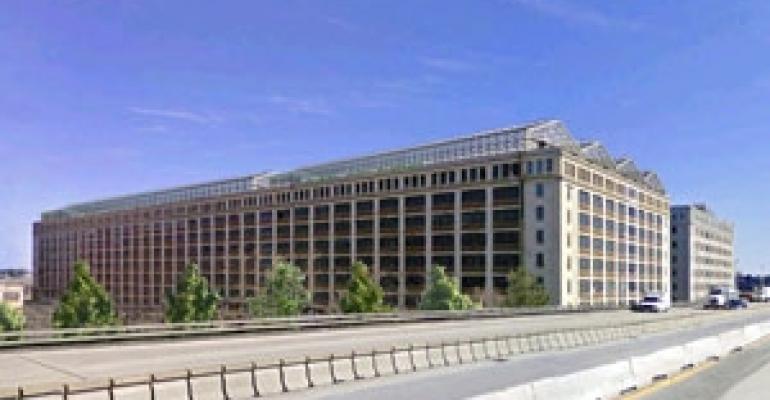 When Centrum Partners took over the Bradley Business Center on Chicago’s North Side in 2011, the company wanted to transform the 21-acre commercial campus into a cutting-edge location with tenants poised for the new economy.

That’s why it made perfect sense to partner with New York-based BrightFarms to turn one acre of the complex’s rooftop from vacant space into a hydroponic greenhouse—a deal that was unveiled this week.

The farm will grow 500,000 pounds of lettuce, tomatoes and herbs annually, to be sold directly to supermarkets, community markets and other venues.

“A green component is always on our minds,” says Michael McLean, senior vice president for Centrum Partners, which owns the property together with New York investment partner Angelo Gordon & Co. “BrightFarms brings a very creative business to the property, which is part of our vision. These are people who are very forward-thinking about the new economy and we’re excited about that.”

Centrum is on the vanguard of the rooftop agriculture movement.

Green roofs—using rooftop space with a thin covering of soil for growing vegetation—have gradually become more popular within the past decade. As of 2011, there was 36 million sq. ft. of green roofs in North America. Green roofs provide insulation, alleviate storm water problems, boost the life of a roof and have been linked to increased rent and worker productivity.

But using rooftop space to grow food is far less common. Steven Peck, president and founder of the industry association Green Roofs for Healthy Cities, estimates there are less than 20 rooftop agriculture sites now nationwide. Some are farms with layers of soil and crops and others use hydroponic greenhouses.

“The people who are doing it are pioneers,” Peck says.

Rooftop farming has many upsides

Last month, Green Roofs for Healthy Cities held its first Urban Agriculture Summit in Toronto, bringing together a sold-out crowd of 650 people to learn about rooftop agriculture. Next month, the group will hold its 10th green roof and green wall conference, Cities Alive, in Chicago.

Not every roof is an ideal candidate for rooftop farm, Peck points out. The roof must be able to withstand the extra weight, be accessible for those who will work on the farm and provide enough space not already taken up by equipment. Because a rooftop farm often requires a new waterproof roof membrane, it sometimes doesn’t make sense to install one until the end of the life of the existing membrane, he says.

But there are many advantages. The companies that install rooftop farms pay all costs of construction. Rooftop agriculture carries many of the same environmental benefits as traditional green roofs. Rooftop farms often capture waste heat from buildings to use in their greenhouses in winter times, says Kate Siskel, BrightFarms’ marketing associate. That means you have to pay less to cool, say, a facility with industrial ovens or a heat-emitting data center.

Rooftop agriculture projects also usually set up a system to capture storm water run-off, Siskel says. They provide some of the same insulation as a traditional green roof, which saves on heating and cooling. Some roof farms can even contribute to a building’s LEED certification.

Then, there is the fact that a rooftop farm is a tenant like any other in a commercial building. Several rooftop farming companies declined to say how much they pay in rent, but Peck says it varies from .50 to $2 per sq. ft. It’s not a lot, but Peck notes, “right now they’re getting zilch.”

“Roof space is a valuable asset and we need to use those spaces,” he says. “We need the commercial building industry to wake up and learn that their roofs can do a lot more for them and for their neighbors.”

“If I had a million square feet of roof space, I’d definitely be asking what those roofs can do for me,” he says.

At the Standard Motor Products Building in Queens, N.Y., a soil-based rooftop farm has been in place since 2010, operated by the company Brooklyn Grange. The 43,000-sq.-ft. farm was a good move not only for the rental income and environmental benefits, but also as a way to set the property apart, says Ashish Dua, owner of Acumen Capital Partners, which owns the seven-story commercial loft.

“I think it does have an impact on our occupancy rate and rents,” he says. “I think it’s one of those things that distinguishes our building and sets it apart, and that helps occupancy. The fact that we’re into being green and socially and environmentally responsible—tenants want to be a part of that.”

Tenants are allowed to use the space for lunchtime recreation, the building has periodic dinner parties on the roof and a farmer’s market in the lobby sells produce grown right upstairs.

But Robert S. Best, executive vice president at Jones Lang LaSalle, says he still thinks it’s a tough sell. There are no green roofs or rooftop farms within the JLL portfolio, even though the company is an environmental leader in many other ways.

Best says building owners worry about whether a green roof or roof farm would cause problems with the roof that would void the warranty. So many urban roofs are cluttered with cooling towers, elevator equipment and window-washing rigs, making it hard to find space.

“My main question would be, ‘Why?’” Best says. “To get all the equipment on the roof, to put in all the beds, it’s such a major undertaking—is it really worth all the trouble?

“I think the reason you don’t see a lot of it is that it’s not worth all the trouble that a green roof brings with it, at least for the big commercial property owners to even think about,” Best says.

Those who operate rooftop farms admit they have a tough row to hoe.

“There are people who are extremely enthusiastic about it and people who are hesitant,” says Siskel, of BrightFarms. In addition to the planned project at the Bradley Business Center in Chicago, it has secured supermarket partners to buy produce in Oklahoma City and St. Louis, but in both cities the company is still looking for a suitable farming location.

“There is an abundance of space in cities that is not being used and we have the opportunity to repurpose it,” she says.

Before the end of the year, BrightFarms expects to break ground on a 100,000-sq.-ft. hydroponic greenhouse at a former Navy warehouse in Sunset Park, Brooklyn. The farm expects to sell 1 million pounds of produce a year to local supermarket chains and is projected to be the largest rooftop farm in the U.S.

The building has been vacant since 2000 and is being developed by Salmar Properties, which bought the building from the city for $10 million.

McLean, of Centrum, says his company was reassured to take the leap into rooftop farming because of BrightFarms’ 10-year track record and reputation as one of the largest rooftop farming companies in the nation.

“What they’re doing is going on top of a building to make use of useless space,” he says. “They’re generating money and jobs and they’re getting produce to an urban center where people usually have to pay twice as much to import it from California or Mexico. It’s a wonderful story and it’s totally part of what we’re trying to do.”