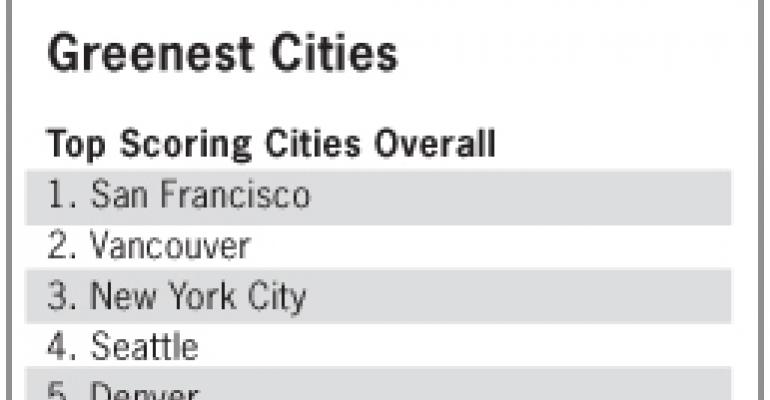 There’s a green hue to the Golden Gate City, which ranks No. 1 among 27 U.S. and Canadian cities in a recent study.

New York, Seattle, Denver and Boston rounded out the top five U.S. cities. San Francisco and Vancouver were the only cities to place in the top 10 of all nine categories. Researchers chalk up the Bay City’s high marks to a comprehensive, community-wide approach to protecting the environment.

Specifically, San Francisco ranked first in waste management thanks to the highest rate of municipal recycling, which was mandated by city ordinance in 2009.

Seattle’s position as the top green-buildings city stems largely from having been one of the first communities to mandate Leadership in Energy and Environmental Design (LEED) certification for municipal building projects.

The city with the highest proportion of LEED-certified buildings to total inventory, however, went to Atlanta, which ranked eighth on the buildings list.

“The Green Cities Index demonstrates that America’s cities are the driving force behind the nation's sustainability efforts,” says Eric Spiegel, president and CEO of Siemens.

“Despite the fact that we do not have a federal climate policy in the United States — and no federal carbon standard — 21 of the 27 cities in the index have already set their own carbon reduction targets,” adds Spiegel.

In its fifth year, the study found a link between local wealth and higher green scoring on the rankings. Essentially, communities that can afford green programs are more likely to adopt green practices and policies.