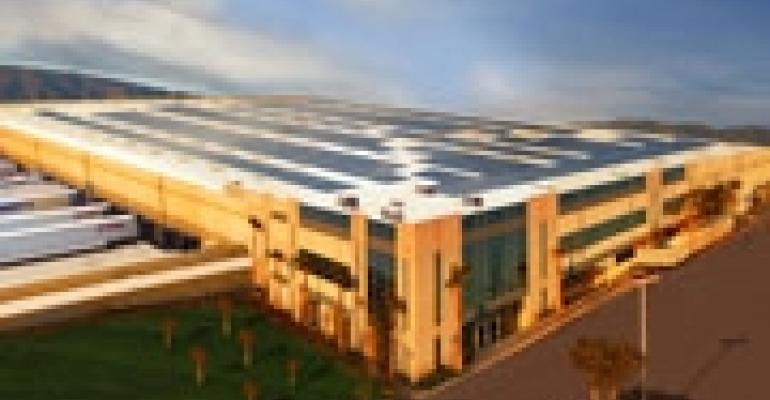 By late summer, the roof of a building in ProLogis’ Kaiser Distribution Park in Fontana, Calif., will be covered in panels capable of generating 2.2 megawatts of electricity or enough to power 1,426 homes. Working with ProLogis and other landlords in the Inland Empire, San Bernardino and Riverside counties, Southern California Edison (NYSE:EIX) will complete five to 10 additional installations in a start-up phase this year. Each site will generate 1 megawatt to 2 megawatts of power that will flow directly into the local power grid.

Terms of the first deal were undisclosed, but the lease rate is based on the quality of power produced by the installed panels, according to Drew Torbin, sustainability manager at ProLogis. The utility provider will pay for labor and materials. “The return on investment is infinite, as there is not any investment by ProLogis,” Torbin says. “Currently, we expect this deal and future roof leases to be long-term leases of 20 years.”

Disruption to tenants will be minimal because the installation is on the roof. In fact, ProLogis will serve as construction manager for the first installation, receiving a fee of approximately 4% of installation costs. The company hopes to serve in that same capacity on future installations at its own properties and those of other program participants, Torbin says.

Southern California Edison, a subsidiary of Edison International, serves more than 13 million residents in Central, Coastal and Southern California and is the state’s largest electric utility. The company has asked the California Public Utility Commission for $875 million to purchase and install new-generation photovoltaic panels on commercial rooftops, and commissioners are expected to study the proposal for about nine months before deciding whether the project is cost-effective for power customers.

That means the utility company is taking a risk by beginning installations now with its own capital, but the odds for state approval are strong: Thanks to recent advances in design and materials, Southern California Edison can acquire and install its panels for about $3.50 per watt, which is less than half the going market rate for installed photovoltaic systems, according to information the company filed with the public utility commission.

If the commission approves funding as expected next year, the local utility aims to install 50 megawatts of solar panels on commercial buildings each year until it reaches a goal of 250 megawatts, enough to serve 162,000 homes. Collectively, the multi-building network would be the largest photovoltaic power generation facility in the world, according to Gil Alexander, spokesman for Southern California Edison.

“The best way I’ve found to explain it is that we’re going to build a utility power plant,” Alexander says. “This one is solar, this one you’ll never see and you’ll never hear it, it doesn’t pollute anything, and it’s on two square miles of leased property.”

California’s utility companies are mandated to produce 20% or more of their energy from renewable resources by 2010, and Southern California Edison is about halfway there: Peak usage for the utility was 22,300 megawatts on a hot July 23 last year and today the company provides its customers with 2,200 megawatts from renewable sources, including 354 megawatts of solar-generated electricity. The additional 250 megawatts anticipated from the rooftop program will provide a tremendous boost toward renewable energy goals, Alexander says.

Additionally, the company hopes the lower-cost photovoltaic systems it uses will inspire individual property owners to install their own systems. Gov. Arnold Schwarzenegger’s Million Solar Roofs initiative has set a goal to create 3,000 megawatts of new, solar-produced electricity by 2017 by providing incentives to homeowners and businesses that install solar panels. While Southern California Edison’s program isn’t connected with those statewide incentives, Schwarzenegger praised the company’s efforts to tap the rooftops of commercial buildings and urged other utilities to follow the power provider’s example.

“These are the kinds of big ideas we need to meet California’s long-term energy and climate change goals,” Schwarzenegger says. “If commercial buildings statewide partnered with utilities to put this solar technology on their rooftops, it would set off a huge wave of renewable energy growth.”

Owners of commercial property portfolios should consider the energy and financial benefits to be gained from their rooftops, according to Arno Harris, CEO of Recurrent Energy Inc. The San Francisco-based company offers what it calls “Solar as a Service,” whereby it rents commercial rooftops where it installs, owns and maintains solar panels. The company’s model enables a landlord to collect a rental fee from the roof while providing tenants with access to green power generated on site.