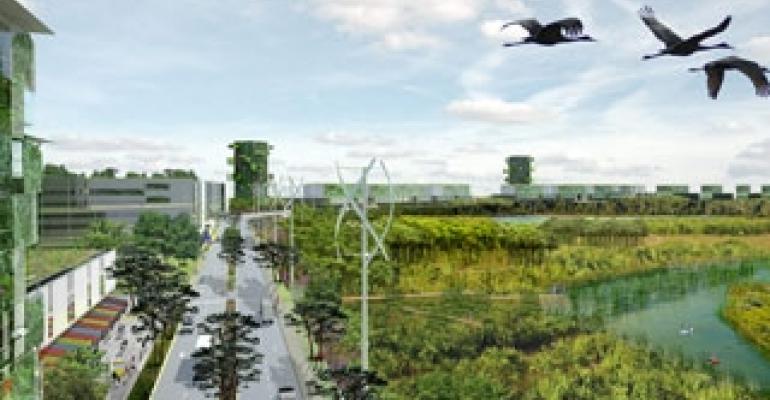 Long before Anthony Pugliese bought 27,000 acres located in Osceola County in Central Florida, he considered himself an artist and designer of sorts. Growing up in New Jersey, his childhood role models included Thomas Edison and Leonardo DaVinci, men who invented and created their bold new ideas.

In his early career, Pugliese invented the Natural Look Pool, still available today through a New Jersey-based family business, Pugliese Pools. It was during the harsh northern winter when the pool business slumped that the entrepreneur turned to buying and rehabbing distressed industrial properties to keep the pool employees busy.

Thirty-five years later, Pugliese, 62, is the president and CEO of Pugliese Development Co. based in Delray Beach, Fla., which is in the planning stage for building an eco-sustainable city, called Destiny, which will encompass 41,300 acres. The Clinton Climate Initiative recently recognized the project as one of 16 large-scale urban projects that demonstrate cities can grow while striving to reduce on-site carbon emissions to near zero.

“We are zeroing in on renewable energy,” says Pugliese. “We would like to be the Silicon Valley of green technology at Destiny.” The vision is to create America’s first sustainable city, which will attract eco-friendly companies and environmental research groups to provide all levels of “green collar” jobs, from manufacturing to research and development.

The developer has already signed a memoranda of understanding with several technology companies. Pugliese envisions a business community made up of low voltage LED lighting and solar panel manufacturers, composting companies, and other firms that make existing products, such as concrete and wood, better and stronger.

Some 27,000 acres of the 41,300-acre project have been paid for at a cost of roughly $1.35 million. “Everything we do right now going forward, we pay basically out of pocket,” the developer says. Eventually, the project will use community development districts, or CDDs, to finance infrastructure. At this point, however, there is no long-term financing in place.

Planning the infrastructure has been a painstaking process, with technology changing almost by the minute. For instance, Pugliese was prepared to sign a contract for a 10-megawatt solar plant, which could produce power at $1 per kilowatt. Then he was approached by another company, whose solar technology brought down the cost to about 40 cents per kilowatt.

The infrastructure will feature a system that recycles gray water irrigation as well as solar power. Outlets for electric cars will be placed conveniently throughout town. A piping system that will carry the latest fiber-optic cable technology will run through dedicated easements. And there have been recent discussions of a biomass plant being built outside of Destiny, notes Pugliese, from which local manufacturers could purchase steam and energy.

For now, the developer is flagging wetlands and preparing to secure Army Corps of Engineer permits, while the design, or look of the city is swirling around a drawing board.

And building your own city — as opposed to redeveloping an existing one — has its merits. “Here we can start from scratch,” say Pugliese. “We have a clean slate so we can dream and design what we want from the very beginning.”