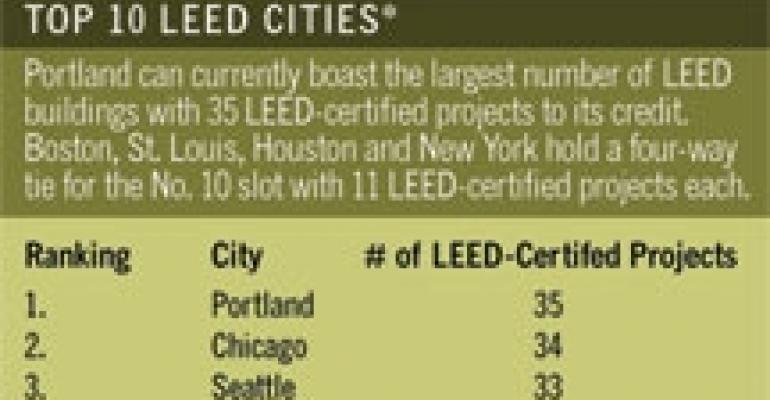 Given the focus on hot button issues such as rising energy prices and global warming, it’s no wonder cities are focusing on green initiatives ranging from improving air quality to promoting energy efficiency. What that means for commercial real estate builders is that cities are not only encouraging green building but more and more cities are requiring green building practices.

According to the U.S. Green Building Council, 27 states, 15 counties and 87 cities have either passed or are in the process of introducing specific legislation or ordinances related to sustainable design in public and/or private development. Los Angeles, for instance, is in the process of putting a new sustainability initiative in place as part of its goal to become the “greenest big city” in America. City leaders sat down last spring to craft a comprehensive green building plan aimed at transforming Los Angeles into a more environmentally friendly city.

The proposal includes more stringent green building practices, expedited processing for developers and a new “Green Team” dedicated to smoothing the path for green building. One of the key components to Los Angeles’ plan is a “50,000 sq. ft., 50-unit threshold.” Buildings that meet that minimum size threshold are required to follow guidelines for Leadership in Energy and Environmental Design (LEED) certification.

“We are moving towards having more sustainability standards incorporated into the building and zoning codes, which will likely be the fairest way to address these requirements,” says Krista Kline, urban planning and design coordinator for Mayor Antonio Villaraigosa’s office. Although buildings are not required to obtain official certification, they do need to follow the LEED checklist on issues ranging from reducing water use to incorporating recycled building materials.

Those buildings that pursue a silver level or higher LEED certification will receive incentives that include fast-track status through permitting and review in areas such as building safety, power and public works.

Los Angeles’ sustainability initiative is expected to go before the city council in early 2008. When it passes, which is expected, the city’s new green building requirements would be effective as of July 1, 2008. The next step will be to encourage sustainable design in existing buildings with retrofits and renovation. That component will likely be more incentive-based to encourage participation, Kline notes.

Cities such as Seattle, Washington, D.C. and Atlanta are veterans when it comes to sustainable building programs. Atlanta, for example, leads the country in LEED certified buildings with a total of 53 projects either completed or underway.

Part of Atlanta’s success is due to the fact that private sector developers have embraced green building. “Developers recognize that this is not just a fad, but a trend sweeping the country that benefits them in terms of energy savings and a more environmentally friendly impact, as well as being a plus on the marketing side,” says Steven Cover, commissioner of the department of planning and community development for the City of Atlanta.

Atlanta also is likely to incorporate green building requirements into building codes for both public and private developments. The city already has an ordinance on the books dating back to 2003 that requires all new and major renovated city-financed construction projects greater than 5,000 sq. ft. or $2 million in cost to meet LEED silver-certified criteria. Ultimately, such requirements will become part of an ordinance that deals with all new construction, Cover notes.

Since the U.S. Green Building Council and its LEED certification program began about a decade ago, approximately 3 billion sq. ft. of building space has gone through the LEED program. “As impressive as that is, it really only scratches the surface when you look at the totality of the building stock out there today,” says Austin Mayor Will Winn.

The City of Austin, Texas is attacking sustainable buildings in both new construction and renovation. In 2008, for example, the city will be working out new codes that will make commercial construction 75% more energy efficient by 2015. “And, despite some opposition and controversy, we plan to adopt an ordinance requiring basic energy efficiency standards on existing homes and buildings at the point of sale,” Wynn says.