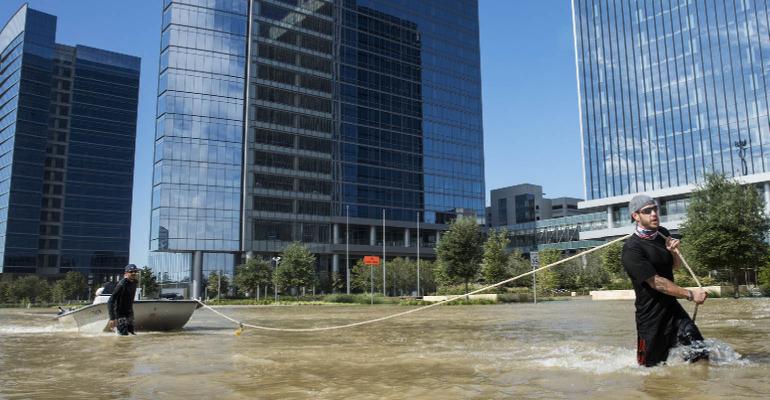 Some $8.9 billion of loans packaged into commercial mortgage-backed securities since the financial crisis are supported by Houston-area offices, malls and hotels.

Some $8.9 billion of loans packaged into commercial mortgage-backed securities since the financial crisis are supported by Houston-area offices, malls and hotels, Morgan Stanley analyst Richard Hill said in a note Monday. And, across Texas, almost $30 billion of these loans have exposure to official disaster areas, according to Trepp, a specialist firm that tracks such debt.

Harvey, which has already broken the nation’s rainfall record for a single storm, couldn’t come at a worse time for the epicenter of the U.S. oil industry. A three-year slump in energy prices that’s seen oil average $49 per barrel this year has sent Houston office vacancies soaring and propelled some loans tied to the region’s property on to credit graders’ watch lists.

“The area in general has been on everyone’s radar,” according to Kin Lee, a money manager at Angel Oak Capital Advisors, which manages $7 billion.

Commercial mortgage-backed bonds tied to Houston-area buildings have an average 3.5 percent exposure to the city, but that climbs as high as 19.2 percent for some notes, according to Morgan Stanley.

Before the storm, cutbacks at energy companies and a glut of new buildings were already taking their toll on Houston.

More than 19 percent of office space stood empty in the three months through June, up from 14 percent just three years ago, according to Reis Inc., a real estate research firm that sees nationwide vacancies at 16 percent. About 11 million square feet of space is available to sublease in the city, the most since at least 1998, according to CBRE Group Inc.

“In the immediate term, what it does is cause some sort of elevated expenses for landlords -- you’ve got cleanup and whatever damage not covered by insurance,” Bloomberg Intelligence analyst Jeffrey Langbaum said. There shouldn’t be any near-term impact on revenue for buildings that are leased but, “if companies end up moving, or go under, there will be longer-term disruption.”

Flood damage could jeopardize the payoff of about $1.13 billion in loans maturing in the next 12 months, analysts at Morningstar Credit Ratings wrote in a note Wednesday. About $16.2 billion of loans are tied to properties in Houston’s Harris County, which has seen catastrophic flooding, according to the report.

Large office buildings could struggle if they aren’t able to show or renovate their spaces in preparation for lease expirations, Trepp managing director Manus Clancy wrote in a note Tuesday. For example, the Westlake Park office complex houses companies like BP Plc, ConocoPhillips and Phillips 66 that may let their leases expire over the next two years. More than $170 million in debt backed by that development is already on Morningstar’s watch list.

Outside of offices, loans tied to apartments may also be at risk. Fitch Ratings estimates there are about $10 billion of Houston-area loans in CMBS that it rates. Of those, more than half are backed by multi-family properties.

Loan delinquencies for Houston-area properties may rise, as they did in New Orleans after Hurricane Katrina in 2005, according to Tracy Chen, the Philadelphia-based head of structured credit at Brandywine Global Investment Management.

“We will be expecting the same thing for the Houston properties,” said Chen, who helps oversee $72 billion. “I don’t think as investors we should react to this in a panicked way. Right now we’re still in monitoring mode,” she said.