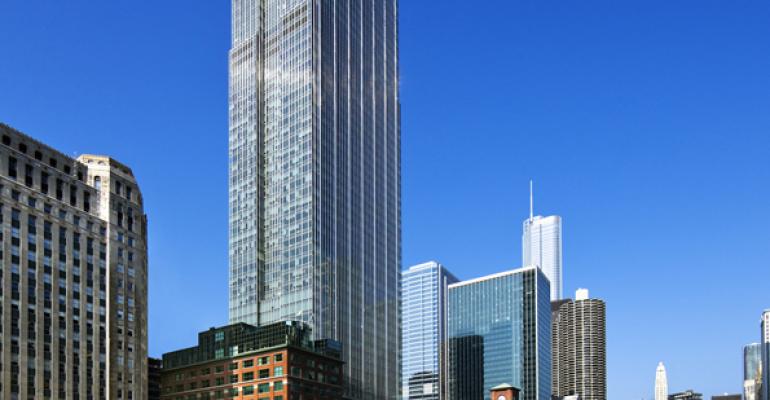 KBS REIT II and Hines, the owner and developer, respectively of 300 North LaSalle in Chicago, announced that the property has received LEED-EB Platinum certification. The tower previously received Gold certification under the LEED for Core & Shell rating system.

KBS REIT II purchased 300 North LaSalle in 2010. The tower, developed by Hines, was completed in 2009 and is still managed by the firm.

Designed by Pickard Chilton, the 57-story, 1.3 million-sq.-ft. building, located on the north bank of the Chicago River between the River North district and the Central Business District, offers 200 f.t of frontage along the river, including an outdoor plaza with seating and a large waterfront café. Rising 775 ft., 300 North LaSalle is among Chicago’s tallest buildings.

The tower is extremely energy efficient with a façade clad in richly articulated glass and stainless steel, maximizing the introduction of daylight and minimizing solar gain. Green features implemented at the property include: river-water intakes for condenser water, which eliminate the need for potable water for cooling andirrigation systems; a recycling program for paper, glass, aluminum and plastic; a green roof to reduce heat island effect; light switches with motion detectors and low-flow water fixtures throughout the building. Additionally, Hines offers its proprietary Green Office program for Tenants program, which assists in giving tenants options to reduce their carbon footprint.

300 North LaSalle earned the Energy Star label in 2010, 2011 and 2012. The building is 99 percent leased to a notable tenant roster, including the Boston Consulting Group, GTCR, Kirkland & Ellis LLP and Quarles & Brady LLP.

The Chicago Lakeside Development, a joint venture of McCaffery Interests and U.S. Steel Corporation, presented early-stage startup SmarterShade with the inaugural Lakeside Award for clean-tech innovation and commercialization at the third annual Clean Energy Challenge in Chicago. The award comes in the form of a $50,000 grant to be used by SmarterShade, enabling further research, application and execution of their go-to-market strategy.

Seventeen finalist teams assembled in Chicago at the Clean Energy Challenge to present their ideas to a diverse panel of venture capitalists, energy executives and technology experts for significant funding opportunities. Previous Challenge finalists have raised more than $30 million in funding, hired dozens of employees and deployed clean-tech pilot projects across the Midwest.

SmarterShade, a company based in South Bend, Ind., developed a patented film-based daylight management platform that enables any window to go from clear to dark with the touch of a button for light, heat and privacy control. The innovative technology can be applied as both a retrofit or new-construction solution, and results in energy efficiency gains of up to 40 percent.

"Windows have traditionally been the weakest link in the building envelope in terms of energy efficiency," SmarterShade CEO Mike Stacey said in a statement. "Traditional window treatments re-radiate heat into a room and have little to no impact on solar heat gain. According to the Dept. of Energy, ‘smart glass’ or dynamic glazing solutions can save as much as $10 billion annually on heating, cooling and lighting costs."

The third annual Clean Energy Challenge was hosted by Clean Energy Trust, a Chicago-based public-private partnership created to accelerate the development of Midwest clean-energy businesses by connecting entrepreneurs, researchers and early stage companies with the expertise and capital needed to become sustainable. In total, the Clean Energy Challenge awarded $300,000 in cash awards to student-led and early stage startup ventures to fund further research in several exciting energy technologies. Clean Energy Trust is also a member of the Chicago Lakeside Development.

HFF has closed the sale of 181 Fremont Street, a fully-entitled class-A+ office and luxury condominium development site in downtown San Francisco. HFF marketed the site on behalf of the seller, a joint venture between SKS Investments and an institutional investor. Jay Paul Co., one of the West Coast’s leading real estate development firms, purchased the site for an undisclosed amount.

The site is situated on .35 acres in San Francisco’s South Financial District immediately adjacent and connected to the new Transbay Transit Center, referred to as the “Grand Central Station of the West Coast.” The proposed 54-story, LEED Gold property will total 684,000 sq. ft. of office space and luxury residential condominiums. The office portion will occupy floors three through 36 of the tower and the residential portion of the tower will consist of 74 units situated on floors 39 through 52. Residential amenities will include a fitness center, owner’s lounge and an external balcony on the 37th floor, providing 360 degree views of the Bay Area. The property will also feature a five-level subterranean parking garage.

Founded in 1992, SKS Investments is an investor, developer and advisor of commercial real estate properties in the western United States. The firm has owned, entitled and developed more than six million sq. ft. in The Bay Area, 2.5 million sq. ft. of which is in San Francisco. SKS has consistently identified emerging demographic and market trends in advance of other market participants.

Jay Paul Co. is a privately-held, opportunity-driven real estate firm based in San Francisco. Founded in 1975, the company concentrates on the acquisition, development and management of prime commercial properties throughout California. The firm has developed more than 8 million sq. ft. of institutional-quality real estate while consistently generating attractive returns and enhancing value for its investment and development partners.

Gensler, a global design firm with more than 3,700 professionals in 43 locations on four continents, has joined the Urban Land Institute (ULI) Greenprint Center for Building Performance as its newest innovation partner. Greenprint is a worldwide alliance of leading real estate owners, investors and financial institutions committed to improving the environmental performance of the global property industry, with a focus on improving energy efficiency and reducing carbon emissions.

Gensler’s work reflects an enduring commitment to sustainability, and the firm is a global leader in green design. The firm approaches each project as an opportunity to enhance building, organizational, human and environmental performance.

The Global Real Estate Sustainability Benchmark (GRESB) has appointed Ruben Langbroek as its new head of Asia. Based in Singapore, Langbroek will be responsible for the strategic development of GRESB in Asia. He will strengthen and further develop GRESB’s relationship with institutional real estate investors, fund managers, consultants and industry associations, to assess and improve the sustainability performance of real estate investment portfolios in the region.

Langbroek previously worked for Jones Lang LaSalle in the Netherlands, Hong Kong and Singapore. As associate director in the strategic consultancy department, he was responsible for advising investors, fund managers and corporations on a broad array of portfolio matters, including sustainability measures and financial performance. As head of research at Jones Lang LaSalle in the Netherlands, he also focused on identifying sustainability best practices that enhance productive and efficient management of real estate assets. Langbroek holds Masters degrees in both building engineering and real estate. He is member of the Royal Institute of Chartered Surveyors and a LEED Green Associate.

The U.S. Green Building Council (USGBC) announced that Dan Winters recently joined the organization as senior research fellow for business strategy and finance. Winters, a 20-year veteran of real estate finance and one of the first LEED Accredited Professionals in the financial industry, is the previous recipient of the 2012 USGBC Mark Ginsberg Sustainability Fellowship. Winters will utilize his background in institutional real estate finance, alongside his capital market perspectives, to foster and strengthen the growing relationships between the green building and investment communities. He plays an important ongoing role in USGBC’s newly released Green Building Information Gateway (GBIG), a global platform for green building insights and innovation. Winters works to implement key features within GBIG while further uniting the investment community with USGBC’s existing stakeholder base. He also helped support USGBC’s efforts regarding the recently released National Academy of Sciences report that reviewed the U.S. Department of Defense’s use of green building rating systems and recommended the continued use of LEED.

Prior to joining USGBC, Winters was founder of Evolution Partners, a real estate advisory firm specializing in the financial aspects of environmentally responsible real estate projects. He was primary author of the Green Building Financial Underwriting Standard on behalf of the Capital Markets Partnership, and he worked with North American real estate firms to maximize the financial return of their sustainability efforts.

Winters’ professional background includes tenure at Russell Investments, where he served as an industry analyst in its real estate private equity group. In addition, he spent several years at CBRE’s Washington, D.C., office engaged in debt placement and underwriting for major real estate projects. He was a participant on the Washington, D.C. Green Building Task Force, which helped to pass the District’s Green Building Act of 2006, and he is a previous vice chairman of the USGBC Maryland Chapter.

Additional amenities at @BioBAT include a secure 24/7 gated facility, free on-site parking, and restaurants, as well as an on-site day care center and banking facility. The campus is also conveniently located to multiple subway and bus lines, is just a 20-minute drive to Manhattan, Staten Island, Queens and New Jersey, and is in close proximity to JFK, LaGuardia and Newark Liberty airports.

The USGBC has appointed Tommy Linstroth, owner and founder of Savannah-based Trident Sustainability Group, a full-service sustainability and green building consulting firm, as a 2013 campaign co-chair for its Value Healthy and Efficient Affordable Housing advocacy campaign.

This campaign promotes the USGBC’s green affordable housing philosophy through advocacy of smart policy changes and adoption of greener building practices by housing finance authorities, public housing authorities and the projects that the organization funds.

“One of the main issues in green affordable housing is addressing utility bills. In fact, according to a recent study, low-income households spend on average 19.5 percent of annual income on home energy costs, while the average for median-income households is just 4.6 percent,” Linstroth said in a statement. “My co-chair and I hope our campaign will expand the availability of green affordable housing nationwide and help a large number of families keep more money for needs like healthy food than paying a power bill.”