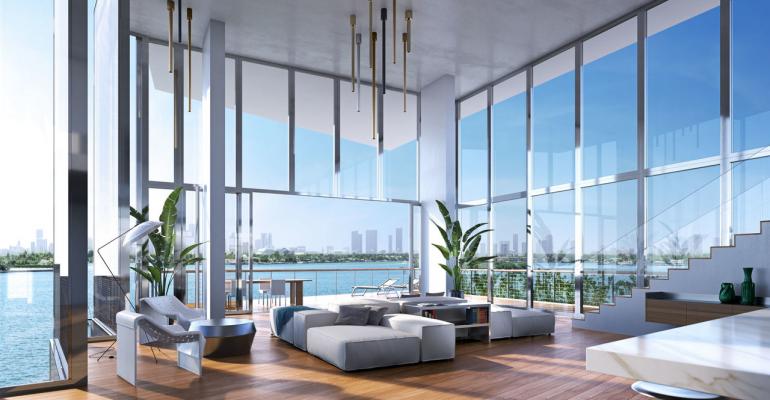 Are Miami Beach’s Luxury Towers the Future of Climate Resilience?

What luxury buildings are doing now to reassure high-net-worth buyers might very well become a necessity for everyone else in the near future.

(Bloomberg)—The Monad Terrace—a 59-unit Miami Beach luxury condominium—hasn’t been built yet, but its salesroom is up and running.

Set on the ground floor of an office building a few blocks from the Monad’s bayfront building site, the space re-creates the look and feel of a model apartment in hopes that its white marble bathroom, open-plan kitchen, and glassy bedroom might persuade buyers to spend from $1.7 million (for a 2,027-square-foot apartment) to $12 million (13,922 square feet) before the building is complete.

The Monad, designed by the French architecture firm Ateliers Jean Nouvel, has an on-site architect of record based in Miami Beach named Kobi Karp, who’s inside the salesroom on a sunny December afternoon to give tours. Instead, though, he’s talking about a squat, run-down bungalow across the street that survived 1992’s Hurricane Andrew, a Category 5 storm that hit southern Florida and inflicted an estimated $26.5 billion in damage.

“The structures that were built in 1929, 1939 had hurricane clips,” Karp explains. “They took the rebar that goes through the building and looped it through the cypress wood structure, so when the wind came to lift up the roof, it couldn’t.”

This is what Karp tries to tell people about real estate in the aftermath of Hurricane Andrew: It’s not that developers shouldn’t build on Miami Beach. They should simply make better buildings.

If you go by its specifications, the Monad is just such a structure. By putting the parking garage on the ground level and lifting the Monad Terrace’s lobby 11.5 feet above sea level, its designers elevated the structure’s living spaces above some of the most dramatic storm surges to date (though surges are expected to rise), and by making the glass and metal supports strong enough to withstand a Category 5, they made it close to hurricane-proof, too. Finally, the building has pumps for the garage, so if it does flood, the water won’t stay there for long.

“Every progressive architect today looks at [climate change] as an opportunity to create a statement and a solution,” says Karp, taking a sip from a miniature bottle of Perrier.

What luxury buildings are doing now to reassure high-net-worth buyers, in other words, might very well become a necessity for everyone else in the near future.

The Monad Terrace isn’t alone—multiple buildings in Miami Beach, and South Florida in general, come with similarly elevated ground floors and pump systems. But as the co-creator of a building that came on the market just as Hurricane Irma brought to the world apocalyptic scenes of Floridians caravaning out of the state and reporters waist-deep in seawater, Karp is perhaps the most vocal of these stakeholders. After all, he needs to reassure potential buyers that their sizable investment will stay dry.

“Is flooding a problem?” he asks. “Yes. Are we going to have a solution for it? Yes.”

With flooding in the Miami metropolitan area already an urgent problem—so-called king tides rise from beneath the city through its porous limestone—along with the increased likelihood of extreme weather events due to the accelerating effects of climate change, the city is in desperate need of solutions. The Monad Terrace, a super-reinforced building that goes above and beyond current, city-mandated fortifications, might point to the future of climate resilience.

“If the city of Miami Beach were, say, 10 feet high, 20 feet higher, we wouldn’t need pumps,” says Bruce Mowry, the city engineer, with more than a touch of wistfulness in his voice. “The water would just flow downhill.”

But because Miami Beach is basically at the same level as the ocean, “you have to create a gradient,” he explains. “The pumps do that.”

Miami Beach has about 30 pumps in operation, with another 40 planned. They’re currently used to handle water that mostly comes in from the ocean and sky, rather than water from underneath the ground.

“We don’t get as much water coming from the bottom as you might think,” Mowry says. “Right now we’re high enough that we don’t have the water shooting up through the ground in the city. But in 30 to 50 years, or whatever time it takes for the ocean to go up, water will become closer and closer to our surface, and our groundwater.”

Mowry has already changed building specifications and zoning regulations to insure that new houses are built higher, but when he started the job in 2013, zoning regulations actually prohibited builders from elevating their houses past a certain point for fear of ruining some neighborhoods’ residential aesthetic.

Occasionally, his perspective is coolly apocalyptic.

“That building’s not for the future,” Mowry says, nodding to a low-slung Macy’s across the street from his office. “I mean, it’s built flat on the ground.”

In a mini-tutorial that might send chills down the spine of the building’s insurance broker, he expands on the Macy’s vulnerabilities: “The water comes right up the door front, and it cannot easily be modified,” he continues. “At some time in the future that building’s going to basically have significant modifications to make it able to survive, or it’ll have to be replaced.”

While Karp, the architect, is laboring to sell a dream of climate-resilient fine living to out-of-towners, and Mowry is doing his best to make sure they have a city to come to at all, the rest of Miami is eager to preserve what it has. Eventually, its efforts might lead to a lot of buildings that look like the Monad Terrace.

First, the city has a long way to go.

He checks off a handful of threats: sea level rise, intense rainfall, hurricanes that produce up to 8 feet of storm surges, and king tide flooding. “They’re real,” he says, sitting in a 40th-floor conference room in downtown Miami. “Forget about the modeling, forget about 5, 10, 15, 20 years from now. I’ve seen them.”

Residents just voted in favor of the Miami Forever Bond, a $400 million general obligation bond intended to shore up the city’s ability to withstand extreme climate events. “They have voted to tax themselves,” Suarez says. “That’s very unusual, but when you think of your most prized possession, oftentimes your biggest investment is your home.”

Although famous luxury buildings such as the late Zaha Hadid’s upcoming One Thousand Museum or the architect Rafael Viñoly’s One River Point might be able to ride out a storm unscathed, thousands who live in houses and older apartment buildings are vulnerable to storms and flooding.

The City of Tomorrow

What seems likely, planners say, is that in the middle to long term, even Miami’s lower-class neighborhoods will be modified, upgraded, walled in, and, wherever possible, literally jacked up. It will become a city that’s elevated to withstand a weather-related siege.

In an area along Brickell Bay Drive, which features multiple buildings that were constructed in the 1970s and 1980s, “what will most likely be the solution there is a raised sea wall,” says Suarez. “You are not going to raise all those buildings to the necessary height, and the buildings that are adjacent to them are newer and built at a higher level.”

There are also, Mowry says, possible modifications to the buildings from the ’70s and ’80s that could raise them to a resilience comparable to that of Monad Terrace.

“Water-tight envelopes,” for instance, which are basically membranes that keep rain and sea spray from soaking through a building’s walls, should probably be a basic requirement, he says. (New luxury buildings are generally made from nonporous materials.) Without that coating, even if a building survives a storm, its masonry could get soaked through, leading to toxic mold or rot.

Residential houses, meanwhile, can be raised “simply,” Karp says. “We cut the piers, the concrete’s soft, we put steel jacks in, we jack up the house, and we put it back in place,” he says. “Not a problem.”

The real point, Mowry says, is that if you scale resilience to a citywide level, no matter what that resilience calls for, it can be done. Monad Terrace and its ilk, in other words, seem to have excessive precautions built into their designs, but there’s a good chance that in 30 or 40 years these elevated, stormproof towers could be the norm.

“We raise our standards,” Mowry says, “and it applies to everybody.”