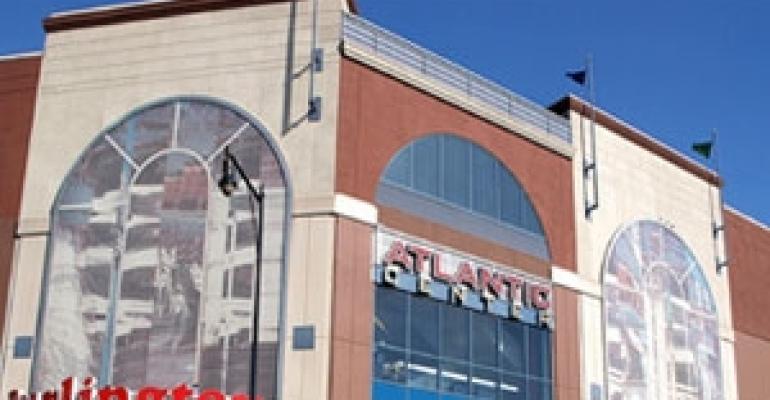 If Forest City Enterprises decides to go ahead with the redevelopment/remerchandising of its Atlantic Center Mall and Atlantic Terminal Mall properties in Brooklyn it might be able to remake the surrounding area into an outer borough Fifth Avenue, retail industry insiders say.

Forest City, the commercial real estate developer behind the soon-to-open Barclays Center arena and entertainment venue, revealed that it’s now reviewing the possibility of upgrading its nearby retail properties. A spokesperson for the company said there are no definite plans as of yet; Forest City executives are “just thinking out loud.”

If the company decides to go ahead with the project, demographics in the surrounding area certainly offer a lot of potential. There are 109,409 people living within a one-mile area in Downtown Brooklyn, where the Atlantic Center Mall is based, with average household incomes of $109,951 a year, compared to $58,864 for Kings County as a whole, according to the New York City Economic Development Corp. (NYCEDC). The median price of a home in the neighborhood is $622,532.

Yet the line-up of anchors at Atlantic Center Mall is made up of the Department of Motor Vehicles, Burlington Coat Factory, Marshalls and Old Navy. Target, Victoria’s Secret and Bath & Body Works round up the list of tenants at Atlantic Terminal Mall, across the street.

Given enough time and provided it can secure financing, Forest City could use the one million sq. ft. or so of its development rights on the properties to build a condo/hotel combo, and start bringing in the same kinds of tenants that line Fifth and Madison Avenues in Manhattan, says Howard Davidowitz, chairman of Davidowitz & Associates Inc., a New York City-based retail consulting and investment banking firm. He brings up the possibility that the upscale department store Nordstrom, which has been searching for a site in Manhattan for years without having much success, might be happy to sign a lease in Downtown Brooklyn provided the redeveloped center is swanky enough.

“Brooklyn is getting multi-million dollar condos, but there is not a lot of upscale shopping,” Dadivowitz says. “I would say it’s a void and a possibility. A Whole Foods [makes sense there], a Bloomingdale’s definitely would make sense. Why wouldn’t Tiffany’s build a nice store there? I think they would.”

Among other possible future tenants, he lists fast fashion powerhouses H&M, Uniqlo and Zara, as well as mid-priced apparel retailers Ann Taylor and J.Crew. With retailers currently in love with urban locations, Brooklyn would provide the perfect springboard for expansion for them, he notes. Robert Yuricic, studio director with New York-based architecture firm GreenbergFarrow, who worked on the designs for the original Atlantic Center Mall, adds that upscale retailers including H&M and Sephora are already signing leases in Downtown Brooklyn, at places such as nearby City Point.

“The whole Downtown area is experiencing a revitalization,” Yuricic says. “It’s something that’s already happening and as these tenants come in, it starts to create a desire and a draw for other tenants, of similar caliber.”

“If you walk from Atlantic Terminal toward water, the tenant mix has become very interesting, with a lot of local shops catering to the growing wealthier, sophisticated customer base in Park Slope and surrounding neighborhoods: Trader Joe’s, Barney’s Co-Op, Urban Outfitters, along with many local shops selling unique fashion and accessories,” says Robin Abrams, executive vice president with The Lansco Corp., a New York City-based commercial real estate firm.

While Abrams has doubts that the Atlantic Center Mall will be able to attract the kinds of luxury retailers that line Fifth and Madison Avenues, she notes that it would be a good fit for fast fashion and national apparel retailers, including Aeropostale, Aritzia and Forever 21, in addition to the likes of Uniqlo and Zara.

What’s more, if Bruce Ratner, Forest City Ratner chairman, can get letters of intent from retailers eager to come to Brooklyn, that would help him secure financing for the project, Davidowitz adds. He can then redevelop Atlantic Center Mall and Atlantic Terminal in phases, as current tenants’ leases come to maturity.

“This would be workable: over a 10-year timeline,” Davidowitz says. “You start with a vision, and then maybe do a part of it, and if that’s successful, you get the funding for the rest.”