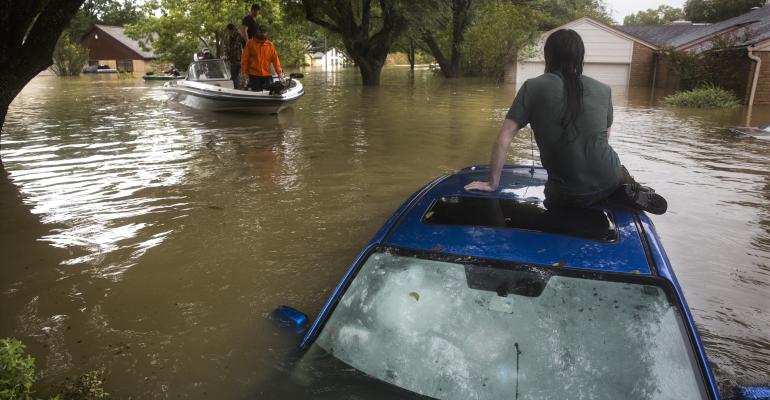 Even before the storm and the crackdown, Texas faced a shortage of concrete workers, electricians and wall-board installers, according to a survey by the Associated General Contractors.

(Bloomberg)—Jose Zamudio, who picks up day labor in a Dallas suburb for as much as $15 an hour, is considering moving to help Houston rebuild after Hurricane Harvey. There’s just one caveat.

“If I’m seeing police are picking up a lot of people or there are a lot of immigration raids, I’d leave for another state,” said Zamudio, 35, an undocumented immigrant who left behind his wife and three children in the Mexican city of Celaya about 15 months ago.

Hurricane Harvey hit as a Category 4 storm and then spent days inundating southeast Texas, the worst recorded rainfall in the continental U.S. Now, it’s about to put the effects of President Donald Trump’s anti-immigration rhetoric and actions to the test.

For months, the labor market has been tightening as the economy accelerates and Trump -- and his allies in Texas -- crack down on undocumented workers. Retail, service and especially construction companies have to search high and low to fill openings. Houston’s cataclysm is the extreme expression of the trends: The city faces one of the biggest reconstruction projects in American history as the federal government arrests increasing numbers of the immigrant workforce that flocks to disaster remediation, and as courts weigh Texas’s new toughest-in-the-nation immigration law.

Gathering a workforce to repair the flooded city will have repercussions throughout the nation as framers, drywall installers and laborers head to southeast Texas, attracted by the work created by a hurricane and floods that damaged 100,000 homes.

“It’s an enormous distraction to have to figure out how you deal with this,” said Ken Simonson, chief economist for the Associated General Contractors of America trade group. “A lot of projects will be delayed elsewhere.”

Bill Beardall, executive director of the Equal Justice Center in Austin, Texas, which will represent poor and undocumented workers in the rebuilding, said he expects a “Wild West of unregulated labor markets.”

"It will take shape to do the urgent cleanup work of pretty dirty, nasty, contaminated kinds of places in the immediate post-rescue environment and that will phase into the reconstruction effort, which will also need low-wage workers," said Beardall, also a University of Texas law professor. He expects workers and contractors to arrive from out of state, both legitimate and fly by night, creating an "environment of wage theft and unsafe working conditions.”

The fierce competition for people handy with hammers will be intensified by the dwindling number of foreigners who can provide cheap and easily shed labor.

Nationally, arrests of undocumented immigrants rose 40 percent in the first half of 2017, compared with the same period last year, according to Immigration and Customs Enforcement. Arrests of non-criminals more than doubled. The number of immigrants fell in tandem: From Feb. 1 through the end of July, officials apprehended 56 percent fewer people at the Mexican border than in the same time period last year, 122,542 compared to 279,058.

Even legal immigrants aren’t untouched. A program that allowed seasonal workers to re-enter annually languished for seven months this year. So-called Dreamers -- brought to the U.S. as children and given temporary legal status by former President Barack Obama -- now wait months for renewals that they need to keep drivers licenses and jobs. Trump is considering ending the program and deporting those residents.

The effects have been felt across disparate sectors of the labor market, including poultry processors and meat packers, onion farms, racetracks, restaurants and hotels, as well as construction.

“It was as challenging year, yeah,” said Wendy Northcross, chief executive of the Cape Cod Chamber of Commerce, where the hospitality industry raced to replace thousands of immigrant workers who normally return on seasonal visas each summer.

The construction labor force, meanwhile, is tight. Workers were scarce even before Trump’s immigration crackdown. A July survey by the National Association of Home Builders in Washington showed 77 percent of builders reported a shortage of directly-hired framing labor, and 85 percent reported a shortage of framing subcontractors.

Twelve years ago, after Hurricane Katrina ravaged New Orleans, Hispanic labor helped rebuild, enabled by the decision of former President George W. Bush’s administration to ignore their legal status. Ads seeking a similar workforce for Houston -- willing to work 12 hours a day, six days a week, according to one -- are already on Craigslist.

But the political and the economic climate has changed.

Texas’s new immigration law threatens local officials with firing or a year in jail, and municipalities with fines of up to $25,500 a day, for failing to fall in line with Republican lawmakers’ goal to step up immigration enforcement. The law was opposed by the state’s biggest cities, including Houston. It was set to go into effect Sept. 1 until a federal judge blocked it this week, in a legal battle that continues.

Even before the storm and the crackdown, Texas faced a shortage of concrete workers, electricians and wall-board installers, according to a survey by the Associated General Contractors. For concrete workers, for instance, two-thirds of Texas contractors reported a shortage, compared with 51 percent nationwide.

David Orlando, Houston division president for Red Bank, New Jersey-based homebuilder Hovnanian Enterprises Inc., expects to lose contractors to the rebuilding effort because he can’t pay as much as the insurance industry. He said costs are likely to rise as competition increases.

“We have a fairly large base of trade labor and I will remind them of where their loyalty is,” he said. “When the remodeling work dries up, we’re still here."

While there will be a powerful incentive to overlook immigration laws, the crackdown could make workers wary, said Beardall of the Equal Justice Center. The undocumented, many supporting families at home, face the decision of whether to risk their tenuous livelihoods for a rich payday.

Ismael Sanchez, 40, who moved to Texas from California about a decade ago, hasn’t returned to Guatemala to see his wife and two children in four years. Instead, he sends home about $500 a month. He’s torn between moving to Houston for Harvey work and fleeing.

“Because of this law, I’ve been thinking of leaving Texas,” he said.

Zamudio comes early to a day-labor station in Plano, near Dallas, waiting to pour concrete or do landscaping in heat that can top 100 degrees.

“We came here to work, nothing more,” he said. “We’re not here stealing or fighting. We’re doing the work that nobody from here wants to do and, even so, they want to run us off. I don’t understand it.”