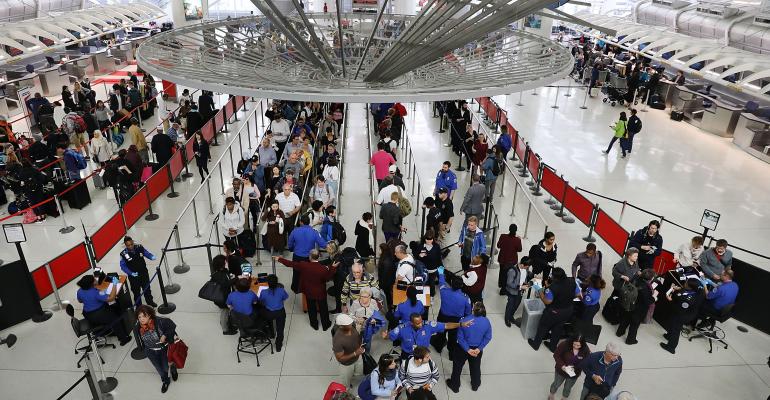 JetBlue holds exclusive rights to develop the site of JFK’s previous Terminal 6, which was torn down. The project also may involve the replacement of Terminal 7.

(Bloomberg)—JetBlue Airways Corp. is looking for investors and developers to help build a new Terminal 6 at New York’s John F. Kennedy International Airport, with possible expansion to include a second facility.

JetBlue holds exclusive rights to develop the site of JFK’s previous Terminal 6, which was torn down. The project also may involve the replacement of Terminal 7, which was built in 1972, the New York-based airline said in a statement Friday.

“It’s prime real estate in a very congested airport,” Chief Financial Officer Steve Priest said in an interview. “It’s got the potential to have great value for JetBlue, our customers and our shareholders.”

The carrier, which opened a new Terminal 5 at the airport in 2008, would lead the project, fitting in with New York Governor Andrew Cuomo’s $10 billion plan to expand or redevelop JFK’s facilities, add new security technology and improve road and rail access to the airport. Last year, a public-private partnership started rebuilding the central terminal at LaGuardia Airport, also in New York.

JFK is the busiest airport in the New York City area and ranks fifth in North America, with more than 56.8 million passengers a year, according to Airports Council International. JetBlue’s overseas destinations from New York include cities in Puerto Rico and the Caribbean.

It’s too early to discuss details including the cost, the size of the terminal and the number of gates or how many JetBlue might occupy, Priest said. He expects to issue a request for project proposals before year’s end, and for the new terminal to be open by the mid-2020s. Because of the partnership format, JetBlue doesn’t expect to devote “an expansive amount of capital” to the project, he said.

JetBlue hasn’t decided whether it might expand to flights across the Atlantic, Priest said. The airline has said it sees Europe “as a great opportunity” and holds the right to switch some planes ordered from Airbus Group SE to a version that would make such service possible.

“The one thing JetBlue is doing here is securing our future for the long term and making sure we have an avenue to grow,” Priest said. “This enables us to think about long-term growth.”

JetBlue added an international extension to Terminal 5 in 2014, and the new development would include international gates for the carrier and its 38 foreign-based partners. JetBlue’s busiest airport operation is at JFK, with as many as 175 of its 925 daily departures.