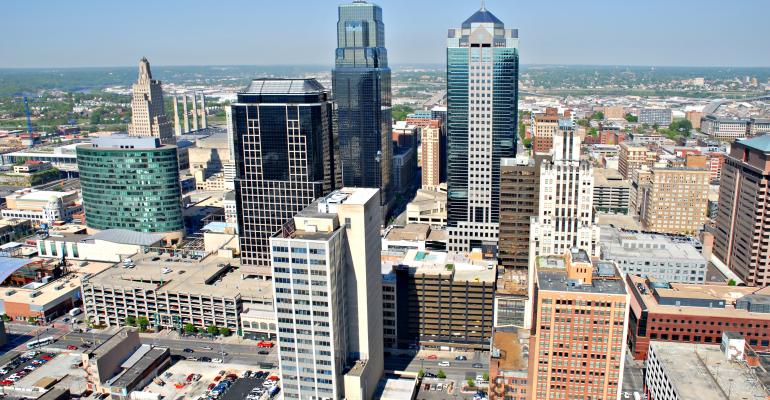 One of the projects would contain Kansas City's first new downtown office tower since 1991.

The Kansas City Council pushed forward two big building projects — one at 13th and Main streets and one at Third Street and Grand Boulevard in the River Market — after taking a timeout on the proposals in December.

The projects eventually could house as many as 1,800 jobs, and the council signed off on two ordinances Thursday that would empower City Manager Troy Schulte to negotiate development agreements, The Kansas City Star reports.

The project at 13th and Main, called Strata, would be the first new office tower in Downtown since the 29-story 1201 Walnut building went up in 1991. It would stack a 750-space parking garage on existing retail at the corner and then put office space on top of the parking. The result would be a 25-story, 250,000-square-foot tower at a cost of $94 million. The project would be developed by a partnership among developer Copaken Brooks, Jury & Associates and H&R Block Inc.

The River Market project would turn a block of surface parking into a transit-oriented development. The Kansas City Area Transportation Authority and Briarcliff Development Co. are driving the plan.

After council members sought more time to digest the proposals in December, they advanced the projects on Thursday, though the plans will return to the council again for approval, The Star reports.

Both projects seek city financing for parking garages, and the River Market ordinance passed easily, with a unanimous vote, the report says. But council members hung up on Strata, which would be built on spec, meaning without a signed tenant.

Council members expressed concern about putting the city on the hook to guarantee the debt on bonds issued for the garage but ultimately tweaked the ordinance’s language to soften its tone, the report says.