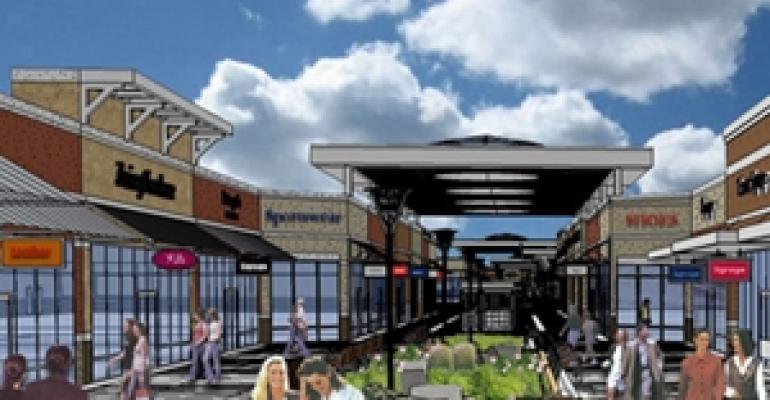 It looks like in spite of earlier expectations, both Simon Property Group and Taubman Centers Inc. are going ahead with their outlet center projects in the St. Louis area. Industry sources say construction has gone too far in both cases for either party to abandon their site. However, the fact remains that the trade area could support only one traditional outlet center, making the stand-off that much more interesting.

Simon and Taubman announced their plans for outlet center developments in Chesterfield, Mo. in the spring of 2011. Simon’s St. Louis Premium Outlets was set to contain 350,000 sq. ft. of space and boasted Saks Fifth Avenue OFF 5th as an anchor tenant. Taubman’s Prestige Outlets Chesterfield was supposed to encompass 450,000 sq. ft., though at the time the firm would not reveal the names of the retailers that would occupy the center.

In recent months, both firms stepped up development activity. In November, Simon announced additional tenant commitments, including from Nike, Cole Haan, Converse, Gymboree and Adidas, and moved up its project’s opening date to August 22, 2013. Meanwhile, during Taubman’s third quarter conference call with analysts on Oct. 25, Robert Taubman revealed that Taubman has put up walls on about half the buildings at its center and has accelerated its opening date to August 2, 2013, ostensibly to coincide with Missouri’s back-to-school tax-free weekend.

In July, Taubman also announced the names of some of the tenants that will be taking space at Prestige Outlets Chesterfield, including the Gap brands and J. Crew Factory, Brooks Brothers Factory Store, 2b Bebe and Anne Fontaine, among others.

“Retailer interest is extremely high,” Taubman told analysts. “There’s wide recognition that the market is superb and that our site is vastly superior.”

But while the greater St. Louis trade area might boast enough consumer power to support two new outlet centers in addition to the already existing St. Louis Outlet Mall in Hazelwood, Mo., Simon’s and Taubman’s projects are too close to each other for both of them to work, notes Rich Moore, a REIT analyst with RBC Capital Markets.

Even Robert Taubman admitted that given the competition for consumer dollars, return on investment on Prestige Outlets Chesterfield could be 100 basis points lower than Taubman previously expected. In July, Taubman estimated that the center would generate between $175 million and $200 million in sales.

The trick is that one of the players—most likely Taubman—might either try to attract different kinds of tenants to its property to avoid direct competition with Simon or sell the center to another operator who will convert it to a non-outlet use, Moore and Humpers speculate.

Given that Taubman specializes in more upscale malls than most big retail developers in the U.S., Moore notes that it’s conceivable Taubman executives have something different in mind for Chesterfield that a traditional outlet center. If Taubman would populate the property with luxury retailers along the lines of Tiffany & Co., it might still create a successful outlet venue even if Simon’s project is nearby, he says.

“I can’t imagine two [traditional] outlet centers right there,” says Moore, who lived in the area in the 1990s. “The only way it would work would be if the centers are different.”

That’s also a theory supported by David Stewart, vice president with real estate services firm Savills LLC, who notes that the reason Taubman is pressing ahead with the project is because outlet centers are the only viable development vehicle for the company at the moment. He suspects that both Taubman and Simon are currently holding negotiations with luxury retailers along the lines of Burberry and Prada to see who can land more upscale tenants.

“I don’t think either one is fully showing their hand right now,” he says.

Humphers offers a competing, but a somewhat like-minded theory. She notes that while St. Louis is an attractive market, it’s probably not big enough to support two outlet centers at once, a fact that both developers are savvy enough to understand. As a result, she suspects that one of the outlets might eventually be sold off and redeveloped into another retail venue.

While it’s certainly unusual for outlet center developers to get this competitive about a single project, Todd Lukasik, a REIT analyst with Morningstar, notes that both centers are small enough that even lower than expected returns wouldn’t have a significant impact on either company’s bottom line. That might explain why both Simon and Taubman are pressing ahead with their developments in spite of stacked odds.

“Taubman probably feels it has a higher likelihood of success than maybe is the view of some third-party advisors,” Lukasik notes. “They believe their site is a better site in that market. And the other thing is that these projects are generally [built] in first phase and future phases, and it maybe a situation where the company goes ahead with the first phase and then the second phase doesn’t get developed as quickly, or at all. Smaller projects might be more viable, even being so near.”