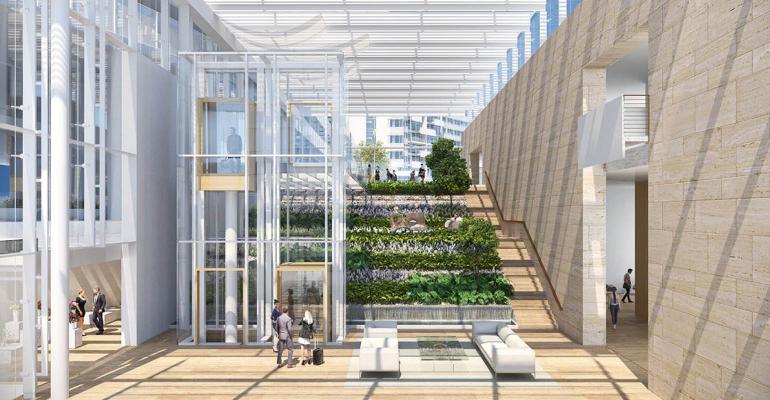 The separation, which happened earlier this, leaves Wanda without a development partner just as condo sales are about to begin.

Neither Wanda nor Athens would comment on the reasons for the separation, which happened earlier this year and leaves Wanda without a development partner just as condo sales are about to begin.

“We are taking this project forward ourselves,” Rohan a’Beckett, deputy general manager of Wanda Beverly Hills Properties LLC, said in a telephone interview. “I can confirm that Athens is not involved in the project anymore.”

Athens Group, based in Phoenix, specializes in luxury resorts, urban hotels and related residential properties. Its previous developments include Montage resorts and condos in Southern California and the Four Seasons Resort Hualalai in Hawaii. Jay Newman, chief operating officer of Athens, said the firm provided services to Wanda through May and originally planned to work on the project through its opening, scheduled for 2020.

“We brought the One Beverly Hills project to Wanda as their development partner,” Newman said in a phone interview. The firm’s work was intended to include “the modification of the entitlements to include a Wanda hotel, its development and construction, its opening and the sale and marketing of the condos,” Newman said. Wanda got city permission on Sept. 14 to open a condo-sales showroom.

Questions about investments by Beijing-based Wanda have arisen as China has cracked down on overseas acquisitions. The company, which was among the most aggressive buyers of foreign assets until recently, has sold real estate and entertainment assets in China amid government concerns about excess debt.

Wanda’s chairman, billionaire Wang Jianlin, made waves in his quest to build a global entertainment and hotel empire and overtake Walt Disney Co. in tourism by 2020. Wang once said his “pack of wolves” would devour the “tiger” of Disney’s first theme park in China.

But as the Chinese government clamped down on capital outflows, Wanda’s $1 billion deal to buy Dick Clark Productions Inc. collapsed in March after the seller, Eldridge Industries LLC, said Wanda didn’t make payments on time and missed a Feb. 28 deadline to close the deal.

People with knowledge of the matter said the split between Wanda and Athens wasn’t directly caused by China’s crackdown on overseas risk-taking. One person, who asked not to be identified because the project details are private, said the work Athens was hired for was completed in January.

The One Beverly Hills site, at 9900 Wilshire Blvd., has long been seen as a prime development parcel in one of the country’s wealthiest areas. The land is valued at $434.9 million, according to property records, slightly more than what Wanda paid for it in 2014.

The project consists of 193 luxury condos and 134 hotel rooms. It was originally entitled as a 235-unit condo development. Wanda is awaiting building permits, according to Therese Kosterman, a spokeswoman for the city of Beverly Hills. A former department store on the site has been demolished, and construction has yet to begin.

Athens is still listed on the website of the One Beverly Hills development. Its role was announced in a June 2015 press release in which David Shu, general manager of Wanda Beverly Hills, praised the firm and the project’s architect, the firm started by Richard Meier, who designed the Getty Center in Los Angeles.

The Beverly Hills project has faced disruptions before. Wanda last year defeated a ballot measure brought by Beny Alagem, the owner of the Beverly Hilton across the street, to combine two planned condo towers into one building that would have been the tallest in the neighborhood. Alagem’s representatives said Wanda’s project would snarl traffic and jeopardize the Beverly Hilton, which opened in 1953 and hosts the Golden Globe Awards.

Beverly Hills has one of the best-performing hotel markets in the country. Occupancy in the Hollywood-Beverly Hills area reached 83 percent this year through August, while room rates averaged $308, both well above the national averages of 67 percent and $127 a night, according to lodging-data provider STR.

Wanda’s other major U.S. hotel-condo project, in Chicago, is on schedule for initial occupancy at the end of 2019, according to the development partner in that project.

“We’re still under construction and we’re moving along fine,” said David Carlins, president of Chicago-based Magellan Development Group LLC, Wanda’s partner in the Vista tower. He said construction has reached the 17th floor of the 100-story building, and 38 percent of the 406 condos have been sold. The hotel will have 191 rooms.