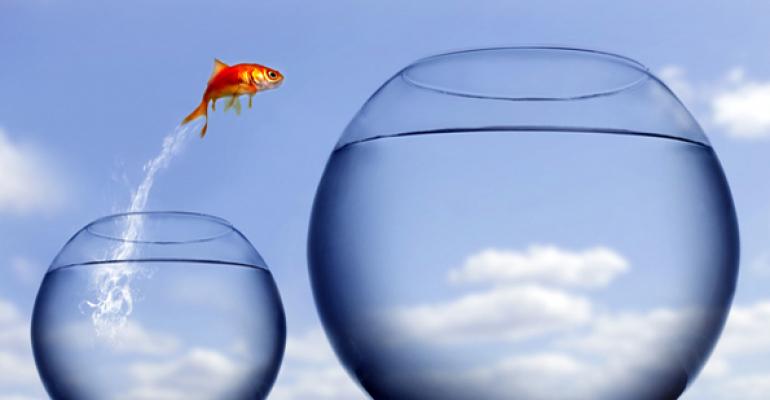 Under pressure to find good use for their money and encouraged by gradually improving property fundamentals, banks and life insurance companies upped their investments in commercial real estate in 2012. A stronger than expected thaw in CMBS lending has created a further incentive for senior lenders to become more aggressive on commercial mortgages, leading to hopes of even more robust lending activity in 2013.

While the Mortgage Bankers Association (MBA), an industry trade group, reported a 7 percent year-over-year drop in all commercial/multifamily loan originations in the third quarter of 2012, commercial banks increased their origination volume by 8 percent. Through the first three quarters of the year, banks increased their lending volume by 44 percent, according to the MBA, though life insurers’ loan volume fell 6 percent.

Overall, the MBA’s Commercial/Multifamily Mortgage Bankers Originations Index sat at 129 for all commercial lending, at 182 for commercial banks and at 191 for life insurance companies. (A score of 100 on the index equals the average quarterly origination volume for that sector in 2000.) The 182 figure for commercial banks is the highest for the sector since the second quarter of 2008. The 191 mark for life insurance companies is down from other recent quarters, with a peak of 302 reached in the second quarter of 2012, but life insurance companies as a class today have origination volumes greater than before the recession while other lender types are still below pre-recession levels.

Yet many market observers believe that both banks and life insurers will have closed 2012 with year-over-year increases in commercial/multifamily originations. A December report from Marcus & Millichap Real Estate Investment Services notes that portfolio lenders have been doing more commercial real estate transactions in 2012 than in 2011. Banks, including national, international and regional companies, accounted for roughly 25.5 percent of all commercial real estate loans closed last year, according to research by Marcus & Millichap and Real Capital Analytics, while life insurers were responsible for 18.1 percent of all loans.

When NREI spoke to Dave Clark, senior vice president of real estate with Northwestern Mutual last January, the Milwaukee, Wis.–based life insurer had a goal of increasing its commercial real estate originations by $500 million, to a total of $5 billion in 2012. The firm managed to close 2012 with nearly $5 billion in new transactions, Clark says.

“Our mortgage loan account has done wonderfully well through the downturn, with essentially no losses,” he says. “People are very happy with that performance. Combine [that] with interest rates that are low enough to be attractive to borrowers but are still higher than what you could get on corporate bonds, and I would speculate that life companies will continue to seek relative value in mortgages. This year, our origination goal would probably be 10 percent higher” than in 2012.

The same forces are driving bank lending activity, notes Gerard Sansosti, executive managing director with HFF, a national commercial real estate intermediary. “The banks have been very, very active this year,” he says. “They have the same dilemma as a lot of people in the world: They have to put money out. So they resurfaced in 2011 and [became] very active in 2012.”

Abe Bergman, managing partner with Eastern Union Funding, a New York–based commercial real estate mortgage brokerage, estimates that in 2012 the banks his company works with originated double the volume of commercial real estate loans from the year prior. In 2011, Eastern Union Funding closed approximately $700 million in financing transactions. For 2012, the figure would pass $1.2 billion.

“The savings banks are very hungry for business and they’ve gotten very comfortable with where the rents are,” Bergman says. “Just about every single lender that I talk to has surpassed their expected production number” for the year.

Sansosti estimates that life insurers closed approximately $55 billion in new commercial mortgage originations last year, an increase of about 10 percent over 2011. In 2013, he says, that figure could jump to $60 billion, driven by an improving economy and low yields on alternative investment products such as corporate bonds.

As of the third quarter, banks and thrifts accounted for the largest amount of commercial/multifamily debt outstanding in the U.S. market, with 34.3 percent of the pie, or roughly $818 billion, according to the MBA. Coming in fourth after conduit lenders and government agencies, life insurers laid claim to 13.5 percent of the market, or $322 billion.

In spite of their increasing appetite for commercial real estate transactions, however, both life insurers and banks are staying conservative in their underwriting criteria.

The vast majority of life insurers have continued to stay away from tertiary markets and some are reluctant to lend on assets in secondary cities, reports Mitchell Kiffe, co-head of national production with CBRE’s debt and equity finance group. The bulk of life insurers’ commercial real estate business still comes from stabilized properties in major markets, with loan-to-value (LTV) ratios below 70 percent, though these lenders sometimes go as high as 75 percent on LTVs for prime multifamily assets, notes Steve Kohn, president of Cushman & Wakefield Sonnenblick Goldman (C&WSG), a real estate financial services firm.

Kohn adds that when estimating future cash flows, the life insurers typically come up with lower numbers than the borrowers because they underwrite for higher vacancies and higher management fees, among other things.

A recent life insurance loan on an office asset reported by C&WSG featured a fixed 3.6 percent interest rate and a 10-year term, but the LTV was set at 50 percent. Another life insurance loan, on a retail property, came with a fixed 4.1 percent rate, a 13-year term and a 30-year amortization schedule, with LTV at 60 percent.

Dave Clark of Northwestern Mutual reports a shakeup in the types of properties his firm has been financing over the past year. While in 2011 approximately 40 percent of Northwestern Mutual’s originations centered on regional malls, with multifamily and office assets coming in at 28 percent and 25 percent of the portfolio, in 2012 the breakdown was more evenly spread out over various property types. Retail represented 25 percent of new originations, office transactions accounted for 37 percent and multifamily transactions for 27 percent. The remaining loans covered the spectrum from a single hotel to manufactured housing to warehouses to mixed-use properties.

“There has been a number of high-quality, low loan-to-value office loans in central business districts that became available last year,” Clark notes regarding the shift in concentration from retail to offices. Northwestern Mutual has also originated a number of construction loans in 2012, primarily on multifamily and mixed-use projects, including a high-profile development in Boston.

While not all life insurers feel comfortable with underwriting construction projects in the current climate, over the past year banks have become more adventurous with these types of deals, in large part due to increasing competition from conduit lenders, according to Sansosti. Where there has been incentive, banks have been providing funding for value-add assets as well as construction loans for multifamily and build-to-suite office properties in strong markets, the types of transactions they mostly avoided in 2011.

For example, in early December, M&T Bank agreed to provide a $60 million construction loan for 837 Washington Street, a building containing roughly 55,000 sq. ft. of office and retail space in the meatpacking district of New York City. A joint venture of Taconic Investment Partners and Thor Equities is developing the property. HFF arranged the financing.

And in September, JP Morgan Chase was reportedly the lender behind a $170 million construction loan for the development of One Channel Center, a 500,000-sq.-ft. office building in Boston being built by AREA Property Partners and Commonwealth Ventures.

The catch is that if the deal involves a substantial level of risk, the banks now require either full or partial recourse and are keeping LTV ratios at 70 percent or lower, according to Kiffe. He notes that bank executives also remain extremely sensitive to the profiles of their borrowers. That means that construction loans might be available for publicly traded REITs with good track records but almost impossible to get for smaller, private developers.

Of the 34 banks that currently offer commercial constructions loans, according to the “2012 Survey of Credit Underwriting Practices,” released in June by the Office of the Comptroller of the Currency, U.S. Department of the Treasury, the vast majority, or 75 percent, did not change their underwriting standards since 2011. Twenty percent of the banks, however, reported tightening their underwriting criteria on commercial construction loans, while 5 percent reported easing their standards.

Of the 73 banks that offer all other kinds of commercial real estate loans, 76 percent reported unchanged underwriting standards, while 12 percent tightened lending criteria and another 12 percent eased standards.

“I think there has been good discipline and I don’t think fundamental underwriting standards have changed that much between 2011 and 2012,” says Kiffe. “What did change was a willingness to get comfortable with lower cap rates.”

As 2013 gets under way, mortgage brokers expect senior lenders’ loan portfolios to keep growing larger. Barring major political turmoil, the U.S. economy will continue to improve, leading to higher occupancy levels for commercial buildings, according to Kiffe. The yields banks and life insurance companies are able to achieve on mortgages remain more attractive than yields on corporate bonds and stocks. And the increasing volume of 10-year mortgages coming due will likely result in more robust investment sales and a greater need for acquisition financings and refinancings.

Plus, with fierce competition among the various lender groups, including Wall Street firms and government agencies, senior lenders will have to be creative to meet allocation goals.

For example, Kiffe expects to see fewer loans on multifamily assets and more office, retail and industrial transactions than in 2012. “The multifamily markets were the first to recover and that volume increased the quickest, so it will level off,” he notes.

Similarly, Sansosti expects to see an ever-increasing volume of bank loans as the lending institutions look for ways to provide returns on their customers’ money. “Lending is very likely to increase in 2013,” he says. “Over the next few years, there will be a substantial level of senior mortgages maturities, so there will be a lot of refinance activity.... I believe some banks will be more aggressive—it’s competitive, there are a lot of lenders out there and the rates are still attractive to the banks. They want to show earnings and mortgage lending is one way to achieve that.”