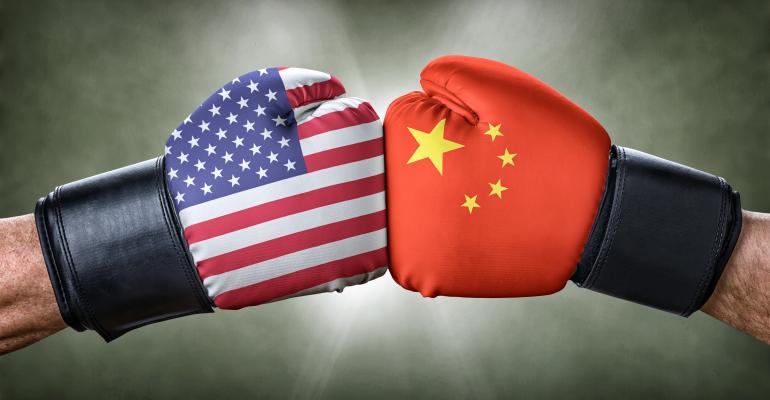 China Trade War Threat May Have Died Down, But CRE Is Still On the Front Lines

The fate of the off-again, on-again specter of an impending U.S.-China trade war may be uncertain, but regardless of what happens with tariffs and exports, the U.S. commercial real estate industry continues to feel the effect of both China’s cold shoulder and the stricter U.S. regulatory environment surrounding foreign investment.

Chinese companies and financial institutions were active in U.S. commercial real estate in recent years, both on the equity side and the debt side, but their presence seems to be waning, trade war or no trade war.

In New York City alone, Bank of China was involved with originating about $5 billion in loans for prominent commercial properties in 2013 and 2014. Bank of China has been party to loans of more than half a billion dollars each for trophy properties in the Big Apple, including the Sony Building at 550 Madison Ave. (originated in 2013), the One Astor Plaza headquarters of Viacom and its MTV studio (2012) and the 63 Madison Ave. home of tenants such as IBM (2015).

Other big Chinese players in the U.S. real estate market over the past few years have included the Industrial and Commercial Bank of China, which financed New York properties including the Bush Tower at 130 W. 42nd St. (2015), and Anbang Insurance Group, one of China’s largest insurance groups.

In 2015, Anbang acquired the world-famous Waldorf-Astoria Hotel in New York from Blackstone for $1.95 billion, and in 2016 Blackstone sold the luxury hotel portfolio Strategic Hotels & Resorts to Anbang for $6.5 billion.

But the tide has since turned, not just for Anbang, but also for Chinese involvement in U.S. real estate.

Keeping the focus on New York City for a moment, Bank of China was one of the top 10 loan originators in the Big Apple in the first quarter of 2016, but no Chinese lender made the top 10 list in any quarter of 2017, CrediFi found.

This does not seem to be an indication of a decline in appeal to foreign lenders overall, given that Germany’s Deutsche Bank was the leading New York lender in 2017 and that there have been other top foreign lenders on a quarterly basis as well. These include France’s Natixis (the No. 2 New York originator in the fourth quarter of 2017) and Kiwoom Asset Management and NongHyup Financial Group, the leading South Korean investors behind the debt fund Kiwoom Milestone US Debt Professional Private Real Estate Trust 2 (No. 9 in first quarter of 2017).

The question of what’s going on with Chinese investment is hardly limited to New York, of course.

In late 2016, the financial press began reporting that China’s government was planning to clamp down on Chinese companies investing abroad, including restrictions on state-owned companies involved in overseas real estate deals valued at $1 billion and up. The controls were instituted as part of an effort to keep more capital in the country following a 40 percent surge in China’s foreign direct investments in 2016.

In 2017, Chinese investment in the U.S. fell by 36 percent after Beijing sharpened its focus on specific sectors of the economy, saying it would limit overseas investments in real estate, hotels, entertainment and sports clubs.

Indeed, the reduction in Chinese investment has been particularly intense in the U.S. real estate industry.

“Chinese investors deployed $7.3 billion into commercial real estate acquisitions during 2017—a 55 percent decrease from 2016,” a Cushman and Wakefield report found. “As a result, China fell behind both Canada and Singapore in the ranking of largest sources of foreign capital in U.S. commercial real estate transactions.”

Anbang, so recently on the rise, has been among those hardest-hit. In February of this year, Blackstone was reported to be interested in buying back assets it had sold to Anbang, including the Waldorf and the Strategic Hotels portfolio. The same month, the Chinese government seized control of Anbang and was set to prosecute its founder, Wu Xiaohui.

In May, Wu was sentenced to 18 years in prison for financial fraud, as part of what the Financial Times termed “Beijing’s crackdown on outbound dealmaking and systemic risk.” The paper added that while the owners of Chinese conglomerates such as Dalian Wanda, HNA Group and Fosun International have not been imprisoned, they have been forced to sell assets or cut back on new overseas acquisitions.

HNA, which had $94 billion in debt at the end of 2017, told creditors it would sell about $16 billion in assets in the first half of 2018. The Chinese conglomerate was almost there by early May, due largely to the $8.5 billion sale of its stake in the Hilton chain, acquired in 2016. HNA also cut its stake in Deutsche Bank in April, after becoming the bank’s largest shareholder last year, and is selling one of its own real estate-focused subsidiaries.

There are obstacles that stem from Washington, too, not just Beijing.

The regulatory environment for foreign investment has become tougher in the U.S., with the Committee on Foreign Investment in the United States increasing its scrutiny of potential deals.

More than $8 billion in deals were abandoned last year due to concerns raised by the committee, according to estimates by New York-based research firm the Rhodium Group and the National Committee on U.S.-China Relations.

In addition to the Chinese capital controls and the greater regulatory scrutiny in the U.S., another factor affecting the relationship between China and the U.S. real estate industry is that even when Chinese investments are being made in real estate overseas, the properties in question are not necessarily on American soil.

Investors from China and other Asian countries demonstrated a preference for Europe over the U.S. in 2017 and are exhibiting an increased appetite for infrastructure and industrial properties, Ian Marcus, a senior adviser at Eastdil, said at the Israel-U.S. Real Estate Investment Conference in Tel Aviv earlier this year. He noted Blackstone’s 2017 sale of European logistics company Logicor to affiliates of the China Investment Corp. sovereign wealth fund for $14.34 billion, in what Reuters described as Europe’s biggest private equity real estate deal.

Until recently, Anbang and HNA had looked like the symbols of a China fully engaged with international finance, very much including commercial real estate. Now as China appears to be closing back up again, uncertainty appears to be the byword.

Whether the Beijing-Washington standoff escalates to a full-scale trade war or dies down, one thing real estate players should keep in mind is that China’s role in the global economy is in flux.