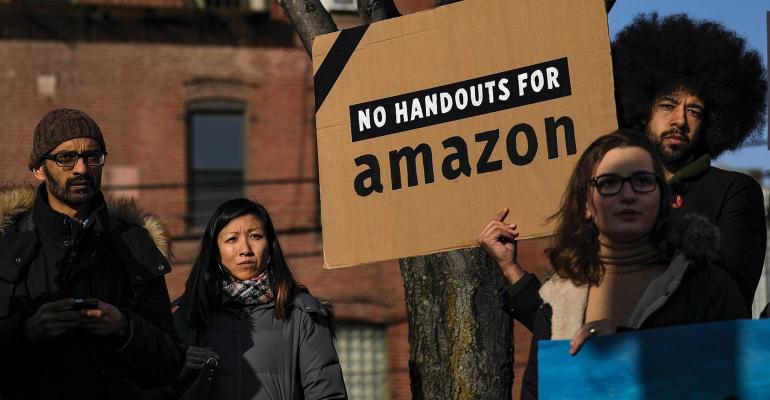 Opponents of Amazon's HQ2 deal in Arlington County want to derail its $23 million incentive package there.

Critics of HQ2, emboldened by Amazon.com Inc.'s nixed New York plans, are hoping to derail the $23 million incentive package Arlington County is weighing for the e-commerce and web services giant.

While many organizers believe the county should negotiate better terms, some hope to stop Seattle-based Amazon's move to Arlington altogether.

“The county should vote down the deal,” Roshan Abraham, an organizer with Our Revolution Arlington, said Monday during a bilingual meeting held by HQ2 opponent For Us, Not Amazon at Café Sazón on Columbia Pike.

One of the richest companies in the world does not need the county’s money, Abraham said, noting that Gov. Ralph Northam has already signed an incentive package into law that would provide Amazon (NASDAQ: AMZN) workforce cash grants of up to $550 million for creating 25,000 jobs, or $750 million for creating 37,850 jobs.

“If Amazon chooses not to come to Arlington over $23 million, good riddance,” Abraham said.

It was opposition from New York state and local politicians, spurred on by local protests, which led the online juggernaut to change its mind on the Long Island City campus. However, there is no Rep. Alexandria Ocasio-Cortez in Arlington, said Danny Cendejas, an organizer with La ColectiVA.

“They need to show the same bravery that the New York politicians showed,” Cendejas said.

A primary concern among the organizers is rising rent, which could force many in the Latino community out of their homes, said Cendejas.

Arlington County Board Chair Christian Dorsey said he expected Amazon’s Valentine’s Day breakup with New York could increase Virginians' opposition to its piece of HQ2. Dorsey said Amazon employees will trickle into the region slowly and will likely not have that huge an impact on housing costs.

“It’s tough to see how Amazon could cause prices to increase that much,” Dorsey said. “If history is any indicator, the vast majority of those working for Amazon will not live in Arlington.”

The $23 million Arlington incentive will come from the transient occupancy tax, provided Amazon meets hiring and leasing goals set by the county. It is to be paid out over 15 years.

"I know people think there are better things we can do with that money," Dorsey said. "But the money doesn't exist without the incentive."

Amazon is expected to add some 25,000 jobs to the region over 12 years with an average salary of $150,000. Crystal City should see 400 of those jobs this year and another 1,100 next year. The bulk of HQ2 will be constructed in Pentagon City.

A report by the Stephen S. Fuller Institute at George Mason University’s Schar School of Government said the additional workers would raise home prices and rents in the area marginally over the years, in a way it said would be "dispersed and gradual."

But a dueling analysis from political action group New Virginia Majority paints a bleak future for low-wage workers and renters in the area, and specifically calls Fuller’s report a “rosy scenario.”

Fuller did not respond to requests for comment about the report.

About 3,000 apartment units in Alexandria and Arlington, between South Glebe and West Glebe roads, could become unaffordable for the largely Latino community living there once Amazon moves in, according to Jon Liss, co-author of the report and director for New Virginia Majority.

The report, which was released the same day that Amazon dashed its New York plans, says that service workers who will be needed to support HQ2 in Virginia will be forced to move further out, adding to traffic.

While Liss said he would prefer Amazon not to open shop in Virginia, it’s not too late for the state and county government to do more, especially in the area of affordable housing.

“We could do better without Amazon, but the train has already left the station,” Liss said.

Organizers with For Us, Not Amazon are planning some type of demonstration for the Feb. 23 county board meeting. The board isn't expected to vote on the local incentives until March.