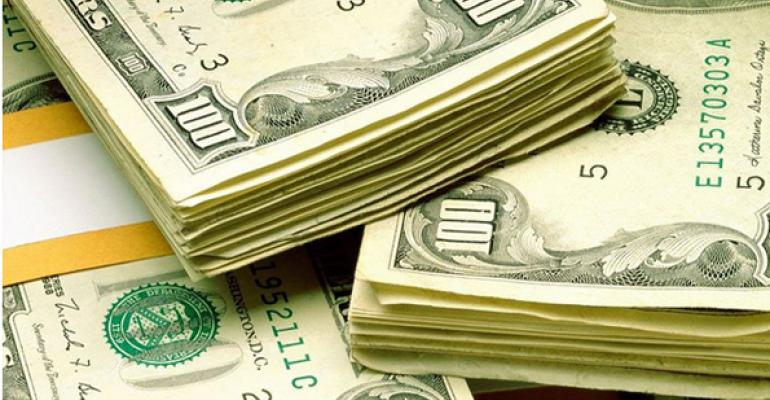 The huge drawdowns are part of what some strategists are calling a big market rotation as growth stocks and smaller companies, winners earlier this year, get pummeled.

“We have really established this new range on the 10-year,” said Victoria Fernandez, chief market strategist for Crossmark Global Investments Inc., who expects 10-year Treasury yields to stay around the 3.25 percent level. “Everyone’s trying to figure out how they want to be positioned for this.”

The $18.3 billion iShares Russell 1000 ETF, ticker IWB, saw $2.7 billion pulled from the fund Monday, the largest outflow in its 18-year existence, amounting to a loss of more than 12 percent of its assets. The ETF tracks the performance of the Russell 1000 Index, which includes the largest 1000 companies in the Russell 3000 Index.

The fund’s outflow looked like it was driven by one large investor, according to Josh Lukeman, head of ETF market making for the Americas at Credit Suisse Group AG. The block trades didn’t seem to show up in the print until about 8:10 a.m. Tuesday in New York, when three blocks of about 5.5 million shares each hit the tape one after another.

“A lot of volume trades on the close, so given the fund is mostly U.S. large caps, that’s going to be the best point for liquidity,” Lukeman said.

The FANG cohort of high-flying growth stocks are all top-10 holdings in the fund. Together, Apple Inc., Microsoft Corp., Amazon.com Inc., Facebook Inc., and Alphabet Inc. make up nearly 15 percent of the ETF. That’s been a drag as the tech stocks have languished in the wake of rising rates.

The run-up in yields has pushed ETF investors to flee typical bond proxies. The iShares Cohen & Steers REIT ETF, or ICF, saw its biggest outflow ever Monday, losing more than $464 million. The outflow reduced the fund’s assets by 19 percent. The iShares U.S. Real Estate ETF, or IYR, lost $87 million on Monday following a week of record outflows that totaled more than $834 million. It’s already on pace this month to lose the most since April 2015.

“The real estate sector has sold off to start October, as investors have sold out of high-dividend yielding bond proxies,” said Todd Rosenbluth, director of ETF research at CFRA Research. “Further, the large-cap REITs that are well-represented in these ETFs are expected to generate below-average earnings in the second half of the year.”

The Vanguard Tax-Exempt Bond ETF, or VTEB, is the market’s third-largest fund tracking municipal bonds. It got hit with a massive outflow of over $25 million on Monday, the biggest since the $3.6 billion fund launched in 2015. Investors also yanked record cash from BlackRock’s $9.5 billion iShares National Muni Bond ETF, the largest muni ETF, last week. State and local debt has posted a nearly 1 percent loss this year after mounting fears over rising interest rates prompted a sell-off last week.