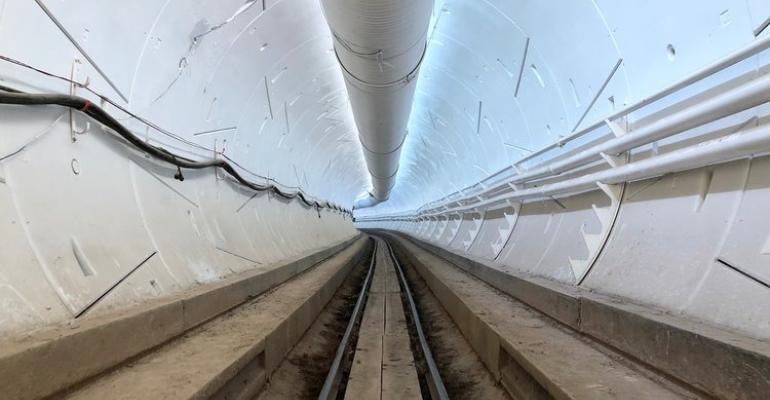 What Happens When Elon Musk’s Tunnel Comes to Town

Elon Musk’s Boring Co. is buying up properties in Los Angeles County for its tunnel plans and impacting local tenants.

(Bloomberg)—This year, Los Vegas Kitchen Cabinets in Hawthorne, California, got a surprise letter: The property where they had conducted business for roughly 20 years had been sold, and the new landlord wanted them out. The twist? The new landlord was an entity connected to Elon Musk’s Boring Co., and the cabinet business needed to make way for a test hyperloop tunnel.

Musk’s plans to tunnel underneath Los Angeles County have been greeted with much fanfare and much hand-wringing by existing residents, some of whom will be directly impacted by the tunneling and construction. On Tuesday night, Boring Co. will officially open the Hawthorne tunnel, a preview of Musk’s larger vision to ease L.A. traffic. As part of that project, the company has also purchased property near the test site—much to the chagrin of some local businesses.

A Boring Co. spokesman said the company strives to be a good neighbor, and that it gave the cabinet store a two-month extension on its lease. Los Vegas—so named because it’s run by the Vega family, and translates from Spanish to “the Vegas”—signed a lease on a new storefront about 10 minutes away from its previous location. But the business’s new rent is $10,000 a month, about double what it previously paid, said manager Adrian Vega. It’s one of a small handful of enterprises near Musk’s test site that say they were affected by the project—some by Boring Co. trucks blocking thoroughfares, or in the case of Los Vegas, by displacement.

The company said that it has made sure its presence in Hawthorne isn’t burdensome for residents and business owners. “The truth is that we have caused effectively no disruption to the Hawthorne community,” a spokesman said. “Compare this to any other construction project and that is obvious.” He added that the underground nature of the project makes it particularly unobtrusive. As for any traffic related to the tunnel, the spokesman said the company had apologized to a tire shop that had been affected, adding “they have been kind and welcoming neighbors.”

Records at the Los Angeles County Assessor’s office show that two plots of land, and the former site of Los Vegas Kitchen Cabinets, were purchased for $1.9 million in May by an entity connected to Musk. One had previously sold in 1988 for $190,000, while the second had previously sold in 1989 for $342,000. They’re near Boring Co.’s test tunnel, which starts a mile east in a former parking lot at Space Exploration Technologies Corp., the rocket company also owned by Musk, and runs underneath 120th Street in Hawthorne.

Now, about 40 feet underneath where the shop once operated, the Boring Co. has completed a massive underground tunnel. Last month, Musk posted a video taken there in a tweet, writing, “Boring Company just broke through the other side!!”

Vega’s reaction to the tunnel’s completion was less upbeat. “It’s tough,” he said. Los Vegas has lost several months’ worth of income, and Vega is still waiting for permits for the new shop in the nearby town of Gardena. “It makes me sad,” he said. Vega hopes to reopen his shop by month’s end.

It’s common for major infrastructure projects to ruffle feathers and displace some tenants. But the small businesses’ plights underscore the sweeping impact of the tech industry’s disruptive innovations, particularly when they begin to cross over from software and into streeetscapes.

The Hawthorne parcels are not the only property Boring Co. has bought as part of its plan to build new transportation networks, and are unlikely to be the last. On Feb. 1 another entity connected to Musk spent $4.6 million for a property a few miles north, on the site of a separate Boring Co. tunneling project, a planned north-south test leg along Sepulveda Boulevard. But the project was ditched last month, after neighbors complained about the environmental review process.

The cancellation came too late to spare one existing tenant, though. After buying the land, the property’s new owner asked a firewood shop to move out by March 31. A Boring Co. spokesman noted that the firewood business was on a month-to-month lease. Tim Rettig, the owner of Whitt’s Wood Yard, relocated nearby and now pays more than three times the $5,000 rent, including insurance and taxes, that he had paid at the old site.

“It’s killing me,” Rettig said. “I don’t know how I’m in business.” His situation was made worse by the devastating wildfires in California, which made customers less inclined to burn firewood. He said he plans to reevaluate Whitt’s viability next year.

Another tenant was a welding shop whose owner, Rick Eckhart, was also the owner of the property. The welding shop closed, but the related Eckharts Trailer Hitch & Welding shops operate in other Los Angeles-area locations. Eckhart did not respond to an emailed message for comment. He had bought the plot four years ago for about $3 million less than the Boring Co.-related company paid for it.

As for what happens with the land now, local real estate trends don’t appear favorable to Musk’s prospects for renting or selling it. In that section of Los Angeles's Olympic Corridor neighborhood, rents have gone up slower than in other parts of the city. "There's a bleak outlook for this [retail] asset class in the area," said Vincent Chang, associate market director for research at real estate firm Cushman & Wakefield.

The Boring Co. also bought at least one more property connected to its Los Angeles tunneling plans. In January, it spent $485,000 for a house one block north of its test tunnel.

According to documents filed with Hawthorne’s City Council, Boring Co. plans to demolish the residence’s existing garage and build a larger replacement, complete with an elevator built to descend to the level of the tunnel. Boring Co. plans to use the facility to gauge the viability of moving different types of vehicles onto the large, movable skates it will use within the tunnel itself.

It wasn’t clear if anyone currently lives in the home. (No residents could be reached for comment.) But the existing house is slated to get some Boring Co.-bankrolled perks, according to the documents. The garage will be gone, but the modest stucco building now has a new paint job, and is getting drought-tolerant landscaping as part of the deal.

To contact the author of this story: Sarah McBride in San Francisco at [email protected]