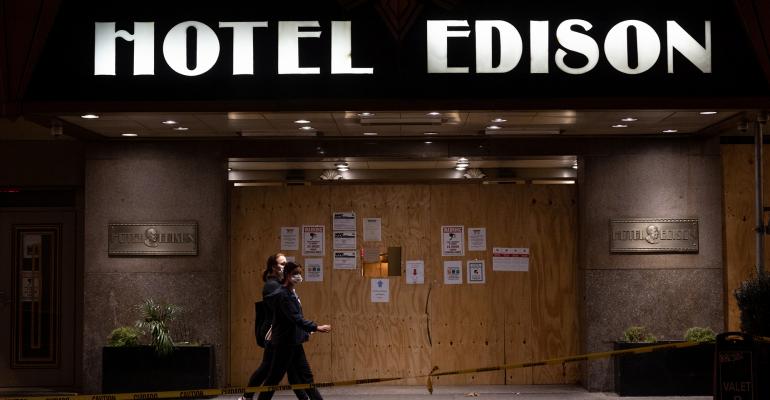 With vaccinations beginning, existing owners of struggling hotel properties are making a renewed effort to wait out the pandemic rather than sell for deep discounts.

Investors have stashed away billions of dollars to buy hotel properties hurt by the economic chaos caused by the coronavirus. But that money is not being spent.

Even though the coronavirus continues to rage across the U.S., sellers are holding on to their properties. Lenders have been surprisingly generous with forbearance. And many current property owners are spending make debt service payments and keep their properties out of foreclosure.

“With the distribution of a nationwide vaccine… sellers and lenders are preparing to ‘hold on’ a bit longer,” says Skyler Cooper, regional manager and national director of the hospitality division for Marcus & Millichap.

That must be a huge disappointed for potential buyers that amassed large war chests and hoped to buy at deep discounts.

Investors continue to spend a fraction of what they used to spend to buy hotel properties. Investors paid $600 million to buy hotel properties in October 2020, according to Real Capital Analytics (RCA). That’s down 84 percent from the volume of sales a year before. But for the few properties that sold, prices were just 3.9 percent less than a year ago on average—despite the huge drop in demand for hotel rooms caused by the pandemic.

“There is a large pool of prospective buyers—but there is an expectation gap,” says Cooper.

Just 44.2 percent of hotel rooms were occupied in the third quarter of 2020—and that terrible number is expected to drop to 41.5 percent in the fourth quarter as the hundreds of thousands of new coronavirus infections are diagnosed every day and states continue to impose new restrictions to slow the spread of the disease, according to CoStar Group.

Hotel owners depend on the kindness of lenders

At in the first months of the pandemic, many investors thought low occupancy rates would force many owners to give hotel properties to lenders.

“Everybody in New York was putting together capital to make these acquisitions,” says Lee Hunter, COO of Hunter Hotel Advisors, based in Atlanta.

Many of these potential buyers are private investors who have raised large funds through their personal relationships and networks, says Cooper. In addition, private equity funds and institutional investors have gathered billions of dollars to buy distressed hotels. “Many of these funds are securing equity from sources that traditionally invest in other sectors both within and from outside the commercial real estate space,” says Cooper.

However, most of these potential buyers have been unable so far to make find properties available to buy at the discounts they expected. “Those distressed assets never really materialized,” says Lee.

Many lenders have given hotel owners extra time and forbearance. Balance sheet lenders like banks let many hotel borrowers to go three month without making any debt service payments at the beginning of the pandemic and another three months of interest-only payments, says Lee, describing a typical forbearance arrangement. Many of bank borrowers did not have to make full debt service payments until October or even November.

CMBS lenders have less ability to let borrowers fall behind in payments without taking action. Special servicers are bound by the pooling and servicing agreements they have with the investors who bought bonds secured by the hotel properties. “Those contracts do not allow for a lot of forbearance,” says Lee.

However, even CMBS lenders have not seized many hotel properties. Most of those have been properties that were already struggling before the pandemic, says Lee. If a hotel property seems like to regain its lost value, the both owners and CMBS special services seem to be motivated to keep the deal out of foreclosure.

For hotels that are not producing enough income, some owners are using their own funds to make payments, in hopes that the properties will operate in the black again in 2021.

“The borrowers have been willing to reach into to their own pockets to pay the debt service,” says Lee. “These pockets are deep – if they want to keep paying out of pocket, they can.”

Of course, many property owners are struggling to make up for the reduced income at their hotel properties. But many potential buyers are also under pressure. “A lot of people raised money,” says Cooper. They are going to be under pressure to get that money invested, buying hotels at a 20 percent discount, even if they expected a 40 percent discount when they raised the money.

“When assets become available, there are usually several bidders, which is setting a stronger than anticipated floor on values,” says Cooper. “How much does that equity need to be invested? How much does that seller need to sell?”