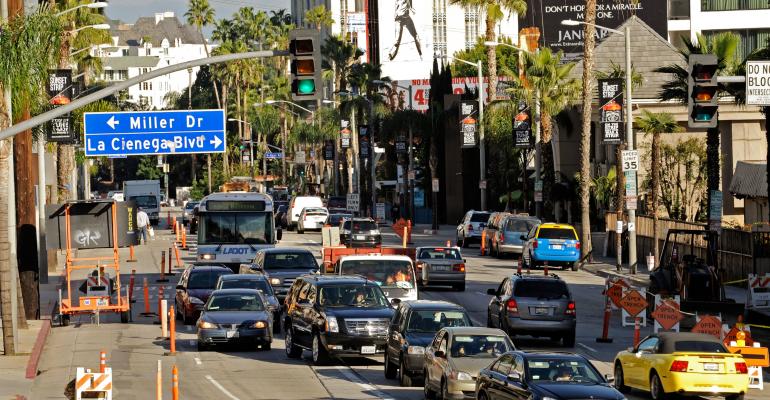 Sunset Strip Scrubs Its Seedy Rock Past With $450 Million Hotel

AECOM Capital and Combined Properties revealed the details of their $450 million hotel-and-condo project on the Sunset Strip.

(Bloomberg)—For decades, the Sunset Strip was known for its rock clubs and celebrity hot spots. Now, the once-gritty stretch of boulevard is becoming better known for its luxury hotels.

Real estate developers AECOM Capital and Combined Properties Inc. provided a fresh glimpse of the future of the section of Sunset Boulevard that runs through West Hollywood, California, by unveiling new details of a $450 million hotel-and-condo project they’re building where the House of Blues once stood. Called the Pendry West Hollywood, the project has 149 guest rooms, 40 branded residences and a small music venue that nods to the property’s history.

“People in finance and tech and real estate, the traditional businesses that stay with us and stay at luxury hotels, we think we’ll pull them to West Hollywood,” said Michael Fuerstman, who co-founded operator Pendry Hotels with his father, Alan. “We think it’s a big opportunity.”

He isn’t the only one. The Pendry is slated to open next year, when it will join a crowd of newly built or freshly renovated hotels along Sunset Boulevard. They include the conversion of an existing property into a new location for 1 Hotels, the eco-friendly boutique brand from Starwood Capital Group Chairman Barry Sternlicht, while developer Steve Witkoff is opening a Marriott Edition at the other end of the Sunset Strip.

There are five more projects in various stages of planning in the West Hollywood portion of Sunset Boulevard alone, including a futuristic hotel tower on the site of the former Viper Room, the nightclub where actor River Phoenix died of a drug overdose in 1993.

“Are we building too many?” asked Alan Reay, president of marketing company Atlas Hospitality Group, which compiled the neighborhood development data. “Only time will tell. Historically, developers seem to have done that over and over again.”

Sunset Boulevard has had high-profile hotels before, including the Hyatt Hotels Corp. property sometimes called the Riot House, where members of Led Zeppelin, the Rolling Stones and the Who were rumored to have tossed the occasional television from a window or ridden a motorcycle down a hallway.

Development stalled following the global financial crisis as lenders pulled financing and investors focused on buying existing properties. The supply of luxury hotel rooms has increased by a paltry 1 percent since 2012 in the Los Angeles submarket encompassing the Pendry, while the average daily room rate has grown 33 percent to $429 over the same period, according to lodging-data provider STR.

The seeds of the Pendry project predate the Great Recession. Combined Properties, led by Chairman Ronald Haft, took control of the property in 2005, and began the long process of lining up local approvals. AECOM Capital, the investment arm of global engineering firm AECOM, bought into the project in 2014, providing financing and construction expertise. The partners then signed a deal with Montage International, the Laguna Beach, California-based company whose Pendry brand was designed to reflect a fresh approach to luxury.

The developers say the competition from other new high-end hotels will be good for business.

“The critical mass of really creating Sunset as a luxury destination helps drive rates up,” said Warren Wachsberger, a managing director at AECOM Capital. “You’re really in a position where you can get the rate necessary to build a product like this.”