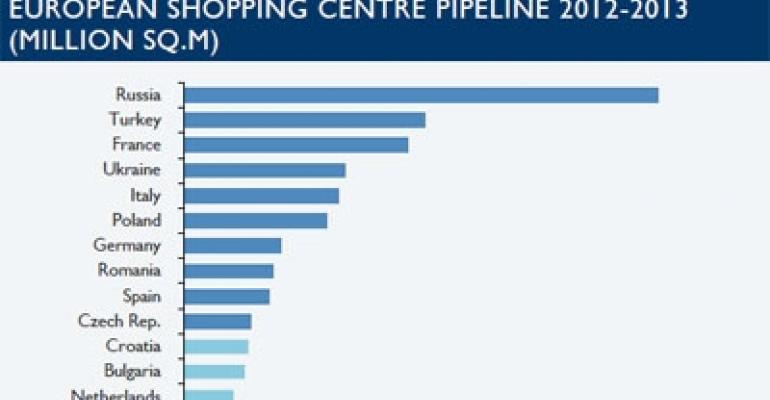 Despite an economic and financial crisis that continues to batter the continent and send ripple effects around the globe, some segments of the European retail market are proving to be surprisingly resilient.

The broader retail market has been buffeted by strong headwinds that have produced crashing values, lack of financing and rising vacancies across much of Europe. “We are still in very difficult economic times,” says James Dolphin, head of Pan-EMEA Retail at Jones Lang LaSalle in London. Countries such as Greece, Portugal, Spain and Ireland have been especially hard hit during the recession as the economies in those countries have struggled.

Yet Europe also has benefited from its diversity and a flight to safety among retailers that has fueled demand for top locations. “From a retailing perspective, our prime markets have held up very well throughout the recession,” says Dolphin.

Moscow saw the biggest increases in high street rents in first quarter with an 11.1 percent spike, followed by Paris at 6.7 percent, according to Jones Lang LaSalle.

Secondary locations across Europe are significantly weaker due to lower retailer demand. For example, year-over-year prime shopping center rents dropped significantly in both Madrid and Barcelona at the end of first quarter down 13.3 percent and 10 percent respectively, according to Jones Lang LaSalle.

“Western European markets, including the U.K., have held up reasonably well at the level of the major towns and cities and better shopping malls,” agrees John Strachan, global head of retail at Cushman & Wakefield in London. “Those major city streets, particularly the luxury streets, didn’t suffer at all during the recession.” The other bright spot during the recession has been factory outlets, which have continued to thrive in terms of sales and retailer demand.

“Once you leave that top 10 percent to 15 percent of the market and look at smaller towns―particularly tier three and tier four towns and shopping malls―life is very, very different and very difficult,” says Strachan. Some small malls and towns are seeing vacancy rates climb up to 25 percent and rents have fallen up to 50 percent. There is very little trading in capital markets in those areas. “So, it really is a world of two halves,” he adds.

Given the persistent challenges, it is no surprise that new development remains limited, particularly in Western Europe. There is hardly any new construction planned in Western Europe. For example, there is only one major shopping center underway in the U.K. Land Securities is building the 818,000-sq.-ft. Trinity Leeds shopping center in Leeds that is slated for completion in spring 2013.

Roughly 63.5 million sq. ft. of new space was built across all of Europe in 2011 and an additional 68.4 million sq. ft. is scheduled for completion this year. The bulk of that activity is occurring in Russia, with notable hotspots of activity also occurring in Turkey, Poland, the Ukraine and France.

Russia pulled out of its recession very quickly and now has a sizable development pipeline of new retail projects, including the 1.75-million-sq.-ft. OZ Mall in Krasnodar that will be completed this year. “The biggest pipeline and the most active market is Turkey, where there is talk of 50 or 60 new shopping centers,” says Strachan. One project currently underway is the 1.08-million-sq.-ft. Marmara Park in Istanbul.

“Where a lot of Europe has shown decline, the Turkish market has grown massively,” agrees Dolphin. Turkey, which has a large, affluent population, had relatively little modern shopping malls until just a few years ago. So, supply is working to catch up with the growing demand.

Much like the development capital, investment capital also is flowing to Eastern European countries such as Turkey and Poland. Investors also favor markets that are exhibiting greater stability such as Germany and Sweden. That being said, investment activity is still well off peak levels. Investment sales fell to €4.6 billion in first quarter, which is 64 percent lower compared to activity in first quarter 2011, according to CBRE.

Europe is a diverse market, and clearly some countries are weathering the economic turbulence better than others. Uncertainty and lack of consumer confidence continue to drag on the overall market recovery. However, it is promising that forward thinking retailers and developers are already thinking and planning for the future. “Retailers need to be more savvy in offering something new, and we are starting to see that,” says Dolphin. “Shopping mall owners also need to be in tune with that to create better shopping center environments.”

An overview of the situation in the entire market will be the subject of the Pan-European Overview of Retail and Shopping Centers panel at the ICSC Retail Real Estate World Summit.