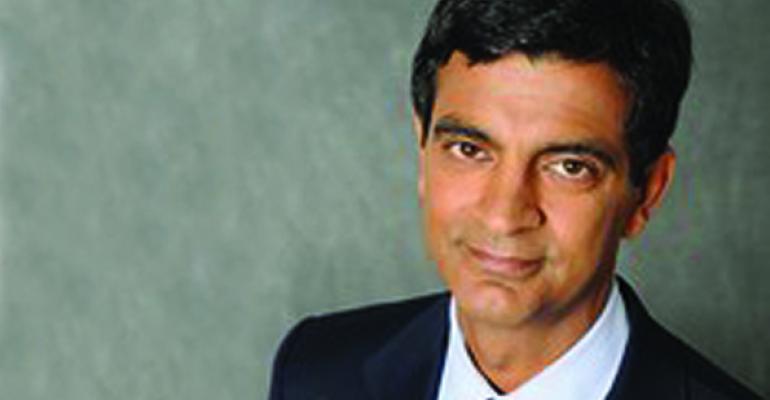 Retail real estate, like most other industries, is being profoundly transformed by the process of globalization. Retailers are increasingly crossing borders and competing on the international stage. Developers too are diversifying portfolios and increasingly becoming international operators, forging relationships with tenants that cross the globe.

To grapple with the ramifications of this, ICSC will be hosting the Retail Real Estate World Summit from September 11 through 14 in Shanghai, China.

Sandeep Mathrani, CEO of General Growth Properties and an ICSC Trustee, is co-chair of the summit. Mathrani sat down with Retail Traffic to discuss the conference as well as the major trends shaping how retailers and developers are operating globally.

Retail Traffic: What is the background of the Retail Real Estate World Summit? What did the previous Summits accomplish?

You have investors who are going cross-border, like China Investment Corp., which holds a stake in GGP. It’s good to move these meetings around the world so that we can provide appropriate exposure to the industry from different parts of the world as opposed to just doing it in the U.S. It’s no longer a localized business.

RT: What are the goals for this summit?

Mathrani: I guess there will be two goals—one is for ICSC to truly be an international organization. And two, to further encourage these cross-border relationships. Very often you don’t have people in local markets who travel long distances to see what’s going on [in other parts of the world]. So it’s good for organizations like ICSC to bring Americans into China, or Russians into China, or Australians into China, for them to meet and interact with their Chinese counterparts.

RT: What are the key trends or cutting issues that will be discussed at the Summit?

This is a global industry. What goes on in Europe affects what is going on in Asia. We have some very high level speakers who are going to be talking about what’s going on globally: for example, Brian Mulroney, the former prime minister of Canada, will be speaking about global politics.

The second aspect [of the program] will be talking about retail and global retail trends. What works in Japan—should it be working in America? How do retailers see the global environment? And we will also hear from companies that have actually gone global, like Wal-Mart: how they succeeded around the world. So we have a whole section dedicated to retail.

And the last aspect—what are the best practices? As we go cross-border, it would be good to have some standardization in the industry. Hopefully, we’ll all benefit from [adapting] best practices around the world. So essentially there are four aspects to it: macroeconomic conditions, retailing around the world, retail real estate investment and development and best practices.

RT: What kinds of people are you hoping will attend the Summit?

Mathrani: We would like to [see] more senior level people, for them to be much more decision-makers, so they can encourage their organizations to take it to the next step.

RT: What are the biggest challenges facing the retail real estate industry globally?

Mathrani: I think that the challenge is, quite honestly, the ability of people to take the leap of faith and travel and have the desire to invest [overseas]. There is always fear and a summit like that is supposed to break down that fear factor. A lot of retailers are afraid and I think that we live in a global economy and we need to operate globally. The biggest challenge is internal and it’s focused on fear.

RT: How is the industry evolving in the face of increasingly globalized economic trends?

Mathrani: I don’t think it’s a retailer or landlord situation; it’s a factor of global economy. We’ve opened our borders, we live in a global economy. Individual countries can do different things to combat it better, so it’s more about fiscal policy. I don’t think an individual owner can do much. Of course, as Warren Buffet has said, leverage kills everyone. So if you want to be protected, be a highly unlevered company.

RT: How is the industry evolving in the face of technological advances? How are smartphones and tablets changing the in-person shopping experience and how retail real estate centers are configured?

Mathrani: I think there are two schools of thought. Obviously, the Internet is definitely going to have an impact on retail sales. I think it impacts certain categories more than others: it has already affected the book industry, the music industry. I think fast fashion will be the last to be impacted.

I don’t think bricks and mortar retailers will go away, but their [physical] store growth will be limited, they will not grow their footprints as fast as they have in the past, and I think they will become a lot more [reliant on the] omni-channel [model]. They’ve learned how to be omni-channel and get to the customer. The Internet can always be viewed as a threat, but it can also be used to sell creatively. It will prevent future over-building in our industry.

Look at the example of the Missoni line at Target. [There were so many customers trying to buy products online the website crashed]. But if you gave [Target] the location of where you were, they directed you to the store that still had that merchandise, even though on the Internet you can no longer buy it. Retailers have a tremendous interest in bricks-and-mortar, they are going to figure it out. The best example of that is Amazon is opening five stores right now in the Seattle market.

[In terms of shopping centers], I think what you are going to see is yes, maybe the footprint of the stores might get smaller, but I don’t think the layout is going to alter.

RT: How is the industry changing in response to demographic trends and shifts in population?

Mathrani: As a matter of fact the mall business, where GGP’s main focus is, is still a place for entertainment. It’s an American pastime. If you look at the younger generation, I have a 14-year-old son who wanted something from Abercrombie & Fitch and still went to the actual store. And he’s a boy. Girls would do that more. And during retailer promotions when the stores open at midnight, the customers who are there between midnight and four a.m. are usually the younger set. So the stores are learning how to bring the younger generation back into the mall.

RT: Malls and shopping centers are associated with the United States, but have now spread globally. How has the format evolved as it has become more international? Are there lessons that developers have learned overseas that could be applied within the U.S.?

Mathrani: Yes, for sure, we have stuff to learn. Look at what Dubai has done to the shopping center industry. It’s fun, they’ve added entertainment. You go there and see great local retailers and color and excitement. You go to Australia and see supermarkets at malls. Should we be adding supermarkets to our malls? Yes. So yes, we are seeing trends in the rest of the world that we would try to emulate here. Just as other countries try to emulate the American mall.