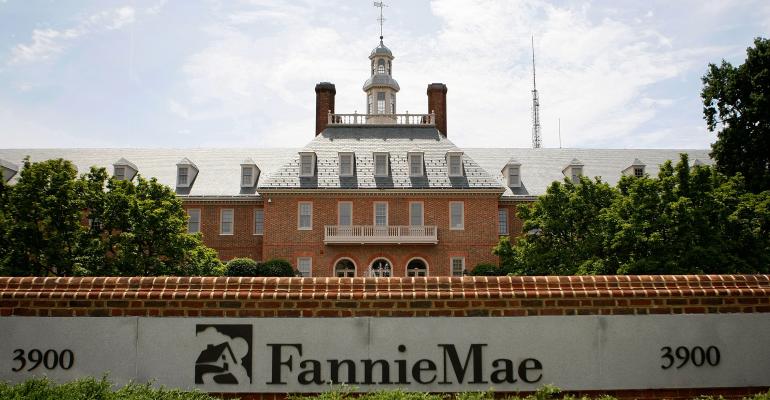 More work needs to be done to fix the two mortgage giants at the heart of the U.S. housing-finance system, Mnuchin said Thursday.

(Bloomberg)—Treasury Secretary Steven Mnuchin said plans for overhauling Fannie Mae and Freddie Mac won’t be addressed until next year, adding that he expects the companies to continue turning over their profits to the government.

More work needs to be done to fix the two mortgage giants at the heart of the U.S. housing-finance system, Mnuchin said Thursday at a Politico conference in Washington. The companies aren’t yet in a position to be released from government control, he said.

“We need to fix Fannie and Freddie,” he said. “Realistically this is a 2018 issue, but we’re going to fix it and when we fix it we want to make sure we never put the taxpayers at risk.”

Shares of Fannie and Freddie jumped as much as 16 percent Thursday after six Democratic senators sent letters to Mnuchin and Federal Housing Finance Agency Director Mel Watt, urging them to allow the companies to retain some of their profits to protect against losses.

Analysts said that the shares also rose because of a recently passed resolution by the Republican National Committee, which said the claims of private Fannie and Freddie investors should be resolved “in a manner that honors and respects the rule of law governing the rights of corporate stockowners.”

Hedge funds and other investors who own Fannie and Freddie shares have fought for years to secure a portion of the companies’ profits, which now all flow to the U.S. Treasury. Firms including Fairholme Funds Inc., Paulson & Co. and Perry Capital have sued the government or funded lobbying campaigns in an attempt to change the policy.

The government took control of Fannie and Freddie in 2008, eventually injecting them with more than $187 billion during the financial crisis. The terms of the bailout originally called for a 10 percent dividend, but in 2012 the government changed them to sweep nearly all of the profits when they made one. The companies have since paid the government more than $270 billion in dividends.

The 2012 change also required Fannie and Freddie to wind down their capital buffers until they reached zero dollars next year. Shareholders sued after the change, though the courts that have ruled so far have largely dismissed their claims.

The Democratic lawmakers’ Wednesday letter focused narrowly on allowing Fannie and Freddie to retain a capital buffer. Six members of the Senate Banking Committee said that Watt, who oversees the companies as FHFA director, and Mnuchin should let them stop paying all of their profits to the Treasury in order to build capital.

The lawmakers wrote that they didn’t believe Fannie and Freddie should be released from conservatorship without further reforms. Still, some shareholders see rebuilding capital as a necessary first step to the companies exiting government control.

Mnuchin, who spoke at the conference after markets closed, said he wanted the dividend payments to continue.

“We expect our dividends to be paid,” Mnuchin said.

The Republican National Committee’s resolution went further than what the Democratic lawmakers are seeking. In addition to calling on policy makers to allow the companies to keep capital, the RNC said it “recognizes the sanctity of property rights in America, and acknowledges the need to resolve the outstanding claims of Fannie Mae and Freddie Mac shareholders in a manner that honors and respects the rule of law government the rights of corporate stock owners.”

Blackstone Group LP Chief Executive Officer Stephen Schwarzman -- whose firm owns shares of Fannie and Freddie -- as well as John Paulson and Fairholme’s Bruce Berkowitz were large donors to the Republican Party and GOP lawmakers during the last election cycle.

There were elements of the RNC resolution that were similar to language used by financial firms backed by Fannie and Freddie shareholders.

For instance, the last line of the RNC proposal called for “administrative action that restores safety and soundness to Fannie Mae and Freddie Mac.” In June, Moelis & Co. released a report funded in part by Blackstone and Paulson titled “Blueprint for Restoring Safety and Soundness to the GSEs.”

The RNC resolution stands out from its previous positions, which blamed Fannie and Freddie for the 2008 financial crisis and called for most of the mortgage market to be privatized without government support.

RNC resolutions, such as the one passed on Fannie and Freddie, shouldn’t be interpreted as changes in official GOP policy, a spokeswoman for the committee said. The GOP party platform, which calls for the role of Fannie and Freddie to be reexamined, takes precedence over any resolution, and lawmakers are only people who write policy, she said.

So far, few GOP lawmakers have expressed public support for preserving Fannie and Freddie in their current state, and both Republican and Democratic lawmakers have worked on legislation to significantly change the housing-finance system. Trump officials have said they are working with lawmakers, and FHFA officials have said they wouldn’t support releasing the companies from conservatorship without legislation even if Trump wanted to do that.

It’s unclear what, if any, impact the RNC resolution would have on those efforts. Some House and Senate Republican staffers said they hadn’t heard of the resolution and weren’t aware of any changes in the policy position of their bosses.

“Neither of these developments are seismic, but both are substantive,” Isaac Boltansky, an analyst for Compass Point Research & Trading, said in a research note.