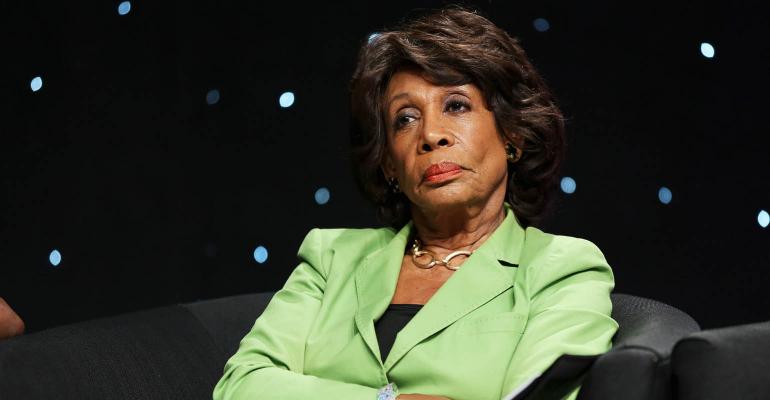 Lawmakers have wrestled over what to do with Fannie and Freddie since the mortgage-finance giants were taken under U.S. control as credit markets collapsed in 2008.

(Bloomberg)—Representative Maxine Waters said fixing Fannie Mae and Freddie Mac would top her list of priorities if Democrats take control of the House in this year’s mid-term elections and she becomes leader of the Financial Services Committee next year.

Housing-finance reform is “very important to me,” the California lawmaker said in response to a question Wednesday at a CNBC Capital Exchange event in Washington. Waters, the top Democrat on the powerful House panel, would be in line to take the chairmanship if Republicans are swept out of power.

Lawmakers have wrestled over what to do with Fannie and Freddie since the mortgage-finance giants were taken under U.S. control as credit markets collapsed in 2008. Waters has criticized Representative Jeb Hensarling, the Texas Republican who currently leads the Financial Services Committee, for failing to move away from his proposal to severely limit the government’s role in the mortgage market. She didn’t offer details about how she’d address housing-finance reform.

Another priority, Waters said, would be “undoing” all the harm Mick Mulvaney has done as acting director of the Consumer Financial Protection Bureau. And she said she’d also make a point of holding top executives of the biggest banks accountable for the harm their companies do to customers.

“We have to pay attention to the biggest U.S. banks,” she said.

Even though the midterms are still months away, Wall Street and Republicans on Capitol Hill are fretting about the possibility of Waters taking over the Financial Services Committee. The 13-term California Democrat supports stiffer rules on big banks and opponents are concerned that she would use her subpoena power to dig up dirt on companies she’s chastised, like Wells Fargo & Co. and Deutsche Bank AG.