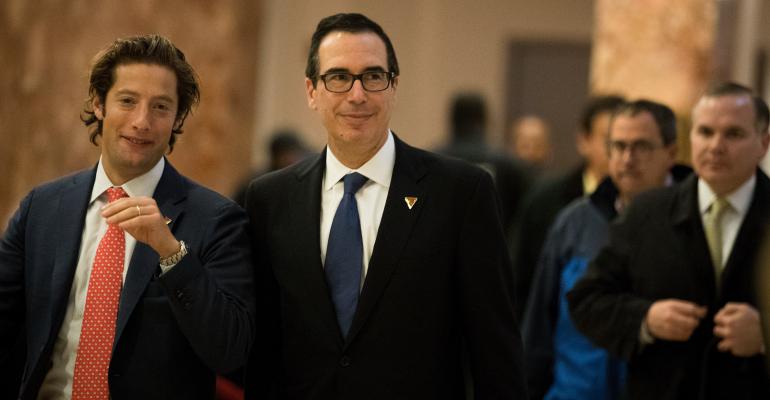 (Bloomberg View)—Donald Trump's nominee for Treasury secretary, Steven Mnuchin, has said that he wants to put the U.S. mortgage market back into private hands -- and do it "reasonably fast." He'll have his work cut out for him.

Mortgage behemoths Fannie Mae and Freddie Mac represent a big piece of unfinished business left over from the financial crisis. The companies, which purchase and guarantee home loans, used to have a business model similar to the largest U.S. banks: They generated abundant profits for shareholders thanks in large part to low borrowing costs, which in turn depended on the assumption that the government would bail them out if they got into trouble. That bailout became necessary in 2008. Unlike the banks, though, they have been wards of the state ever since.

Judging from his comments, Mnuchin's solution would be to bring in private investors and ensure they provide ample capital (or other payments) to cover any losses. Logical as that may seem, it's more easily said than done. The government's role in the mortgage market has been expanding ever since the late 1960s, when Fannie Mae was reorganized into a company owned by shareholders but with implicit taxpayer backing. The private subprime lending boom of the 2000s was a brief and disastrous exception. As of September, federal entities -- largely Fannie and Freddie -- owned or guaranteed some $6.3 trillion in home mortgages, or 61 percent of the total outstanding. Here's how that looks:

Whether that level of government involvement is desirable depends on how you look at it. Much of the mortgage and housing market as we know it depends on the government's backing. It has made the 30-year, fixed-rate home loan possible, and kept lending going at times when private investors were heading for the exits. It's the reason home ownership is accessible to large swathes of the American public at the lower end of the income distribution.

On the other hand, mounting debt burdens have made U.S. households more vulnerable to crises, and have presented a major obstacle to economic recovery. Eight years after the 2008 debacle, more than 3 million homeowners still owe more on their mortgages than their homes are worth. Encouraging people to make leveraged investments in real estate isn't necessarily the best way to run an economy.

Yet even if getting the government out is ultimately the right move, it's important to recognize how far the U.S. has already gone in the other direction. True privatization would be a big shock, potentially leaving millions of Americans unable to buy or refinance homes. Anything short could end up merely redirecting subsidies to banks or other private investors. For all its drawbacks, the government control of Fannie and Freddie at least has the advantage of clarity: Taxpayers are on the hook for losses but also benefit from the upside.

Privatizing the American dream is a fraught enterprise. If Mnuchin wants to protect the interests of the working-class voters who helped bring Trump to power, he will have to tread carefully.

Mark Whitehouse writes editorials on global economics and finance for Bloomberg View. He covered economics for the Wall Street Journal and served as deputy bureau chief in London. He was previously the founding managing editor of Vedomosti, a Russian-language business daily.