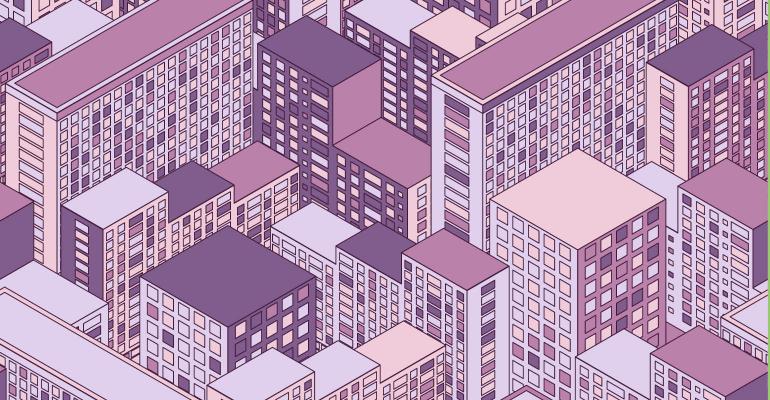 Capital is continuing to flow to the multifamily sector. Despite concerns that the real estate cycle is peaking—and with high levels of multifamily construction in some metros—fundamentals have steadily improved and investment sales remain robust. Exclusive research conducted by NREI indicates that the market is likely to stay that course for at least another 12 months.

Apartments remain a favored property type among commercial real estate investors. When asked to rate the attractiveness of the different core property types on a scale of 1 to 10, survey respondents scored multifamily the highest at 7.9, but the score on industrial properties continues to gain ground. It now stands at 7.5. Hotels and office assets both scored at 5.9, while retail’s score has crashed to 4.5.

The outlook for investment

Only 18.5 percent expect a decrease (down from 24.9 percent). Additionally, 19.6 percent of respondents said cap rates would remain flat.

Through the first three quarters of 2017, apartment investment sales volume totaled $103.9 billion, according to RCA, down 9 percent compared to the same period in 2016.

Usually prices fall when transaction activity slows down. But strong rent growth and relatively healthy occupancy rates in the apartment sector continue to attract investors, who are then frustrated by the relatively small number and high asking prices of apartment properties available for sale.

“The last three months have been the same story—it has been another month of disconnect between rising prices and falling deal volume,” James Costello, senior vice president for RCA, said in October.

The outlook on occupancy rates remains stable compared to 2016, although sentiment has eroded slightly in the four years of compiling the survey. Overall, 50.3 percent of respondents believe that occupancies will continue to rise over the next 12 months, while 26.5 percent expect occupancies to fall and 23.4 percent foresee no change. Those numbers are virtually unchanged from the prior year. In 2014, 57 percent expected occupancy rates to continue to rise.

The picture is similar on rents. There remains overall bullishness that fundamentals will continue to improve, but the level of optimism is a tick lower than in years past.

Recent metrics are showing apartment rents growing more slowly than before. The cities where rents grew the most in 2016 are still top cities for rent growth this year, but their lead is getting smaller.

“A year ago there was a pretty big spread between Houston, which had rent growth of about 1 percent, and Sacramento, which was much larger—nearly 12 percent,” says Jay Denton, senior vice president with Richardson, Texas-based data firm Axiometrics.

Today, no major metro areas have annual rent growth of more than 10 percent. Rents are still growing the most in markets with new jobs and relatively few new apartments. Many of those markets are cities and towns that were hit hard by the housing crash. These are often places that have been growing in population. In addition, apartment developers have built relatively few new units in housing crash cities like Sacramento, Calif. and Las Vegas, creating less competition for tenants.

Rents grew just 2.2 percent on average in the U.S. over the 12 months that ended in the third quarter, according to a survey of 121 markets by research firm Yardi Matrix. That’s the slowest rate of increase since April 2011.

However, rents are still growing on average. “We don’t believe it’s time to turn out the lights on the expansion in the multifamily sector,” according to Yardi. “Job growth and social and demographic trends foretell strong demand for the next few years.”

Meanwhile, the markets where rents grew the most quickly in 2016 have slowed down the most in rent growth in 2017. For example, Sacramento still boasts the strongest rent growth in the United States. But its lead is shrinking. Apartment rents in Sacramento grew by 6.9 percent over the 12 months that ended in the third quarter 2017, according to Axiometrics. During the same period a year before, rents rose by nearly 12 percent.

Part of the reason for the limited rent growth in Sacramento is that while the city’s population is growing quickly, much of the net migration is from immigrants who are taking relatively low-wage jobs. “You see service workers. Their salary and wages are quite low, but they are renting,” says Douglas Ressler, director of business intelligence for Yardi Matrix. These workers are not able to pay double-digit rent increases year after year. Sacramento also benefits from an influx of people priced out of the San Francisco Bay Area.

Fears of overdevelopment decreased compared to a year ago. Overall, 36.5 percent of respondents said they would characterize the current level of development as “too much.” That’s down from 46.4 percent who answered that way in 2016. In addition, 39.1 percent said the right amount of development is occurring, while 15.2 percent said two little development is taking place. (The last figure nearly doubled from a level of 7.8 percent in 2016.)

That reverses a trend from previous surveys where the concern for overdevelopment had been ticking up. It started at 28.4 percent in NREI ’s initial survey in 2014 and rose to 35.2 percent in 2015, before peaking at last year’s level of 46.4 percent.

Experts point to areas like California’s Inland Empire and Midwestern cities including Minneapolis—far away from the core markets that have seen much of the new construction in recent years. Developers are also looking seriously at more niche product types in top cities, including larger apartments and townhouse developments.

“Developers are thinking much more strategically about how to differentiate the product because of the competition,” says Kimberly Byrum, principal for Meyers Research LLC, a housing industry consulting practice based in Dallas.

So far, developers have built relatively few apartments in California’s Inland Empire, including the towns of Riverside and San Bernardino, for example.

“The environment there is so suburban in character… The fact that so much development capital has chased urban core deals in this cycle has kept the Inland Empire under the radar,” says Greg Willett, chief economist for RealPage, a provider of property management solutions and software based in Richardson, Texas.

Developers have opened about 2,000 new apartments a year in the market over the past few years. That’s only a third of the number of new apartments that developers opened during the peak years of other construction cycles.

Developers may also find opportunities in several cities in the Midwest and the Rust Belt, since they have so far built fewer new apartments in “flyover country.”

“Minneapolis-St. Paul is probably most promising in this part of the country,” says Willett.

Developers have opened about 5,000 new apartments per year in Minneapolis in recent years, just a little more than the historic average, according to RealPage. “It’s not a lot of new supply for a place that has created roughly 300,000 jobs in this economic cycle, with many of those jobs coming in high-paying industries,” says Willett.

The state of capital markets

Respondents report a stable picture on the capital markets front. Nearly half of respondents believe that there has been no change in the amount of debt (48 percent) or equity (44 percent) available in the multifamily sector over the past 12 months.

Multifamily borrowers continue to tap a variety of sources for debt financing.

Fannie Mae and Freddie Mac were again scored as the top source for debt capital for the multifamily sector (7.2 on a scale of 10.) The GSEs were followed by local and regional banks (6.6), national banks (6.5), institutional lenders (6.4), the U.S. Department of Housing and Urban Development (5.8), REITs (5.7) and pension funds (5.7)

In terms of factors that could shape the capital markets going forward, more than half of respondents believe that loan-to-value ratios (61 percent) and debt service coverage ratios (60 percent) will not change over the next year.

Nearly half of respondents (49.8 percent) also said the risk premium would increase. Another 38.3 percent said it would remain the same, while 11.8 percent believe it will decrease.

Meanwhile, respondent views on the best regions for multifamily investment shifted slightly compared with past surveys. While the West remained the top market, scoring 8.0 on a scale of 1 to 10, the South (7.7) surpassed the East (7.6) for the number two slot. The Midwest remained fourth at 6.7. The West has been the top market in all four surveys, while the East had occupied the second slot in 2014, 2015 and 2016 before slipping this year.

Bendix Anderson contributed to this story.

Research Methodology: The NREI research report on the multifamily sector was conducted via an online survey distributed to NREI readers in November. The 2017 survey results are based on responses from 430 participants. The majority of respondents hold executive-level titles at firms.