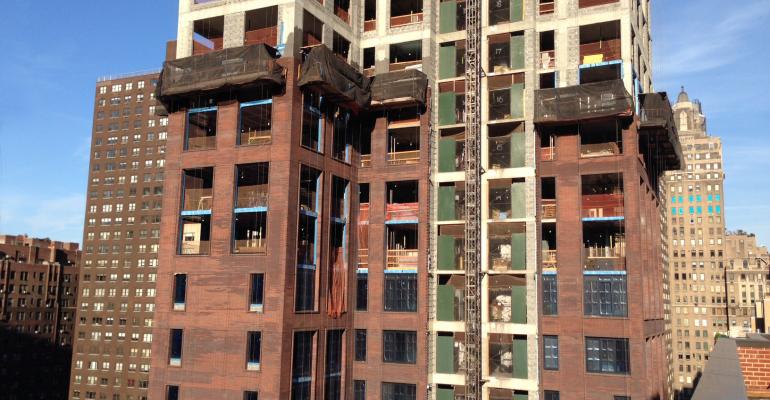 Banks are eager to lend money to apartment developers to build new apartments. “We still get a number of bids for every deal—four to six or more,” says Michael Riccio, co-head of national production for CBRE Capital Markets.

Construction lenders seemed on the brink of tightening their lending standards earlier this year. Experts worried too many apartments were already under construction and vacancy rates were about to rise. But this spring, demand for apartment properties continued to grow, powering yet another strong season of rising rents—and construction lenders are eagerly making loans to new development projects.

Developers are expected to open 230,000 new apartments this year, according to New York City-based research firm Reis Inc. In comparison, the average number of new apartments produced in a year over the last few cycles is just 120,000. Experts thought all the new supply would stop the fast growth in apartment rents. The year isn’t done yet, but rents seem to have kept rising very quickly.

“Everyone thought things weren’t going to be as good as it’s been,” says Riccio. “The fundamentals still look pretty good. The apartment market has been much more resilient that we thought.”

“You will have a number of lenders offering financing no matter where,” says Riccio. That includes nearly all property markets—with the possible exception of more troubled markets like Houston and Washington, D.C. “Houston might be the outlier,” Riccio adds.

Most of these construction loans are made by banks—local, regional and national. Insurance companies also offer construction financing, although these loans are likely smaller, and cover only 60 to 65 percent of the cost of construction, compared to the 70 to 75 percent leverage offered by banks. Insurance company lenders concentrate on the same top properties and top markets that they focus on for their permanent lending. They often offer these top development projects “temp-to-perm” non-recourse financing, sometimes including a low, fixed interest rate for the whole life of the loan.

Banks still offer non-recourse financing for lower-leverage loans. Many banks will offer to make smaller loans that cover less than half of the cost of construction without requiring the loan sponsor to guarantee to pay the loan from their own resources, if necessary. Several banks in New England will make even larger non-recourse loans that cover 60 percent or even 65 percent of the cost of construction.

The interest rates offered by construction lenders seem likely to stay very low, even after the Federal Reserve raises its benchmark interest rates, as it seems increasingly likely to.

Over the last 12 to 18 months, lenders have consistently offered interest rates for construction financing of 200 to 250 basis points more than the one-month London Interbank Offered Rate (LIBOR). “Most interest rates settle at around 225 basis points over LIBOR, says Riccio.

Currently, one-month LIBOR is close to 20 basis points, and doesn’t show any sign of moving. “It’s been below 20 for a year,” says Riccio. That works out to all-in floating interest for new construction loans that currently average about 2.5 percent, which is about where they are likely to stay for the immediate future.

Federal Reserve officials have nearly promised to raise their benchmark interest rates by a few basis points this year, perhaps as soon as their September meeting. Recent economic reports don’t seem to include any news bad enough to make the Federal Reserve delay its plans. However, the markets don’t predict much of an increase in LIBOR in response to the first rate hike.

“The Fed move won’t effect short-term rates,” says Riccio. “We will not see that kind of movement in LIBOR.”