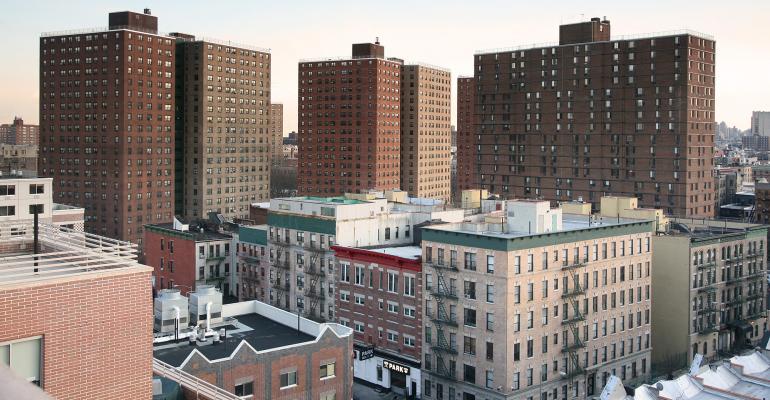 For the residents targeted by the city’s affordable housing program, rents would have to fall much more to make any difference. The pandemic, meanwhile, is taking a bite out of the city’s revenue, with businesses shut down and some residents moving to the suburbs in search of more comfortable places to quarantine.

“People shouldn’t be dancing in the streets if rents drop 30 or 40%,” Glen said. “You need a strong housing market for a tax base.”

The de Blasio administration has promised to preserve and build 300,000 affordable housing units by 2026 and is more than halfway to that goal. But the city is facing budget cuts that threaten the program. New York already has reduced this year’s capital commitment for affordable housing to $741 million, from $1.2 billion at the start of the year.

There hasn’t been this many apartments available in Manhattan since 2006 and the median monthly rent was down 16% in October to $2,868. That will help some in the short term, but ultimately do little to provide housing for low-income New Yorkers, according to Chris Leinberger, an urban real estate professor at George Washington University School of Business.

“It’s not going to solve the problem,” he said, adding that the city needs to build as many as 500,000 more units.

New York’s affordable housing crisis is years in the making. Developers tend to focus on the more-profitable high-end, creating shortages of rental homes in a city where two-thirds of residents are renters. The city’s affordable housing program requires developers to set aside at least 20% of units for low-income residents in exchange for tax-exempt financing.

For a family of three earning 50% of AMI, or about $51,000 a year, a two-bedroom would cost roughly $1,100 a month. But the process of getting an apartment can be lengthy and frustrating.

Alisa Noboa is one of the thousands of New Yorkers still waiting. The 28-year-old has been entering housing lotteries for two years. Despite meeting the income requirements and having a stable job as a receptionist, she has yet to be selected.

“It’s bothersome that I put in the work and have yet to be considered,” said Noboa, who lives with her mother, daughter and sister in an apartment in the Bronx. “I am happy, but I would like to have my own place already.”

As the city looks to add affordable units, it’s meeting opposition from residents across the city who are opposed to new construction. The latest effort is in Manhattan’s SoHo neighborhood, where rents are among the highest in the city.

The city wants to update the neighborhood’s zoning, which dates from when the area comprised warehouses and factories. It would allow for approximately 3,200 new housing units, including several hundred classified as affordable.

“Soho is a prime example of an underbuilt neighborhood,” said William Thomas, a board member of pro-housing development organization Open New York. “We want as much housing as we can get.”

Local residents don’t see it that way, a common response to development proposals that would add housing density. In the meantime, potential coronavirus vaccines are raising hopes that New York will bounce back in 2021.

“All the things that made New York the best city in America will be true again if we don’t screw it up.”