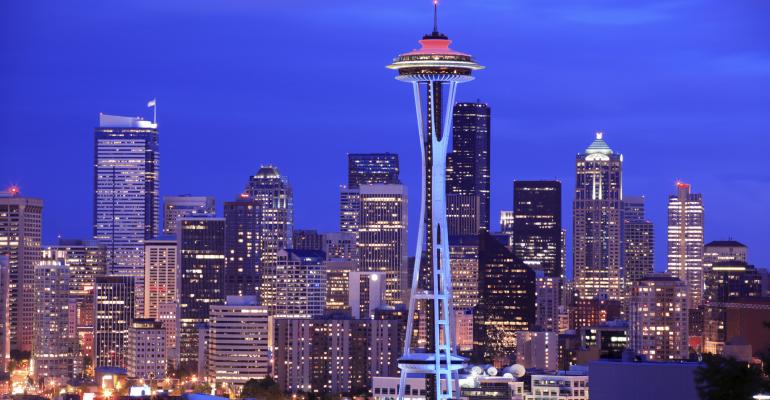 The city paved the way for taller buildings on the site just last year as part of a broader plan to ease an affordable housing crisis.

(Bloomberg)—Pearl Jam, Soundgarden and Macklemore played there, as did the greats of an earlier era, such as Duke Ellington and Muddy Waters. Now, there’s a plan to tear down Seattle’s iconic Showbox theater to make way for a 44-story apartment tower -- and the city is erupting.

For a town that prides itself for its outsize musical history, from Jimi Hendrix to the Grunge scene of the 1990s, the proposal represents the ultimate growing pain: Should a venue that helped make the city so cool be razed to build more homes for tech workers? It’s a question that keeps arising in one of the nation’s hottest property markets.

Since the plans were made public in late July, more than 90,000 people -- equal to about an eighth of the city’s population -- have signed an online petition to designate the venue a historic landmark. Dozens of prominent musicians -- from Death Cab for Cutie frontman Ben Gibbard to Katy Perry -- have voiced their opposition to the demolition. The city council scheduled a vote Monday on a measure that would protect the theater. The mayor is trying to broker a deal with the developer to save the venue.

As an employee of the Showbox told the council at a hearing on Wednesday, “It’s literally a battle between culture and profit.”

But lost in the public uproar is a more nuanced tale -- full of contradictions. The city paved the way for taller buildings on the site just last year as part of a broader plan to ease an affordable housing crisis. And the theater itself is far from a charity case. The building is owned by a strip-club magnate who leased it to a global concert promoter and now wants to cash in, selling to a Canadian developer.

“There’s no little guy that we’re rooting for here, other than musicians who get to play the Showbox,” said Kevin Schofield, a former Microsoft Corp. manager who now writes a blog about city council. “This is a big business deal between big corporations.”

Seattle was primed to have a debate like this. For nearly two years, the city has had the fastest home-price increases of any big U.S. metro area. More cranes tower over its skyline than anywhere else in the country. It’s drawn tens of thousands of transplants -- many highly paid professionals -- over the past decade as companies including Amazon.com Inc., Facebook Inc. and Google parent Alphabet Inc. built out operations. As new offices and apartments go up, dozens of local haunts have been forced to relocate or close.

What’s so striking about the reaction to the Showbox, however, is how swiftly the opposition mobilized, spurring elected officials into action. Adding to the pressure, Pearl Jam led chants of “Save the Showbox” during its sold-out show at Seattle’s Safeco Field on Friday. Popular musicians have also taken to Twitter to voice their opposition.

GEMINI @macklemore Seattle, we gotta save the Showbox. Start with the petition. Ima do some more research.... change.org/p/city-of-seat…

Death Cab for Cutie @dcfc We’re not going to take this lying down. The Showbox is an intrinsic part of what has made Seattle a focal point of American music for decades. We’re working on it - watch this space for information on how you can get involved in preventing this travesty from taking place. The Stranger ???? @TheStranger Yesterday, the Showbox turned 79. Today, its demolition was announced.thestranger.com/slog/2018/07/2… http://twitter.com/TheStranger/statuses/1022197958479990784

Duff McKagan @DuffMcKagan Stand up for history, #Seattle! Call your city councilor and let them know you want to #savetheshowbox @ShowboxPresents

Plans for the site leaked in the Seattle Daily Journal of Commerce on July 25, outlining how Vancouver-based developer Onni Group filed with the city to build a 442-unit residential tower on the site after buying it from Roger Forbes, a businessman who has interests in strip clubs. A division of AEG, a powerhouse in the global concert business, said it plans to continue operating the music venue while the proposal progresses.

Then, in a twist, Onni said it planned to nominate the building as a historic landmark. The move was seen as an effort to speed up the permitting process and head off a debate that was bound to happen. Onni had used a similar tactic as it redeveloped former Seattle Times buildings, according to the newspaper. Three local historic-preservation groups filed a separate proposal to nominate the venue as a landmark.

Outrage grew. On Aug. 6, socialist city council member Kshama Sawant introduced an ordinance that would have extend the boundaries of a historic district protecting Seattle’s iconic Pike Place Market to include the Showbox steps away. Passing the measure would have subjected businesses in the area -- from the boutique Thompson hotel to a smoke shop -- to stringent rules around everything from signage to ownership changes, while giving the city two years to study what to do next.

Large crowds turned up at council last week to voice support. The measure was ultimately amended so that it only includes the Showbox site and will last 10 months. While poised for a vote Monday, there are signs that it may be delayed.

Sawant dismissed the criticism that she’s working on behalf of a large concert business and stymieing development of housing. She said she ultimately wants the venue to be owned by the city. People who conflate this debate with Seattle’s housing needs aren’t advancing real plans to keep the theater, she said.

“This is about preserving the Showbox as a music venue; it’s not about AEG,” she said. “If we let the Showbox be demolished, then everything else is moot.”

The quick reaction shows how Seattle’s council continues to push measures that are politically popular but at-odds with the business community, said Schofield, the blogger. Just a few months ago, the council passed, then backed away, from a plan to tax large employers to raise money for homeless services. If the ordinance protecting the Showbox is approved, it could very well provoke a lawsuit, Schofield said.

“There’s a very strong legal argument that that would constitute a government taking,” he said. “The government can’t take private property without due process of law and appropriate compensation.”

A representative for Forbes declined to comment. Duncan Wlodarczak, a representative for Onni, said the developer is in ongoing discussions with the city to nominate the site as a landmark and that it looks forward to working with “all stakeholders” as it explores opportunities for the property.

For councilmember Lisa Herbold, the Showbox debate reflects the kind of balancing acts faced by many booming metros.

“A lot of fast-growing cities are dealing with this tension between how you grow and change -- and we have to grow and change -- but how you also preserve the things that are bridges to your history,” Herbold said. “I think it’s really important to maintain some of those bridges.”