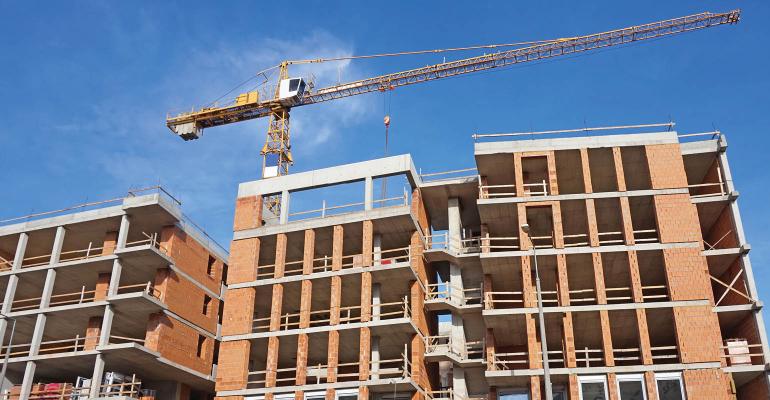 (Bloomberg)—U.S. new-home construction picked up in October on a rebound in apartments and other multifamily housing, offering some hope that the market is stabilizing despite rising prices and borrowing costs.

Residential starts increased 1.5 percent to an annualized rate of 1.23 million from the prior month’s upwardly revised 1.21 million, government figures showed Tuesday. While that matched the median estimate of economists, single-family home starts fell for a second month. Permits, an indication of future construction, fell 0.6 percent to a 1.26 million rate, also in line with projections.

The data suggest that builders are seeing steady demand from buyers amid a solid labor market and tax cuts that have boosted take-home pay. Those are cushioning the impact of mortgage rates at an eight-year high and home prices still outpacing wage gains. An easing in lumber prices from a record earlier this year may also be providing some relief to developers. At the same time, the figures followed a report Monday showing the biggest drop in homebuilder sentiment since 2014, indicating developers are becoming less optimistic that future demand will withstand headwinds. The increase in starts was concentrated in the more-volatile multifamily category, such as apartment buildings and condominiums, which rose 10.3 percent to an annual rate of 363,000. Groundbreaking on single-family homes fell 1.8 percent to 865,000. Housing starts rose 4.7 percent in the South, the largest region, to an annualized pace of 596,000; they also increased to a five-month high in the Midwest while declining in the West. Starts fell to 87,000 in the Northeast, the lowest since May 2017.

What Our Economists Say...

Rebuilding efforts after Hurricane Florence have masked a broader housing-sector slowdown. Historically, housing-market downturns have been among the first signs of a more expansive economic downturn. The recent series of weak housing data has sparked concern about risks to the broader economic outlook. We view such anxiety as premature, and project the housing market to get a second wind once growth in personal income eclipses the pace of home-price increases, providing a boost to affordability.

The number of homes under construction rose to 1.14 million, the most since July 2007. The data show a wide margin of error, with a 90 percent chance that the October housing-starts figure was between an 11.4 percent drop and a 14.4 percent gain. The report is released jointly by the Census Bureau and Department of Housing and Urban Development in Washington. Read more from Bloomberg Businessweek: Free Vacations, $100,000 Discounts: Homebuilders Get Desperate, and from Bloomberg Economics: Housing to Evade Recession on Affordability Upturn