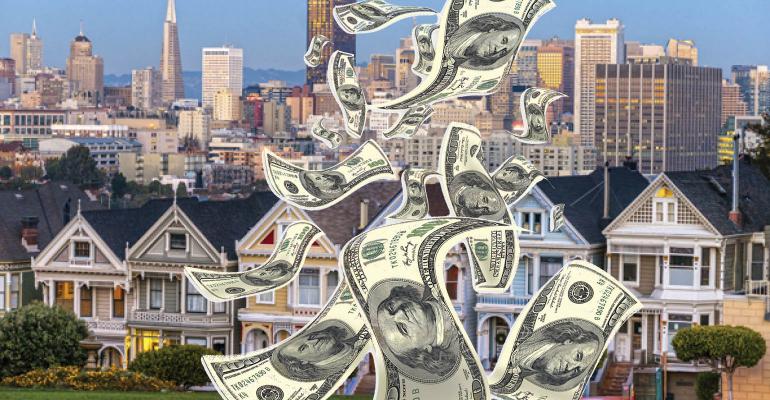 (Bloomberg Opinion)—During the past few years, it has become clear that housing affordability is a major challenge facing the U.S. Rent is consuming an increasing percentage of consumers’ paychecks:

The problem has become especially acute in big cities and technology hubs like San Francisco:

One of the most popular solutions being proposed is zoning reform. Rules that limit density — especially single-family zoning — restrict the amount of housing available near a city center, and make it difficult for people of modest means to live near transportation hubs and employers. When Minneapolis recently voted to end single-family zoning, it was hailed as a victory for racial and economic justice. Meanwhile, presidential candidate, Senator Elizabeth Warren, has made zoning reform a centerpiece of her housing affordability bill. Even Housing and Urban Development Secretary Ben Carson has vowed to attack restrictive zoning.

But a new paper has zoning-reform advocates worried. The study, by urban planning doctoral student Yonah Freemark, is entitled “Upzoning Chicago: Impacts of a Zoning Reform on Property Values and Housing Construction.” Freemark looks at recent changes in Chicago in 2013 and 2015 that permitted increased density and eliminated mandatory parking in certain areas of the city. He found that in those areas, land prices rose quickly, but new construction has yet to materialize.

The study will certainly give ammunition to skeptics of the idea that building more housing will improve affordability. But the finding is limited in several ways. Most importantly, it doesn’t look at rents. It’s perfectly possible for upzoning to increase the value of land because it allows bigger buildings, with more rental units or condos, to be built on that land, while not increasing the rent that current tenants are paying. Second, it doesn’t measure the citywide effect of the reforms.

But most importantly, the finding that construction didn’t increase raises the question of why prices went up. Why would a parcel of land become more valuable as the result of upzoning, if the buildings on that land remained the same? The obvious answer is speculation — because more dwelling space  can now be built on that land, its value is higher, even if the buildings haven’t been built yet. It’s possible that the speculation is irrational — a local bubble — and that the construction will never materialize. But it’s also possible that construction simply takes more time to get started.

Despite these limitations, the paper implies that increasing housing availability should involve more than just allowing more housing to be built on a parcel of land — it should involve strong incentives to build more units quickly.

Newly elected California Governor Gavin Newsom has some ideas for how to do that. His plan involves a combination of tax credits and loans for housing developers and grants to local governments to help them meet density targets. In addition, the governor wants to withhold transportation funds from cities that don’t meet state-mandated housing requirements.

The first is a land-value tax. This is basically an increased property tax with exemptions for construction and other improvements. The idea is to force urban landowners to use it or lose it — if they don’t develop their property, they would simply be taxed for holding unproductive land. The idea, first conceived by 19th century economist Henry George, would be difficult to implement in California, where the state’s infamous Proposition 13 creates an effective cap on property taxes. But other areas could experiment with this approach, as the cities of Washington and Pittsburgh have done with decent results.

The second idea is public housing. In the middle of the last century, the U.S. built many housing projects for low-income Americans, but these became potent symbols of urban decay, riddled with crime and other social problems. But cities like New York City and San Antonio are now trying new approaches to make public housing safer, including better designs and more community programs. So far the results are encouraging.

Finally, the government can assist people in creating housing co-ops — buildings owned and managed collectively by the residents. Without a landlord to take a cut of the cost of housing, co-ops can offer tenants greater affordability, stability and sense of ownership. City governments, through agencies like New York City’s Urban Homesteading Assistance Board, can encourage co-ops with loans or other financial assistance that allows tenants to buy out their buildings from their landlords. If cities really want to be assertive, they might be able to use eminent domain powers to force landlords to sell at a reasonable price, then resell cheaply to co-ops after using public money to spruce up the properties.

So there are plenty of options to create more affordable housing in American cities. Upzoning by itself may not be a cure-all for the rent crisis, but it’s an important way to open the door for greater density to follow.

Noah Smith is a Bloomberg Opinion columnist. He was an assistant professor of finance at Stony Brook University, and he blogs at Noahpinion.

To contact the author of this story: Noah Smith at [email protected]